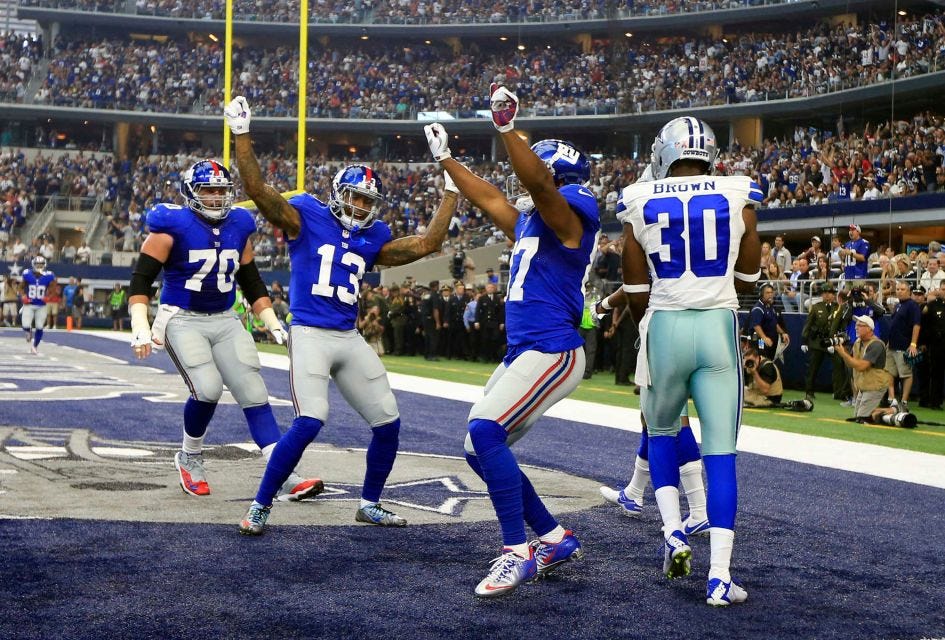 After a reality check loss in Pittsburgh, Big Blue face a similar challenge – except this time it’s at home on prime time TV against their biggest rival. The Cowboys have been flawless since the Giants got away with a W to open the season (thanks Terrance Williams) & they’d undoubtedly love to clinch the East, along with the NFC’s top seed, on the turf of the one team to beat them. If the G-Men are gonna sweep, it’ll once again come down to whether or not Eli Manning can revive a passing attack that’s gone ghost.

There’s no question the Giants will have their hands full with Dak, Zeke, Dez & an offensive line that’s simply the best. Dallas does what they do by dominating the line of scrimmage & wearing defenses out by pounding the ball. Le’Veon Bell ran for 118 last week but took 29 carries to do it. Big Blue still allow just 3.6 yards/carry & Zeke hasn’t run for 100 in 3 straight. Keeping the ROY from running rampant is the obvious game plan for every opponent, and a big way to do so is to keep him off the field.

The Cowboys & G-Men are at opposite ends of the spectrum when it comes to time of possession. Makes sense considering Dallas runs 10 times more per game for well over twice as many first downs as NY. If the Giants are gonna keep the chains moving, Eli has to be the best player on the field against a secondary giving up catches at a 70% clip for over 275/game with just 4 picks. Another erratic sub-200-yard game won’t cut it. He’ll need to maintain composure behind his line & use all his weapons. Vereen’s return should certainly help IF the Giants include him. Either Cruz or Shepard have inexcusably been left without a target in the prior two weeks.

Couldn’t pick a worse time for JPP to go down. With all the hype around the stellar seasons out of Collins & Vernon, you can make a case that JPP has been their best defender. Sacks & pressures aside, a shortage of fingers hasn’t affected his ability to also make plays on the football. Only #90 ranks in the top 3 among DE’s in both forced fumbles and passes defensed. Big hole in a big game against such an accurate QB. Okwara, Wynn & Odighizuwa out at the same time won’t match JPP.

In terms of the playoff picture this isn’t a do-or-die contest – although the Skins W tightens things up – but it’s about time the Giants put together a complete game on both sides of the field against a quality opponent. That means the offense has gotta show up instead of relying on their D to continue their stellar red zone play with one of the league’s most efficient teams here to avenge their only blemish. Prescott’s already gonna be playing in unfamiliar elements as temps don’t drop to near-freezing too often in Dallas or the SEC. Hang a lead on his Cowboys and let’s see how the kid responds to a taste of adversity he’s yet to face as a pro.

Or maybe it’s just as simple as Beckham setting a better tone & turning the tables in tonight’s pregame tickle fight rematch vs Dez.