So it is in that same vein that I present to you some of my findings regarding the many connections between pizza gate and the NFL.

For those of you who may not be not living under a rock- Pizzagate is a series of very coincidental coincidences that connects many high-level democratic operatives with ordering pizza once every like 6 months and also satanic pedophilia and child-trafficking. But just like TV ratings, our nations internet sleuths have been spending more time paying attenton to politics then the NFL, and by doing so I believe they may of missed some very compelling evidence that points some very ugly fingers (no offense to JPP) in some very ugly directions.

First of all its important to understand the evidence that pizza gate is very real and a true thing. For example, here is a list of the FBIs words that pedophiles use to cover up there disgusting acts: 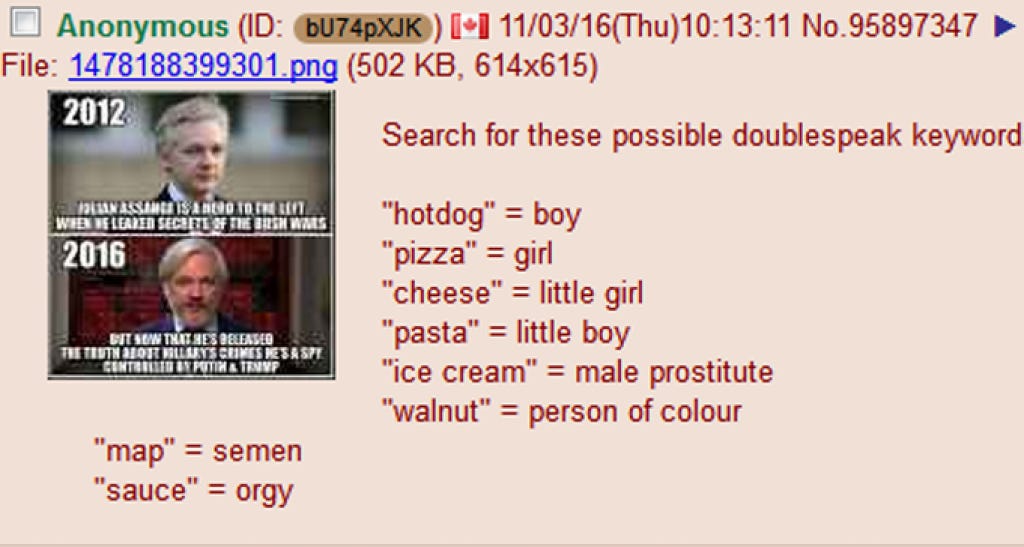 All of these words have been linked by the FBI to either food or also sex crimes. But as our nations eyes have turned to politics this election year, we have taken our eye off the ball and spent to much time researching into the depraved wicked sex lives of our politicans and not enough time trying to dig things up on atheletes. In this election cycle, our politicians have served as nothing more then a bread and circus act designed to distract us from the real issues in America like the NFL. If we were use the same standards as the pizzagate investigation, and hold our most famous players half as accountable as we’ve been holding the Clinton political machine we might not like what we see. For example lets look at what NFL poster child JJ Watt has had to say about “pizza” which as we know, means “girl”

Hmm yes. Ingredients like “cheese” and “sauce.” Sound famliar? Granted, those are fairly common items in any restaurant but the fact that both him and Reigning Leave MVP Cam Newton like to load up on exlusiveley those toppings is enough to make you think for just a second: 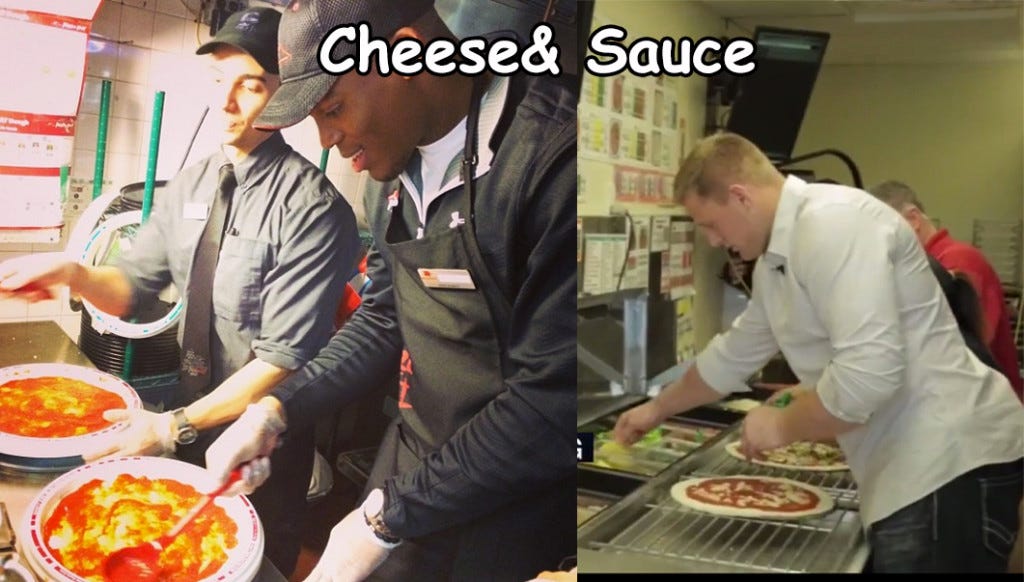 Am I saying that Newton and Watt are masterminds of some nefarous child trafficking scheme? Of course not. That would require a enourmous bankroll and vast resources that no single person would be able to provide. But if you follow the money you might not like where it leads. 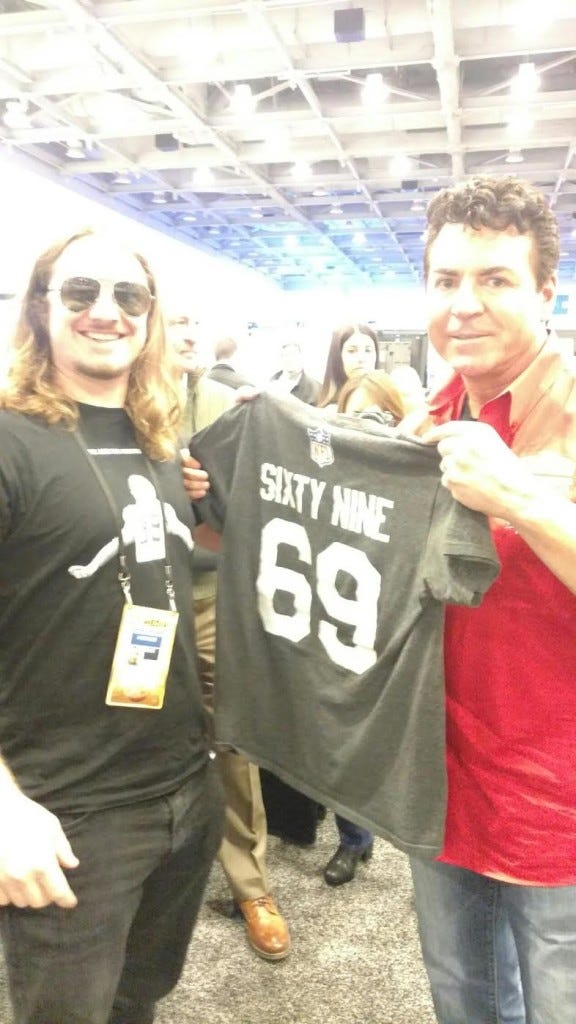 Papa John aka Papa John Schnatter of Papa Johns pizza has spent hours and hours talking on our television sets about how great this “cheese” aka possibly little girl and “sauce” aka orgy is every single NFL Sunday as the leagues official Pizza sponser. Papa John, whose name literally translates to “Biggest Prostitute Purchaser” is in front of millions of children every week and has teamed up as strategic business partners with Peyton Manning and JJ Watt.  Plus Schnatter rubbed our faces in it when they hired former San Francisco (city where theres alot of hanky panky) QB Joe Montana- whose last name just happens to be the state in the US with the youngest age-of-consent laws. Theres a reason Johnny Utah never got a lucrative endorsement like this.

And if you take a deep dive down into Papas Instagram account linked here, you see some truly disturbing things. Heres Papa Johns in a advertisement displaying dead bodies. What kind of Pizza place would have this? One that is in bed with sick occult practices thats who. 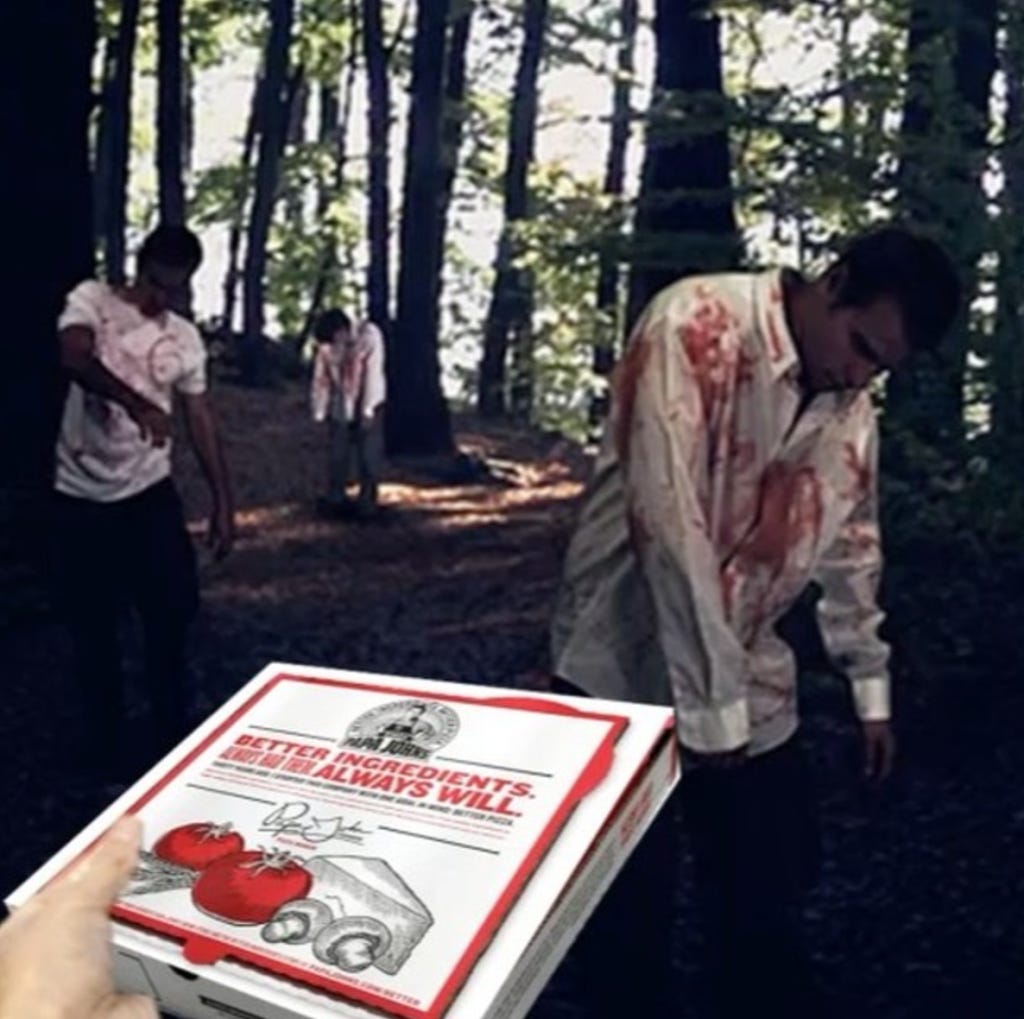 And then there are some very obvous signs that they know exactly what there up to:

As if all these dots werent lining up close enough for everyone I hope your buckled up. In addition to loving “pizza” and “Montana” JJ, Peyton,and Cam have also appeared in kids cartoons for gatorade together with another NFL player- Robert Griffin III who just so happens to be close busness associates with another fast-food peddler you may be familar with: 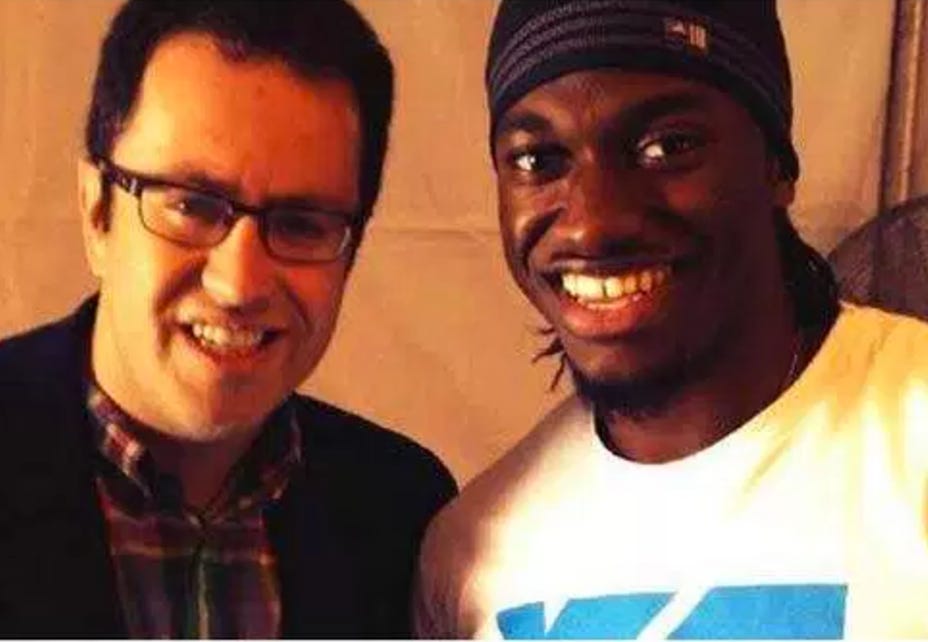 And as if all of this werent enough, J.J. Watt is seen here canoodling with Katy Perry, who as the internet has proven, is actually the abducted former child beauty queen JonBennet Ramsey who secretely grew up in a child trafficking ring outside Denver where Peyton Manning just happens to own dozens of Papa Johns pizzarias.

Is Papa John just your freindly neighborhood pizza merchant, or a evil mastermind of the sickest plot going on right now in America? I’m just asking questions- you can connect the dots folks: 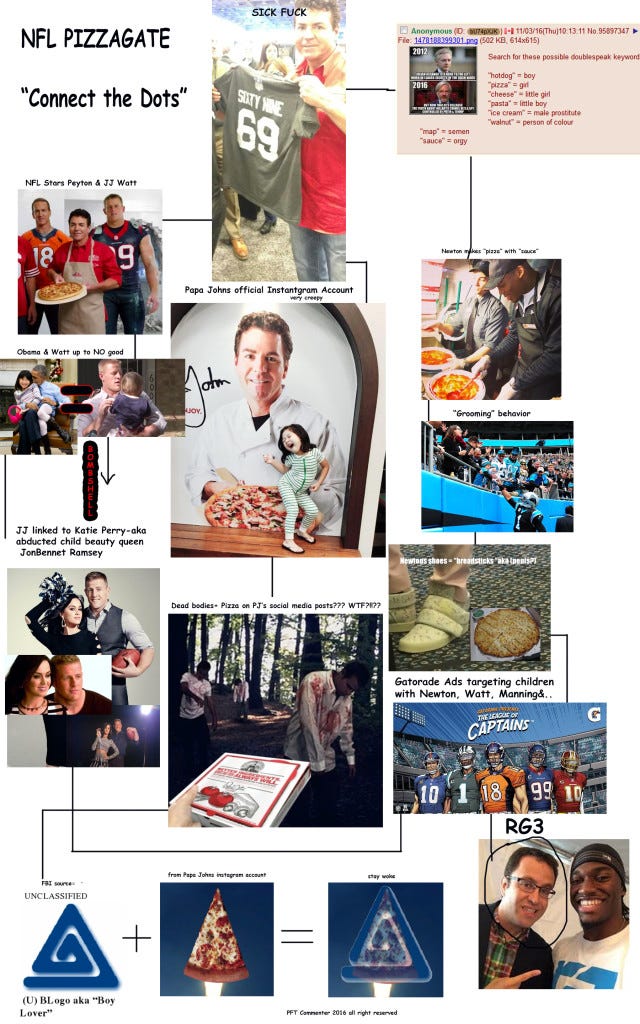 As a adult the only times its acceptable to hit children anymore is when your dressed up in a costume that they admire. Hopefully now with Trump we will say Merry Christmas and be able to beat kids when there outsmarting us with memes and pranks finally again. Kids have had it to easy for too long.

1. Chris Harris’ knees have been getting a pass and I’m ok with Harry Douglas diving at them. Coach always said you play through the “e” in whistle and the “L” in “oh shit whyd you do that you shredded my PCL this is extremely painful”. How come defensive players are allowed to dive at offensive players knees when making a tackle but offensive players cant take out a defensers patella tendon away from the ball? It should go both ways.

2. Listens to Cudi once: 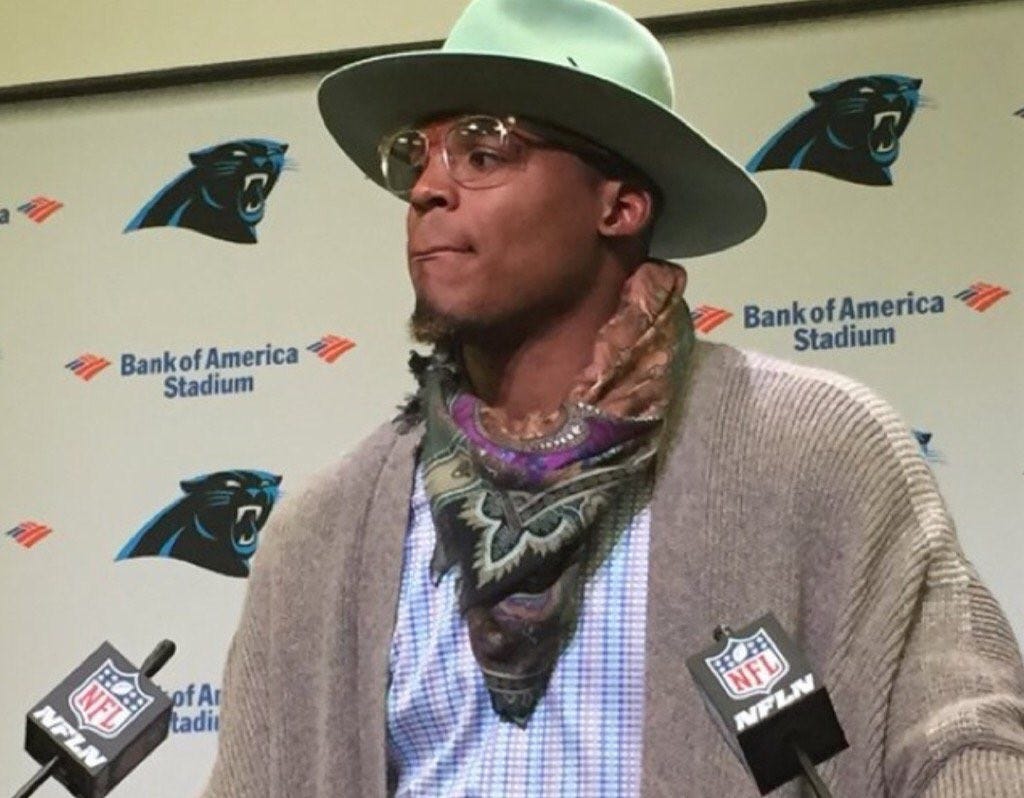 3.  Funny how all of the sudden the global warming alarmists are silent after there was snow in a couple of cities during football games that were on television. If global warming is real then how come I spent money for my heating bill on wings and beers? Gotcha.

Snow football is the absolute best but making excuses for why the snow made you play poorly is the absolute worst. Just because you play in a snow game dosen’t mean that your gritty. Its not a precipitation trophy you still need to produce. 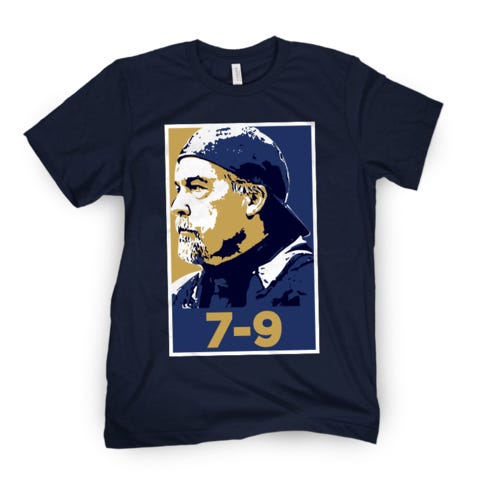 Allthough that might be a little optimistic for the Rams this year I’m still confidant that Jeff can get things turned around in time to go 7-9 in 2017.

5. In keeping with his longstanding practice of ignoring brothers, Aaron Rogers has basicaly only been targeting Jordy Nelson and Aaron Ripkowski.

6. I know that Jerry Jones has given Dak Prescott a long enough leash and its time to yank him. First of all- his names Dak which isnt really a actual name. It sounds like lacrosse bro had sex with an eraser. The Dak-ota Pipeline sprung a leak and Tony Romos on the sidelines with a welding torch and a hard hat ready to put the pieces back together. Ask yourself this- who would you rather have on your team in the playoffs- a talented but ultmately somewhat limited QB whose liable to turn the ball over at the most important times or Tony Romo?

7. Rex Ryans head is reportedly on the chopping block up in Buffalo and if Im the Bills theres no way I pull the trigger simply out of a concern for public safety. As it stands under Ryan, the Bills are a 8-8 kind of team which is perfect for Buffalo. You win anymore games and your risking a potential home playoff game at some point which would result in hundreds of deaths from tailgating to hard. If you start to dip back inot the 5-11 range consistently then your risking alcohol poisoning on the other end of the spectrum. Go 8-8, beat the Patriots once every couple years, and treat every loss with a vagueley canadian sense of acknowledging that you probably didnt deserve to win. Thats what we love about you Buffalo.

Obviously if Jeff Fisher becomes avalable you have to take a look though.

8. Speaking of Jeff Fisher, Todd Gurley is blasting the Rams coaching and saying that they :looked like a middle school offense out there” since I guess they cant score no matter how hard they try.

9. Theres a bill proposed in Washington State that would allow Seahawks fans to bring guns to games which might be just the motivation Russell Wilson needs since he’s no longer shooting blanks. Unlike certain Seattle natives RIP Kurt Cobain, Russell has struggled to grasp the shotgun in recent weeks so maybe having 80,000 Seattlites armed to the teeth &jacked up on starbucks might force him to focus.

10. Kudos for Commissioner Roger Goodell for acting swiftly and thoroughly to debunk a baseless accusaton of ball-tampering in Pittsburgh. First and foremost, the Steelers are the leagues flagship premiere organization so Goodell owed it to them to squalsh any inaccuracies contained in the rumors put out in the press before they poisoned the well and ruined there good name. The balls that the Giants measured fell well within the parameters of the ideal gas laws explanation for deflation, plus youd have a hard time convincing me that Ben Rothlisberger would ever partake in any untowards activities whether it be with a young coed or a bag of footballs in a bathroom stall. He’s earned the benfit of the doubt.

69 of the week: You’re going to need a Nose Guard

I’m of the belief that if your going to wear number 69 in the NFL you should have to get the joke about why its so hilarious otherwise its a completely wasted gag. So shout out to Big J journlist Dan Steinberg of the Washington Post who asked Redskins D Lineman AJ Francis about his new number:

“For exactly the reason you would think,” he responded.