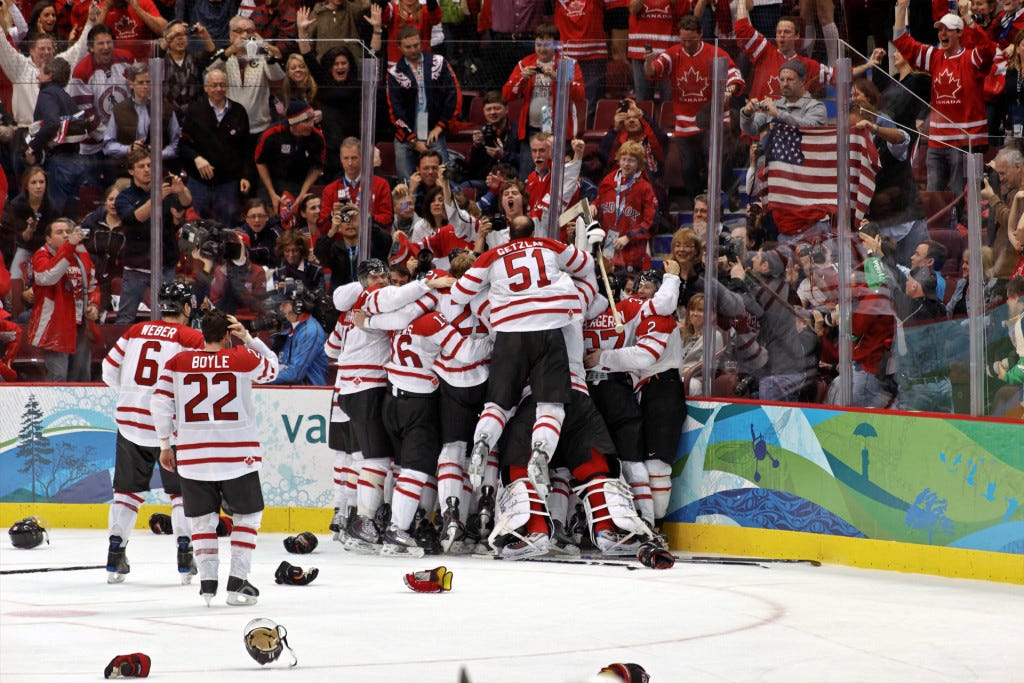 This isn’t a feeling that I’ve had for a while. In fact, when I woke up this morning it was the first time I ever thought to myself, “meh, who cares if the NHL participates in the Olympics or not?”. Because the way it looks right now, it seems like that’s the direction we’re heading. Gary Bettman and the Board of Governers had a meeting yesterday where they talked about the salary cap, escrow payments and Olympic participation. They talked about it, but they never voted on it. Why? Well because Bettman said there’s a “strong negative sentiment” towards attending the 2018 Games. The case against the NHL participating in the Olympics has been growing since Sochi but as we get closer to 2018, it’s starting to get more real.

So why am I okay with the NHL sitting this one out and maybe heading to the 2022 games in Beijing? Well because fuck Canada, that’s why. If you look at the potential roster for the USA team in 2018, there’s reason to be pretty excited. You get Auston Matthews, you get Jack Eichel, you get Johnny Gaudreau. You get a much better team than the US team that they threw together for the World Cup. But on the other side of that token, Canada gets McDavid and they get Ekblad and they still have the best team out there. And I’m sick of it. I get that Canada is essentially the Soviet Red Army team from the 70s and we all know how 1980 ended for the Americans. But still. I’m sick of Canada winning. Gold at Vancouver. Gold in Sochi. Gold at the World Cup. Gold at the last two World Championships. Canada Canada Canada Canada. I can’t take it anymore. I’m not saying that the United States couldn’t upset the Canadians in Pyeongchang. I’m just saying I like their chances a lot more when Crosby and Bergeron and the rest of those guys are all 4 years further removed from their prime.

The 2nd reason I’m totally fine with this is because of Alex Ovechkin. Ovi has said for years now that he’s playing in the 2018 Olympics no matter what. Whether the NHL participates or not, Ovi is playing for his country. Which would be perfect for Flyers fans because here’s the situation that plays out. The Washington Capitals can’t tell him he’s not allowed to just leave for 2 weeks to play for Russia in the Olympics. What are they gonna do? Sit him when he comes back? Yeah, have fun with scratching one of the best players in the world. He has all the leverage in the world here. So if the NHL doesn’t participate in the Olympics, that means the league won’t shut down for those 2 weeks which means that the Flyers could catch a break with one of the best players in the division missing 7 or 8 games.

Lastly, there will still be hockey in the Olympics whether the NHL opts out or not. If the NHL doesn’t send their players, then it just becomes another version of the World Juniors (which starts in 17 days). It’s not like not participating in the Olympics is going to prevent star players in the KHL from coming to the NHL either because they’re not getting paid in Russia right now. If they were getting paid and the NHL decided to opt out of the 2018 Olympics, I could see why guys would stay home in the mother land. But that’s not the case. So yeah, I woke up this morning and realized that the NHL not participating in the 2018 Winter Olympics wouldn’t be the worst thing to ever happen in the world. And I think you should too.