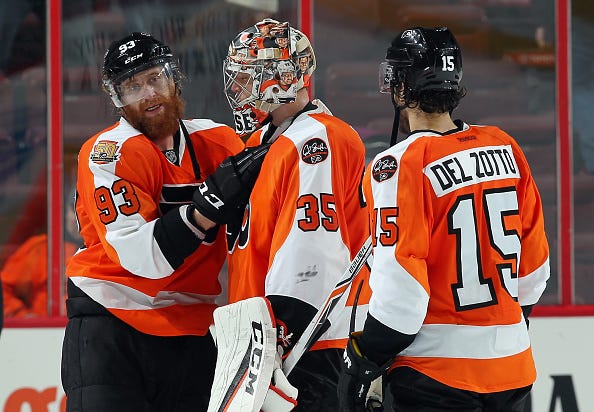 SIX (6) WINS IN A ROW for your Philadelphia Flyers. 6 wins in a row for a team that looked lost earlier in the season. A team who didn’t really have any identity besides sucking nuts in the 1st period. On the back of another 40+ save performance from Steve Mason and Wayne Simmonds asserting himself as the best power forward in the game right now, the Philadelphia Flyers have won their 6th game in a row with 8 more games left to play before getting a little Christmas break. Now here’s what worries me. The Flyers have played the most amount of games in the Eastern Conference right now. They’re the only team who has played 28 games and they have 8 coming up in the next 2 weeks. Their schedule has been wild and they’ve almost strictly been playing on 1-day rest or on back-to-back days. Obviously you can’t keep that pace up for the rest of the season, but I think it’s what’s working so well for the Flyers right now. They don’t have any time to stop and think about anything. They’re pretty much playing blackout hockey. Will the 5 days off between the Devils on the 22nd and the Blues on the 28th be good for their health? Sure. But I like what this team has going on right now. It’s just grind it out hockey and they’re relying on instinct at this point. It’s been working out great over the past couple weeks, which I guess it what makes me so afraid that things will turn south soon. But for now, WE’RE GOING STREAKING so let’s enjoy it.

Weezy F Baby and the F is for “Fucking dominate”

Tied for 3rd in the league with 15 goals. 8 of those goals coming on the powerplay. And back-to-back multi goal games for Wayne Simmonds. Somebody better purchase this man a direct flight to LA for the All Star Game this year or else heads will roll. Unreal the type of season Wayne Simmonds has been having himself so far. You throw a visor on the guy and all of a sudden he’s Johnny Fuckin’ LeClair. Now this year has been building up for a while. Simmer has been getting better and better each year that he’s been with the Flyers. But now the guy is a legitimate game changer.

You cannot take penalties against the Philadelphia Flyers and expect to win hockey games. That top unit is ridiculous. They’re operating at the 2nd best rate in the NHL and I don’t think there’s a single team in the league who wouldn’t love to have Simmer parking his ass right in front of the goalie on their PP1 unit. Eventually Schenn is gonna need to get a little more involved to make the Flyers’ powerplay an automatic goal but he did exactly what he’s out there to do last night on that Simmonds goal. He’s a facilitator. An outlet guy. Giroux protects the puck when he’s down on the ice. Schenn goes over to retrieve it, has the presence of mind to flip the ice and send it across to Voracek, powerplay stays alive and it’s in the back of the net less than 10 seconds later. Again, you just can’t take penalties against the Flyers or else you lose. 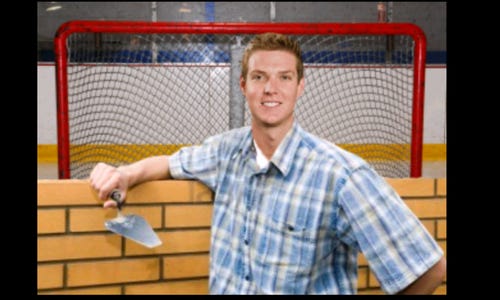 Steve Mason was just named the 1st star of the week in the NHL. Last week he had wins over the Bruins, Senators, Blackhawks and Predators. Again, that’s all just in a week’s work. And then he follows that up last night with a 42-save night and perfect against the powerplay. You know who does that??? Do you??? A goalie who can steal you a series in the playoffs, that’s who. So now we just have to pray that the Flyers training staff wraps Mason in bubble wrap under his pads because I am so nervous about an injury bug coming in here to ruin everything. As long as Mase is able to stay healthy, then I think you have to deal Neuvirth at the trade deadline and ride on with Mason taking 90% of the starts with Stolarz subbing in every now and then. The man is so dialed in right now it’s absurd.

And here’s the thing. The Panthers dominated the 1st period of play. The shots were 15-6 in the first 20. So obviously they were going to get one by Mase that period. That’s on the rest of the team for giving them so many chances. Then when the Panthers came out flying in the 3rd period down 2-1, the ice was shifted again. They were on full attack mode and Mason did everything he could to not give up the lead early in the period. He held on for 15 minutes but then the Panthers were able to get one back. But holding off until 5 minutes left in the period made sure that Florida didn’t have enough time to score another and end the game in regulation. That’s what you need in a #1.

It’s both beautiful and sad at the same time to see Jake Voracek out-Jagr Jaromir Jagr himself on the same sheet of ice. Jake was everywhere last night wreaking havoc, doing what he does best. He makes things happen but just couldn’t seem to find the payoff until the 3-on-3 overtime. Pretty filthy sequence all around from 53-28-93, but it was great to see Voracek pot home that game winner in front of his idol. Anybody who is a fan of hockey has the love the way Voracek plays the game. So much emotion is packed into every shift. He’s never afraid to show that he’s frustrated and you can tell what kind of night he’s having in the way that he skates. Last night he was on a mission to prove something. Guy is a maniac but he’s our maniac. Wouldn’t want it any other way.

Speaking of Jagr, however…. 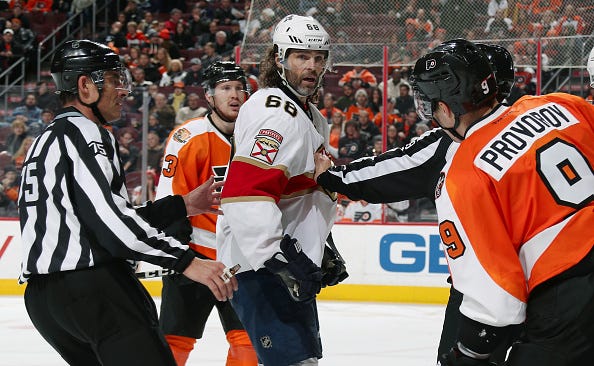 How about Provorov getting the legend a little riled up last night? What do you even do if you’re Ivan in this situation? Obviously Provy didn’t have anything to be sorry about since this was absolutely the right call to make against Jagr

Did Provorov go down a little too easy? I don’t know. Maybe, but it’s not like he was trying to sell it. I think what we saw here was frustration from one of the greatest in the game that a 19-year-old had been shutting him down all night. Jagr has finally reached the point where he’s not quite all there yet. And because he’s lost a step, he’s going to take a few more penalties trying to make up for it. Last night was another brilliant performance defensively from the rookie. He made a few huge 1-on-1 stops. Was able to win a few battles along the boards against Jagr and that’s where 68’s frustration comes in. That’s gotta be the biggest “I made it” moment for Provorov so far in his career.

Sidenote on Provy: he stole a save here from Steve Mason. Bad boy.

– Again, Andrew MacDonald had himself a pretty solid night all around last night. He didn’t do anything tremendously well, he didn’t do anything spectacularly bad either. That’s all the Flyers really need from AMac. Just get in there and get out with minimal damage. It’s a beautiful sight to see. He’s no longer the worst hockey player ever born.

– With Giroux getting a couple assists on the night, that gives him 25 points on the year. Simmonds is 9th in the league with 26, Claude is 12th with 25 and Voracek is 13th with 24. Still the 2nd best Big 3 in the NHL right now just behind Pittsburgh’s Malkin, Crosby and Kessel. Who are 3,4 and 7 in the league right now but that’s besides the point.

– Edmonton coming up tomorrow. Then another Saturday/Sunday double header against Dallas and Detroit this weekend. Buckle up, you sons of bitches.