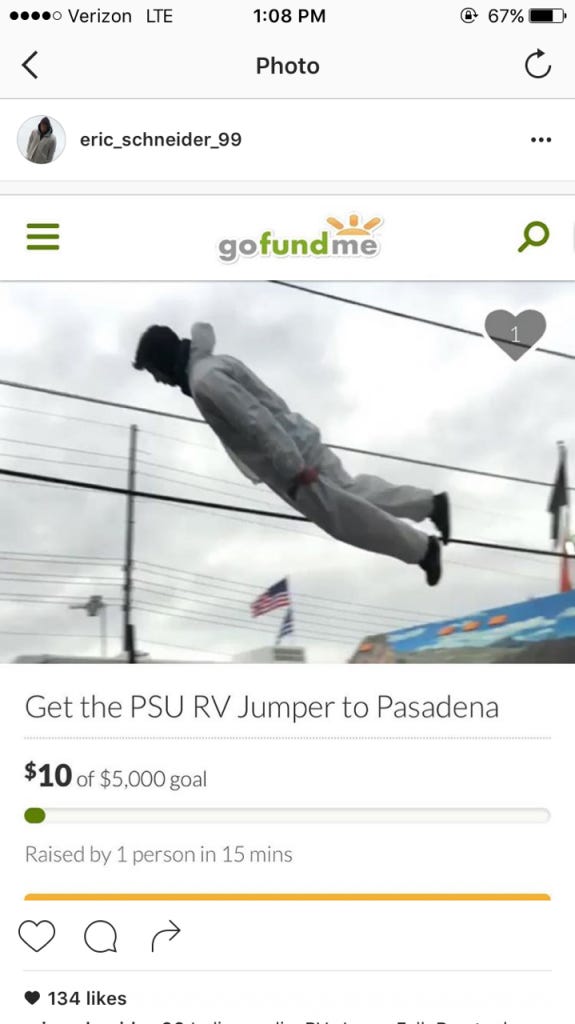 This guy is taking his 15 minutes of “fame” and sprinting with it, so who am I to trip him up? To me, if you make one of the best videos of the year at your own personal physical expense, you deserve a trip to Pasadena. I might be too liberal in my criteria of what it takes to earn a trip to L.A., but this guy basically stage dove with no crowd to catch him.

Here’s the kid’s pitch in his own words.

December 3rd, 2016 marked a historic day: Penn State became B1G Champs and Eric leaped his way to internet stardom.Lucas Oil Stadium tailgates were electric that day. Baggo games, grilled burgers, PSU cheers, and alcohol induced mayhem surrounded the stadium. A group of college buddies found themselves, along with their rented RV, in the middle of this chaotic day. This dangerous recipe created “the leap” that went viral.Click here for videos and summary

Before he made his leap this brave legend wasn’t thinking of the fame that would follow, he only had one thought: “Hold my beer, and watch this.”

Eric survived that day and as part of the group that trekked 12 hours for the game and “caught” him (sorry for dropping you, Eric), we would like Eric’s legacy to live on in Pasadena, CA!

We want to bring Eric to the 2017 Rose Bowl to watch Penn State take on USC. We are asking for donations from those who saw how great this jump was (and watched it a million times like we did on the way home). Any amount would be greatly appreciated. We’re just a couple students asking for any help to get Eric his wings to Cali.

I don’t know, I kind of respect it. Where I’m from we reward stupidity, so if you feel the same, pop on his GoFundMe here and push the kid along on his way to Pasadena. 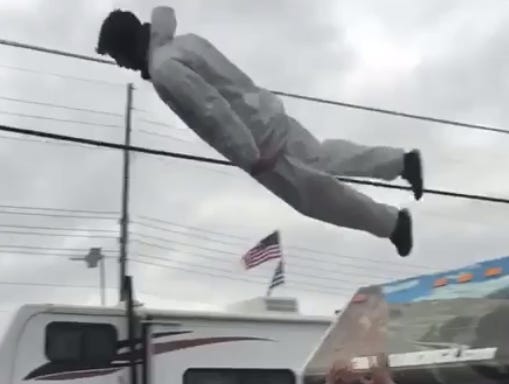