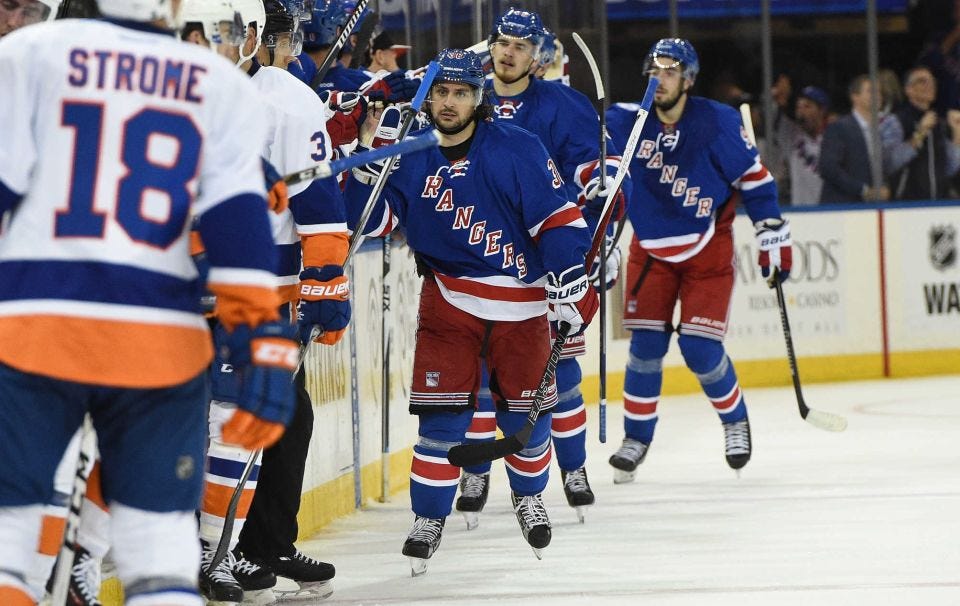 Almost 2 months ago, the Blueshirts opened their season with a 5-3 win over their local rival Islanders. Today, both teams bookend the Metropolitan division standings. The Rangers blistering start has encountered its expected regression though. After starting 13-4 they’ve basically alternated wins & losses since then while the Isles have begun to right the ship by taking 7 of 8 points, including wins over the Pens & Caps (thanks guys). Tonight’s tilt in Brooklyn serves as an opportunity for the Rangers to rekindle their momentum or Tavares & Co. to continue theirs.

Vigneault’s squad has certainly missed Zibanejad & Buchnevich – but they’re a long way from the collapse that occurred a year ago. The loss in Columbus a couple weeks ago on a late SHG was almost exactly a year after NY lost on a late shorty to Tampa after a 14-2-2 start. Last season, the Rangers never recovered & only won 5 of their next 17. This season they’ve maintained a .500 record since then. It hasn’t all been pretty but they’re still getting the job done.

Fancy stat fanatics are harping on the Blueshirts yet again – and they have a case. But over their last 5 games they’ve still managed to create about as many scoring chances as their opponents despite their Corsi deficiencies. If they were getting slaughtered in quality opportunities, that’s a different story. No doubt the loss to Buffalo was terrible but a pair of third period W’s over the Canes showed a level of fight that didn’t exist last year. They ran into a hot goalie vs Ottawa & steamrolled the Flyers before going into turtle mode for the final 20. A lot of teams can find success with their A-game. The true test of a good squad though is being able to find ways to win when you don’t have it. The Rangers have done so. There’s no need to panic.

That’s not to say it’s all roses. I don’t know what’s up with Kevin Klein but he’s been brutal. Still need help on the right side even if Optimus does return to form. Also, like all teams, health is key. The Rangers have plenty of depth on the wings but Zib’s presence is clearly missed up the middle. Then there’s Henrik Lundqvist. Let’s face it – he’s scaring the shit out of us. Maybe I’m spoiled by all the 0’s and 1’s in the goals-against column over his career, but The King’s ceded 2+ in 34 of 37 starts since his 34th birthday in March. This season he ranks 26th out of 34 goalies with more than 10 games in terms of 5×5 save percentage. He’s finished in the top-5 three times & never been out of the top-10 in his prior 5 campaigns among goalies that played at least half a season (that’s as far back as I looked on Puckalytics.com).

I’m far from the camp of “oh no Hank’s finished!” – but I’d be lying if I said I was as confident in his return to dominance as I was right after his poor finish to ’15-’16. Bottom line is, regardless of how stacked the Blueshirts may seem up front, they’ll still live or die come playoffs on the back of #30. Plenty of hockey left for Lundqvist to peak though, and no better spot to hang an old-fashioned goose egg than a trip to visit the Isles.