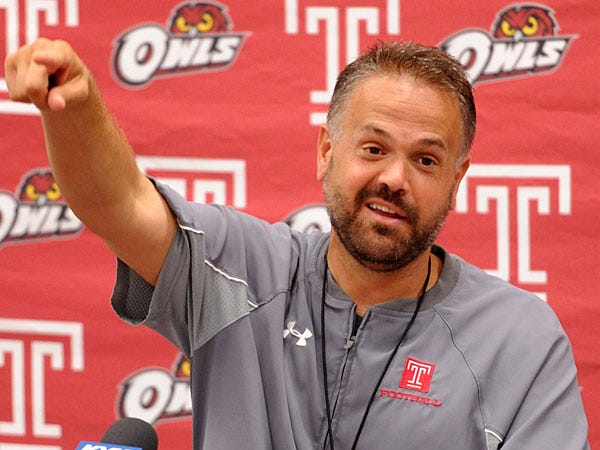 Fox – Temple’s Matt Rhule has accepted an offer to become the next head coach at Baylor, a source told FOX Sports on Tuesday. The 41-year-old Rhule just led Temple to its greatest two-year run in school history, winning 20 games. The Owls are coming off a dominant 34-10 win over Navy to wrap up the AAC title. Rhule will take over a Bears program that is reeling after a sexual assault scandal that cost head coach Art Briles as well as Baylor’s AD and president their jobs before this season. Jim Grobe took over the program and Baylor has gone 6-6, losing six in a row to end the season.

Annnnndddd yet again, Philly can’t have nice things. Damnit to hell. Is there no loyalty in this world anymore? Well, meaningful college football in Philly was fun while it lasted. And here I thought James Franklin having a resurgence in a make-or-break year sealed Matt Rhule’s fate at Temple, instead of logically booking to his alma mater in Happy Valley. I don’t blame him one bit. Rhule is only 41 and now has the chance to truly be big time…but, fuck. He was quickly becoming a Philly mainstay. I hate the way money talks.

It sucks, cause I think it’s safe to say that Philly has never been a college football town, and that SUCKS. Sure there’s PSU, Rutgers, Delaware, Nova, West Chester, and the D-III warriors, but it’s not the same. It’s a completely different story in this town for basketball, but Temple is really the only big D-1 school in the area that throws the pigskin around.

For generations the Owls have been worse than awful. I’m talking pitiful. The Bruce Arians era in the ’80’s was considered a monumental success because they hovered around .500 for a couple years (even though all the victories in ’86 were vacated). Bobby Wallace – who is a damn good football coach as evident from his multiple national titles at the D-II level – went 19-71 from ’98 to a winless 0-11 record in ’95. You can’t really blame him. College football is 90% about recruiting and nobody wanted to play for Temple because Temple, for whatever reason, never really cared. Hell, I think my overly whiteboy high school football career warranted a recruiting letter form Temple, and I run like a pregnant giraffe on quaaludes.

But then the likes of Al Golden and Steve Addazio (DUDES!!!) came in to change this culture around…before ditching Temple for Miami and BC, respectively. Now Matt Rhule has taken everything to the next level. Just a damn shame he’s leaving before he got a real chance to build this puppy of a program into a powerhouse. There’s a lot of talent to be plucked from around the Delaware Valley and beyond.

Temple may have unceremoniously ditched their baseball program and may never win a Final Four game, but dammit, if whoever they hire can keep big time college football in the limelight, it’ll be amazing. Or at least just keep bringing College Gameday back to Philly. The signs from the big game vs. Notre Dame last year were RUTHLESS. 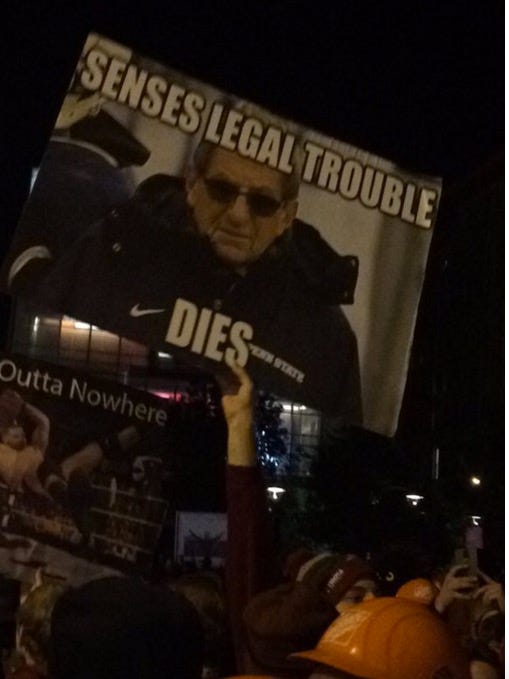 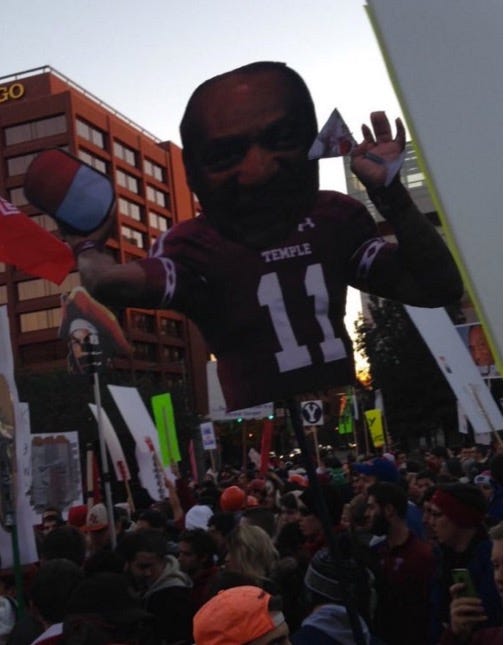