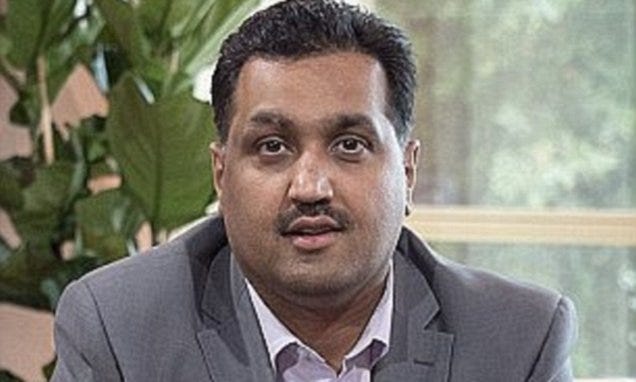 Source – Mohammed Abad received the £70,000 prosthetic replacement after suffering for decades when his manhood was damaged in a car crash in the 70s. The 44-year-old, from Costorphine, told a national newspaper that since his operation he has received 50 messages from women who want to sleep with him. He said: “I get a lot of messages from women online who ask if I will have sex with them…

…Mr Abad continued: “It’s not that I don’t want to (have sex) and I get offers but I have been so busy with work. I work 14-hour shifts every day and by the time I get home I’m just too tired for sex.”

We’ve been following the story of Mohammed Abad and his robot cock for quite some time now. And when you first hear about the story of a man with a bionic hang down, you think it’s all fun and games. You think to yourself that it’s a happy-go-lucky feel good story. Here’s a man who lost his dong when he was just 6-years-old and now he basically got a new lease on life. It’s pretty dang hard to feel bad for a guy whose meat stick is worth $75,000. But now? Well now I think I actually feel horrible for the guy.

Now here’s the thing. Sex is definitely dope every once in a while. I’m not gonna get up here and tell all you kids at home that it’s not. But just like anything in life, you can only have it in doses. Because when you really boil it down, sex is a physical activity. It takes actual real life physical effort. Some maybe put more effort into it than others, but it’s effort nonetheless. Does sitting at home in your boxers while binge watching Netflix and eating your weight in beef jerky take physical effort? Does getting drunk and playing video games by yourself for a while before you pass out take physical effort? No and no. For the most part, sex is a chore. You can mix in a jerk off session here and there and it’s basically the same result with about a tenth of the effort. But now this poor guy has all these women trying to fuck his brains out every which way, 24/7, 365 (366 days in a leap year). It’s impossible to keep up with that pace but he knows the world is counting on him and his robot cock to pull through and plow through all the poon he can. He got this incredible opportunity but the reality of the situation is that maybe his new dick is actually his downfall. Maybe life was better without a peen dawg. Because then he could just play Xbox all night long in peace without have every Felicia within a 100 mile radius trying to use him for his robo rod.