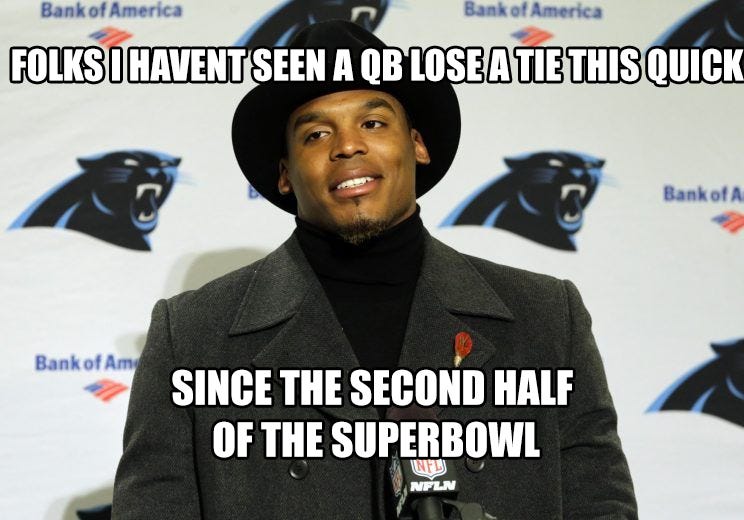 Over the past 10 years Roger Goodell has been unfairly accused of being a bloated arrogant souless sociopathic spoiled sad sack big bag of nothing but bones blood and boogers. Also many people have said that he’s physcally unattractive. But this weekend he tried to do something nice for players and give them a special four hour treat where they would be aloud to wear whatever their simple little hearts desired to as long as it was on the sides on their shoes and pre-approved by the league. Its like when your stepdad lets you watch one hour of TV on Saturday depsite the fact that you didnt score enough points in your basketball game and didnt play through a back injury.

So what should of been a great day of finding common ground between employee and very nice generous employer turned sour as guess who- Cam Newton- took advantage of Roger Goodells benevolent peace offering and made him look like a gullible fool. Goodell said “tell you what, I’ll let you kids wear whatever you want on your feet” and Cam Showed up looking like Robert Goulet just got out of jail no offense. Sadly this will only serve to ensure that the Commissoner will no longer allow players to express themselves in the future. You give them a inch and they’ll take a mile except in the case of the Rams who will look to just throw a bubble screen to Tavon Austin 3 yds behind the line of scrimmage.

Roger Goodell gave a mouse a cookie with the free-play weekend of wacky shoes, and now Cams demanding a glass of milk. Its a slipper slope to let these guys show too much personalty and thats why the ratings are down.Fans tune in to the national football league DESPITE the players, and the second were reminded that there anything less than crash-test robot dummies I quickly lose interest and get back to watching pornography. I actually think ratings would go up if Goodell supsended everybody and made them all appeal for reinstatement to cut down on the players who dont really want to be there and also on the many many instances of roster fraud. Now Goodells going to be forced to enhance furthrer policies limiting demonstrations of open expression and no one can blame him for it. He tried being the nice guy but he got taken advantage of, just like Ray Rice took advantage of him when he told him that the video wasnt even that bad and he didnt even have to look at it anyways probably.

There are many similarties between my job and Cams with the exception of the fact that I have never lost a superbowl. If I can wear a tie then its the exact same thing for Mr. Newton to put one on. Hey Cam- this is what true professonalism looks like: not to brag:

Not only did Newton disappoint his boss, but he let his coach down as well. Ron Rivera comes from a miltary background and Cam Newton is a infant whose more concern with looking GQ than GI. Dress Codes exist for a reason and thats to make sure that your team looks professonal at all times with no exceptions except obviously on the first drive of a actual game after your best player by far has committed a minor violaton of the dress code.

Its called a “dress” code and Cam got caught trying to skirt it. Folks I havent seen Cam run away from a tie this fast since the fourth quarter of the Superbowl. Is it any coincidence that Newton came out and played like absolute garbage mereley hours after not wearing a tie? The little things become big things. In other words- its called being a grower, not a shower- and Newton just ended up looking like a dick.

Road Grader of the Week: The Guy That Punched The Kangaroo

1. Rob Gronkowski is done. Finished. Career is caput. How do I know? Its his destiny to finish his career out at his current numbers. Here are his lifetime stats:

And in a touching parting gift, Rob leaves the Patriots with a 69% winning percentage in games he dosen’t play. He’ll be with them in spirit folks.

2. Lousivilles Womens basketball coach gets it. He went off on participation trophy culture which gives kids rewards depsite the fact that Im not happy with how various things are going in my life. The satisfaction you receive from not needing a trophy to feel satisfied should be reward enough. Also- how unlucky is it that Louisville apparently has to play a schedule made up entirely of teams that dont have any players at all that grew up getting particpation trophies? Talk about bad luck for that coach.

3. The NFL is finally taking my advice and allowing fans to attend the bench press and interview parts of the combine. I would personally love to be in attendence for the bench press portion hammered as hell and whoopin up a damn storm. They should let fans also ask questions to player’s since technically we pay there salaries that they’re going to earn one day as our employees.

4. I call Carson Wentz the Dakota Pipeline because he got shut down yesterday. The Birds rookie has gone from precocious to atrocious folks and I cant help but think its because his coach Doug Pederson wont stop wearing those funny visor hats with the fake hair coming out of the top of them.

6. Dont look now but Joe Flacco has flipped the Elite switch just in time for one of his signature playoff pushes. Joe is now a full year off a ACL injury. Not only did he domnate the Dolphins on Sunday, but in a huge scoop out of the Baltimore Sun, he then went and purchased a Christmas Tree from a firehouse. Stay woke on this one though folks because buying a dead tree for your house that your going to adorn with lights from someone who gets paid to put out fires is like buying afghan weed from a guy who makes funnel cakes and funyons.

7. Some more thought’s about CleatGate:

Allowing players to wear messages on there cleats is giving a participation trophy to them for knowing what a charty is. Half these “causes” probably were just hoaxes and things that can be cured with a copper back brace. Folks the NFL already allows teams to raise awareness for the less fortunate every single time a player puts on a Browns jersey.

A couple players simply opted to wear Christian messages on there shoes which in theory is good but in realty wearing a shoe to promote Christianty is like wearing a pork pie hat to promote islam. Jesus spent his life washing peoples feet and traveling barefoot. The only way to save your sole is through prayer, not by strapping on a pair of yeezys.

Plus players have been finding ways to get a round the leagues policies for years. When you look at Adrian Peterson and his like 6 kids, you realize he’s been getting paid to raise awareness of his sex addiction of through his sponsorship with A.D.I.D.A.S. And folks, maybe Darrelle Revis should draw attention to his work ethic this year by taking the feild in loafers.

Basically the shoes were used to raise all kinds of awareness and money to diseases like cancer and diabetes, when giving them this type of attenton is exactly what those diseases crave. Cardiovascular disease has been trolling Amerca for years and years & it seems we just cant stop ourselves from giving it a bigger and bigger profile. No one died from heart attacks back when we were cavemen and still thought that the sun was Gods butthole or whatever, we just called it big sleep and just thought dead people were lazy. The more we learn about diseases the more of them we discover- I dont know why people haven’t put any of this together. If you want to decrease the amounts of deaths attributed to new diseases all a player should of done is just wear cleats promoting ignorance. Problem solved.

8. Jeff Fisher has basically turned into the Rasputin of the 21st century. For those of you who might not be up to date on your Russian history (now might be a good time to brush up on that by the way) Rasputin was basically Sir Hiss form the Disney Robin Hood, or if you’ve seen the Disney Movie “Anastasia”, he’s like the Rasputin character.

Rasputin knew better then anyone that powerful people are stupid and can be tricked just as easily if not more so than normal folks. The whole process gets exponentally easier  when your dealing with someone who might, theoreticaly, be represented by their bosses dad as in the case of Kevin Demoff the Rams COO. Its like when Dick Cheney convinced W to invade Iraq because they tried to kill his dad 10 years ago.

Rasputin was killed by some hater after they buried him in ice and threw him into the Neva. Fisher is on the cool throne and not so coincdentally moved his entire team from the city with the deepest river in the United States to the one with the shallowest to avoid such a fate. King Stay King.

9. Is Ezekial Elliot eating soup or ceral when he does his little celebration? I think its 100% without a doubt soup. Soup is hearty. Cereal is what soup eaters eat when there not eating soup. You dont brag about finishing your lucky charms, but when a man downs a bowl of ramen- now thats a meal. Bragging about consuming a bunch of Serial makes you sound like you care more about NPR then PPR.

10. Shout out to the city of Detroit for being such gracous hosts this weekend. Heres a little tip of the hat as are way of saying thanks: