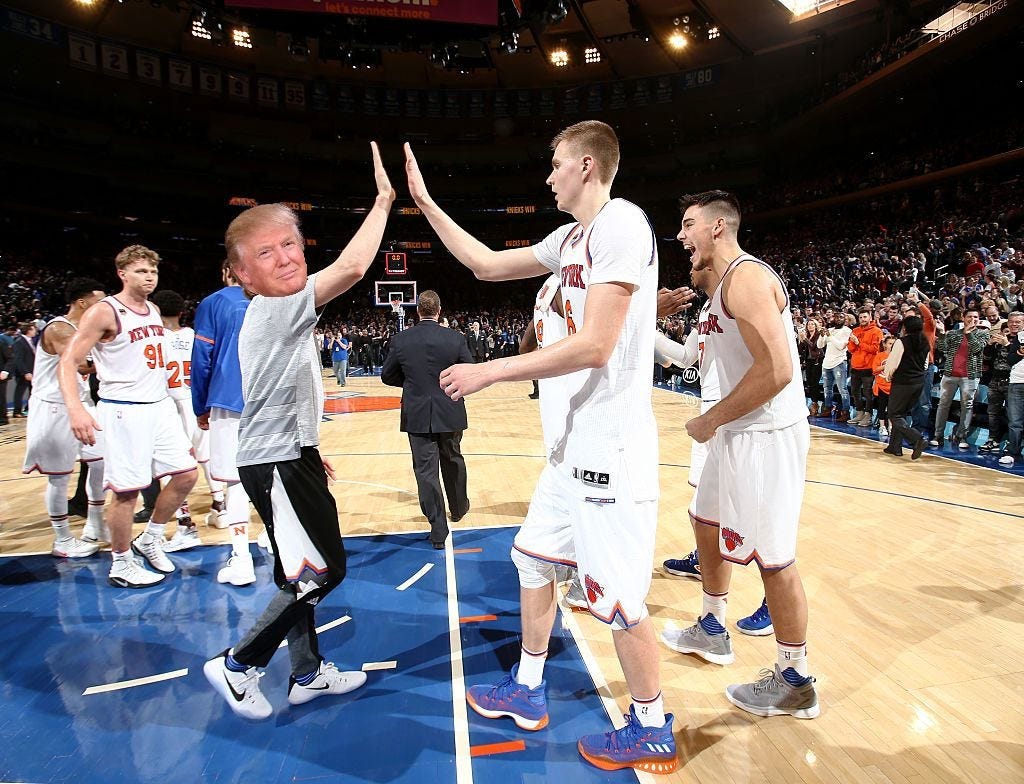 Complex- On a slightly more serious note, you’re an immigrant here and you came at an interesting time in our country’s history. Just want to get your reaction as someone who is not a born American to this past election and just the last couple of months in general.
Honestly, I didn’t follow it that much. I don’t really know the positive things and the negative things that this whole thing has but, anyway, you have to give him a chance, you know? People are saying like [the] same thing with me—they booed me at first, you know? [Laughs.] So you never know. You know, you have to give him a chance. [But] I don’t try to get involved in the political things too much, that can only cause trouble for me.

You know what? Our gigantic Latvian savior has a point here. People shouldn’t necessarily judge a book by its cover or Amazon reviews. If we did, Kristaps would indeed be the 7’3″ stiff in the ilk of Fuccboi Frederic Weis we thought he’d be instead of a human glitch that can drain threes, block shots, and have unlimited swagger. I don’t know if Knicks fans were ready to protest for weeks after Porzingis was drafted, but the city was angry that day my friends. Like an old man trying to return soup at a deli. Instead of sad sack posts by people like Lena Dunham, we had rage-filled videos like this.

And we were wrong. Dead fucking wrong. Then we found out that Porzingis loved rap and Rihanna, we gave him a chance as he balled his dick off in the Summer League, and now we have our first young, homegrown building block with a superstar’s ceiling since Patrick Aloysius Ewing. There is a chance that in the next four years Donald Trump will make America great again just like Kristaps has the Knicks on the path to being great again, while all the Trump haters look like that insufferable crying Knicks kid son of a bitch. All Trump need is a chance. I suppose we owe him that much. Who knew a 21-year-old Latvian kid could teach Americans so much about embracing their government?

P.S. In my mind, Mo met Porzingis and said “I work at Complex but used to work at Barstool” and Porzingis said “Oh I know Barstool. Clem is my boy even though I don’t follow him on Twitter. I bet he’s not as fat as everyone says he is.”

And yes, that picture will haunt me until that fateful day I meet my hero.