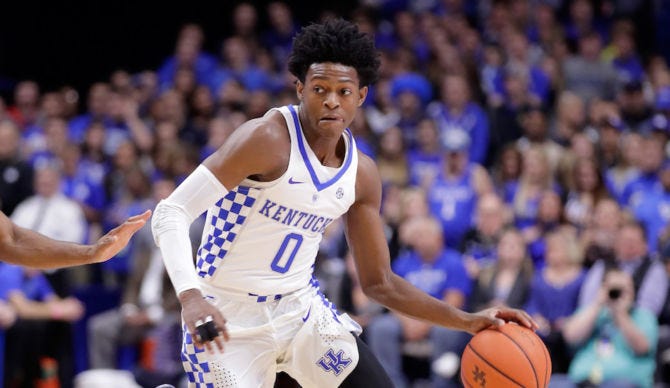 I’m here to tell you if you’re watching football today instead of college basketball you’re nothing more than a sheep. The conference championship games today are all worth shit except for the ACC. The playoff picture is set with a Virginia Tech win, while we have what looks to be the best slate of games in the regular season in college basketball.

We’ll get into it right away since there’s plenty to break down. Let me know your thoughts on the game and join me in sitting on the couch and watching these games @barstoolreags

– This is the most anticipated game so far this season mainly because neither team has any major injuries and both teams look like Final Four contenders. We have what will be one of the best 1-on-1 matchups at the point guard spot in Lonzo Ball and De’Aaron Fox. These two freshmen are going to be lottery picks next year and already look the part of two of the best point guards in the country. Fox is coming off a triple-double against Arizona State and Ball is always a threat to get one as his game has drawn comparisons to Jason Kidd. Fox is recognized as the best defender in the freshmen class, and is making a serious case for best defender from the guard spot. If he’s able to stay out of foul trouble and contain Ball, this game shouldn’t be entirely close.

– The other matchup to watch are two guys who are slightly overshadowed by their freshmen teammates. Isaac Hamilton vs Isaiah Briscoe. Both are scoring about 18 points a game and tend to be the ‘calming factor’ for each team. When they need a bucket to stop a run or get the team going, it’s usually one of these two that get the ball in their hands.

– This is a rematch from last year, which fell on this date. UCLA won when UK was No. 1 in the country. UK was also 7-0 in that game. I’m not saying it’s a conspiracy, but I’m not not saying it’s weird.

– I expect to see a lot of zone from UCLA. The Bruins aren’t a great defensive team and the key to beating Kentucky is slowing its offense down and making them shoot from the outside. You hope Malik Monk doesn’t catch fire like we’ve seen him do, but it’s the best strategy. Kentucky wants to run anytime they can and do a great job at finding the guy streaking on the sideline for a quick outlet. With three guys on the floor who can run point if needed, there’s no reason for a slow pace for Kentucky. UCLA will try to limit that by doing the same. Scoring. When the Bruins get a buck (luckily they are really good at that) it gives them a chance to get back before Kentucky can run.

– Offensively, UCLA will run a ton of high ball screens. Kentucky likes to switch everything with this group, so you can get Bam on Ball or Alford. I expect UCLA to target him instead of Gabriel when they are on the floor together to create a mismatch. However, whenever Humphries or Willis is on the floor, UCLA will 100% bring their guy up for the screen. Willis is by far the weakest link for Kentucky defensively and getting him in the high ball screen switch will lead to easy buckets.

Pick: Kentucky is going to win this game. It’s at Rupp, they have the bodies to play with UCLA and neither team has had a great challenge yet this year. However, UCLA stays within that number. This is going to be a close game and the fact Ball is where he’s at already says a lot. I like how UCLA can use the high ball screen to get Alford some clean looks or Hamilton going to the bucket.

– Can I interest you in a rock fight? Both teams are ridiculous on the defensive side of the ball. Virginia has the second best defense per KenPom while West Virginia has the 14th. The Mountaineers are coming off a game in which they forced 41 turnovers from Manhattan.

– Offensively West Virginia still struggles. They need to score off transition and turnovers, while Virginia runs an offense, it’s just slow paced. There’s a difference between the two, while you can look at numbers and see they look pretty comparable.

– Whoever wins the free throw battle will have a major advantage in this game. Both teams struggle getting to the line, Virginia averages just 14 points from the line, WVU just 18.

– West Virginia has to keep Virginia off the offensive glass. That’s where the biggest disparity is on KenPom. West Virginia gives up offensive rebounds on 33% of possessions, while Virginia grabs them on 34%.

Pick: I’ll take Virginia to win and cover. The Cavaliers are possibly the worst matchup for West Virginia, who plays a similar style. On top of that Virginia simply doesn’t turn the ball over and a lot of that is credit to London Perrantes. Virginia is coming off a game in which it struggled against Ohio State, so expect a statement today.

–  Nobody has had a better start to the season than Baylor. The Bears came into the season without a single vote in the AP poll and currently sit in the top-10. They’ve beaten the likes of Oregon, Louisville and Michigan State.

– The key to Baylor’s success? Its defense. They run that 1-1-3 zone that looks a little junky but is extremely effective. They don’t foul and they make teams run clock. The average possession for a team going against the Baylor zone is 18 seconds, which includes a game with Louisville who likes to run.

– Xavier needs a big game from the big 3. Against the zone, they’ll have to shoot well from outside, especially JP Macura. While everyone likes to talk about Bluiett and Sumner (and rightfully so) it’s Macura that’s the key for Xavier until Myles Davis comes back. He can stretch the floor – he came into college as a jump shooter – but now is extremely aggressive at getting into the paint.

– Johnathan Motley is going to destroy Xavier. He’s by far – I’ll repeat by far – the best big on the floor today and I don’t know who Xavier has that can keep up with him. He’s averaging 16 and 8 so far this season and at 6’10” will have a massive mismatch. The only guys Xavier plays that are over 6’9” are RaShid Gaston, Sean O’Mara and Tyrique Jones. Motley is going to have a big game.

– It will be interesting to see what Xavier does defensively. Last year they thrived on the 1-3-1 they ran, but this year it’s just giving up open looks for three. If they run that, Baylor has the guys – especially Manu Lecomte – who will destroy that zone.

Pick: Again, with it being at home and Xavier not at full strength, I like Baylor to win and cover here. I think Motley is too big of a mismatch for Xavier and will have a double-double. The Bears are legit and the play of Jo Lual-Acuil has been a pleasant surprise. The Bears are deep and balanced. I think they are able to slow the Xavier offense down and play the tempo that Baylor wants.

–  This is one of the best rivalries that has developed over the last couple of years. The two teams often play the first Saturday in December and the games are always wildly entertaining. No disrespect to UCLA, but these two teams have been the two best programs out West over the last decade.

– Arizona lost another guy. We know all about Allonzo Trier and Ray Smith, but now Arizona is without Parker Jackson-Cartwright, who is going to miss some time with an ankle injury. Kadeem Allen will have to slide over to the point guard spot, but this is a massive downgrade. Not to mention Gonzaga has one of the best point guards in the country, which makes that loss even more less than ideal.

– Arizona needs to run the offense through Lauri Markkanen. The Wildcats do still have a ton of talent and scoring options in Kobi Simmons, Allen and Markkanen, but the Finnish is the best of the bunch. He’s the prototypical European big guy in the sense that he can step away from the basket and is already extremely polished.

– Gonzaga needs to pressure Arizona. With no Cartwright and a limited bench (just two scholarship players for Arizona), the Bulldogs need to run and press. Make Allen uncomfortable in his first big game at point guard. Force fouls so Arizona has to go deep in the bench.

– The depth that Gonzaga has is absurd. They have five guys averaging over 10 points a game and another two over eight. They have eased Przemek Karnowski back after missing last year with injury, having him just play 19 points a game. They can attack you a variety of different ways and more importantly the shooting improvement from Nigel Williams-Goss is incredible.

Pick: It’s just too hard to take Arizona right now with everyone they are missing. Gonzaga to me is a top-7 team in the country and has all the pieces to finally get to that Final Four. The backcourt of Williams-Goss, Perkins and Matthews is one of the best in the country. Arizona will keep it close, especially because Gonzaga has been inconsistent in playing a full game so far this year. But, the lack of depth will wear the Wildcats down.

Rhode Island at Providence – URI is coming off a tough loss at Valpo. Providence has played a little better than expected so far this season. URI is just better. URI -2

Oklahoma at Wisconsin – Wisconsin finally found itself against Syracuse. There will be a little bit of a let down here, but Wisconsin will win. However, take Oklahoma +10

VCU vs Illinois – The game is in Miami, so no home court advantage. VCU will be missing Jonathan Williams today and Malcolm Hill still is really good. However, I’ll take VCU -6 today.