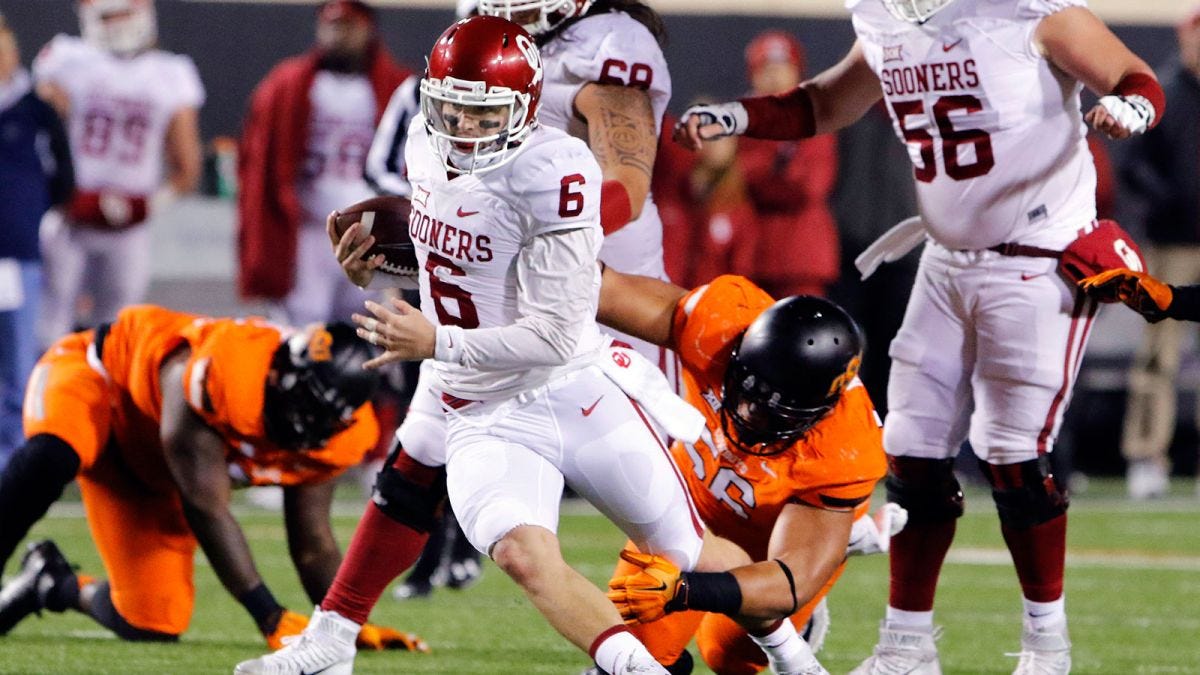 These teams don’t like each, other plain and simple. For the second straight year this game will decide the Big 12 Championship, and again a possible playoff spot for Oklahoma. Flash back to last year, where Oklahoma invaded Boone Pickens Stadium to romp the Cowboys 58-23. The win earned the Sooners a spot in the college football playoff. Oklahoma State quarterback Mason Rudolph played only one series in last year’s game due to a foot injury, but this year he returns with a bit of a chip on his shoulder.

Oklahoma kicked off this year by getting blindsided by Houston 33-23, but the score did not do justice to how one-sided it actually was. Houston took it to Oklahoma from start to finish and was the big story after week one. A few weeks later, Oklahoma was blown out by Ohio State and things looked very uneasy in Norman. Since that game Oklahoma has rattled off eight straight conference wins while being led by their dynamic trio that includes Heisman candidate Baker Mayfield, Heisman candidate DeDe Westbrook, and Joe Mixon.

Oklahoma State suffered a bad non-conference homes loss to Central Michigan in the beginning of the year. Since losing their Big 12 opener to Baylor, the Cowboys have strung together seven consecutive wins and have themselves in position for a Big 12 title with a win versus Oklahoma. Mason Rudolph has had a great season and has surely wanted a real shot at the Sooners after being a non-factor last year.

Where do I begin with this Oklahoma offensive unit. They can score as quickly and frequently as anyone in the land. Baker Mayfield followed up last year’s breakout season with one equally as special. After just missing out on an invite to New York City for the Heisman ceremony last year, Mayfield seems well-positioned to make the trip later this month. One interesting note about Mayfield is that he has ditched his old girlfriend who notoriously went to Oklahoma State. He’s moved on to a new girl, from Oklahoma this time, Morgan Mayberry. 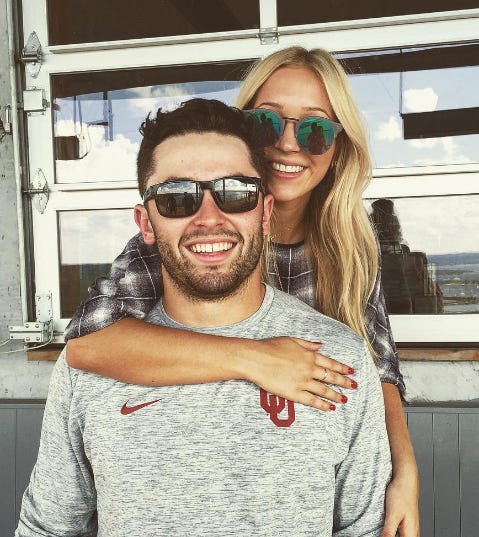 I approve. Well, there is much to this offense than just Baker Mayfield. We also have breakout superstar DeDe Westbrook. He’s had a decent year… 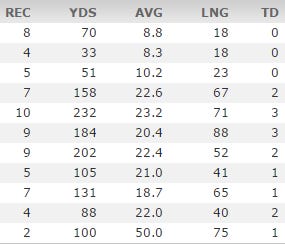 DeDe has completely burst onto the national spotlight while just torching secondary after secondary. He’s being talked about being taken in the second round of the NFL Draft this Spring, but something tells me he could slip into the first with a big-time performance in this game and whatever bowl the Sooners get into. Maybe DeDe has a trip to NYC in his future as well.

The last part of this trio is running back Joe Mixon who has averaged 6.9 (nice) yards per carry on his way to 1,084 yards and ten touchdowns. And I’m not forgetting about Samaje Perine either, who prior to this year had back to back seasons of at least 1,300 yards rushing and 15+ touchdowns. Perine has battled injuries this year, but seems to back to full strength as he has run for 100 yards and two touchdowns in each of the last two contests. Perine and Mixon in the backfield, along with Westbrook and Mayfield create probably the most dynamic offense in the entire country.

Oklahoma State can put up points themselves, don’t worry. Mason Rudolph has compiled over 3,500 yards through the air with 25 touchdowns to just 4 interceptions. Freshman running back Justice Hill has been the workhorse in the backfield all year, and is just 57 yards shy of a 1,000 yard season to go along with his five scores. The Cowboys best play-maker though is James Washington. You may recall earlier in the year when he manhandled the Pittsburgh secondary for 296 yards. If you didn’t catch that one, check this minute clip out.

These guys have fire power, but just nowhere near what Oklahoma has.

Both of these teams like to throw it downfield. In 11 games this season, OU has completed 11 passes that have gone for 50 yards or more; OSU has nine. On the flip side, they will give up the deep ball. The Sooners have allowed nine completions of 50 yards or more this year; the Cowboys have given up seven. We’re looking at rain thoroughly throughout this contest so that obviously points to the ground game. Justice Hill has had a very good season don’t get me wrong, but Mixon and a healthy Perine against a bad run defense all year spells trouble for OSU.

Stoops and Gundy are two characters that’s for sure. Gundy’s mullet is on another planet, while Stoops is a notorious ticking time bomb to drop the ball in a big game (Houston in season opener/Clemson last year). There’s no edge here.

Most of the money seems to be on Oklahoma State to keep this close, but I don’t see it that way. The weather won’t bother the Sooners too much as they just came off a snow fest in West Virginia two weeks ago where they blew out the Mountaineers. I think Mixon and Perine go completely off, let’s say they combine for 300 yards in this one. Mayfield will make plays when he needs to, but won’t have to play superman to pull this one out. The Sooners make a statement and build their slim case to the committee that they deserve a spot in the playoff.