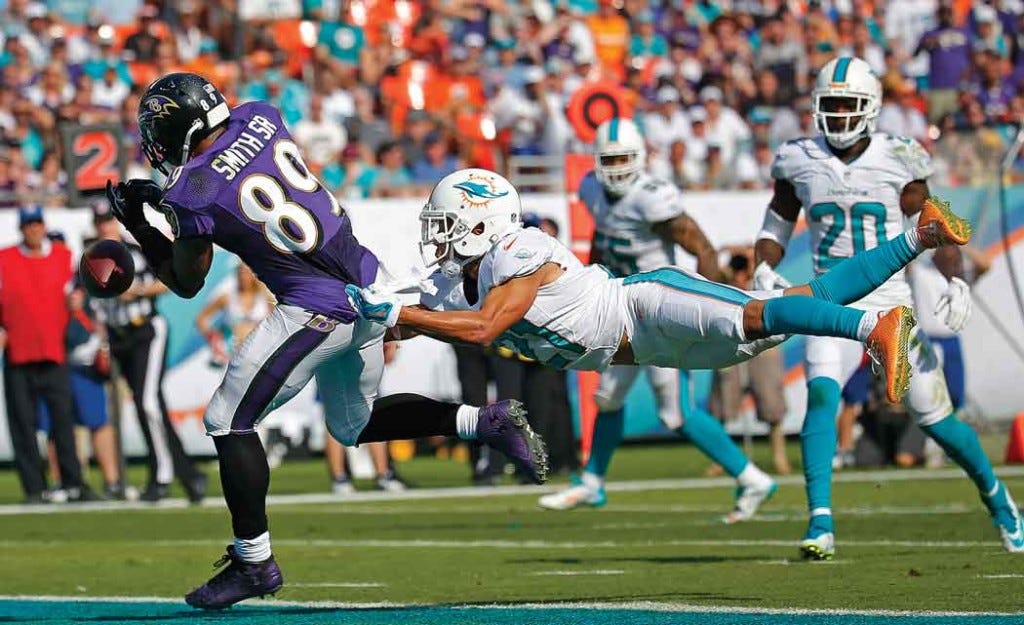 The 6-5 first place Ravens come into Sunday’s game against the Dolphins with a more difficult task than what we imagined in Week 1. This was supposed to be the breather in the back half of the schedule. This was the game where we were supposed to catch our breath after tough games against Dallas and Cincinnati and before a big MNF showdown with the Patriots. And that certainly looked to be the case after the Dolphins pissed all over themselves in September.

Things have changed. The Dolphins are red hot. They’ve figured it out by running the football and hoping to get defensive stops. That’s put them on a 6 game winning streak, and have earned the right to be confident going into Sunday. But let’s also call a spade a spade. Their 7 wins come against opponents with a combined record of 25-53. Their last 5 wins have all come by one possession, and come against opponents with a combined record of 19-35. That’s not to say that the Ravens have won games against great teams or in impressive fashion, I’m just saying that I’m not afraid of the Dolphins by any means. They’ve gotta come into Baltimore and beat us in our domain. That’s no easy task.

(Note: Did some research to confirm a thought and it turned out to be true. This game seems to ALWAYS be played in Miami. 10 out of 13 games in their series history were played in Miami. I’m not complaining because everyone knows a Miami crowd is soft serve and the game is here this year, but it’s just interesting.)

Anyway, the Dolphins are kinda like the Cowboys in that their offense is very dependent on the ground game. Even though the Cowboys still found a way to beat us by winning third down, I’m still confident that this bodes well for the Ravens. Great rushing defenses generally beat great rushing offenses. I stand by that. “Great” is kinda an understatement to describe the Ravens Rush D. As of right now, they have the best rushing defense DVOA in the history of DVOA. Yes, even better than the 2000 Ravens. And let’s also not forget that the Dolphins aren’t as strong up front as the Cowboys and don’t have that Zeke guy. No disrespect to Ajayi, but he’s a flash in the pan. The Ravens WILL win the battle in the trenches.

On the other side of the coin, the Dolphins are a mediocre defense. They’re 20th in YPG and 16th in PPG. Very average. Their weakness is defending the run, which is a great sign for the Ravens IF they can stick to running the damn ball. There’s a lot of talk about how the Ravens seem to find a rhythm in the no-huddle offense, but that doesn’t mean that they have to throw. My fear is that they’ll do it anyway. It seems like every time they don’t pick up a big gain on consecutive carries, they abandon the run completely. It’s beyond frustrating. Sunday is another opportunity for the run game to build some confidence, and hopefully they take full advantage. Lord knows they’re running out of time to figure out who the hell they are on offense.

Regardless, I expect a solid Ravens win on Sunday. The Dolphins just aren’t as good as their record says. Period. I think we’ll see some ugly football by both teams, but the Ravens will prevail. Maybe I’m saying that because they really can’t afford not to with the remaining schedule, but it is what it is. I can feel it in my plums that the Ravens play one of their better games on Sunday.