Now that know that baseball will be played this season thanks to the new CBA, we can focus on this upcoming season. I know a lot of teams were holding off on signing anyone until they knew if the CBA would be approved or not, the Orioles were not one of those teams. It seems like Dan Duquette takes his hibernation from Thanksgiving to around Feb 1st, so like any normal bear does. The O’s are NEVER the team to go out and break the bank in November or December, these teams have all had their pieces brought to them in January, February, or even March. Speaking of February, it was announced yesterday that pitchers and catchers will report on February 13th, looks like my girlfriends birthday dinner will be spent with my face in my phone starring at pictures of Manny Machado and Adam Jones ( I do this ever night). The Orioles have some holes to fill, including the outfield spots. Let’s look at some of the names that have been floated out there as options for Baltimore.

This is a hole that the O’s have looked to fill for a while. They can’t seem to find that prototypical corner outfielder who has speed, can get on base, and steal some bases. Hyun-Soo Kim will likely platoon with someone, but they are still looking for an everyday lead-off, corner outfielder. Who are some of the guys that could fill that hole? Is a former MVP the answer for the Birds? (no) 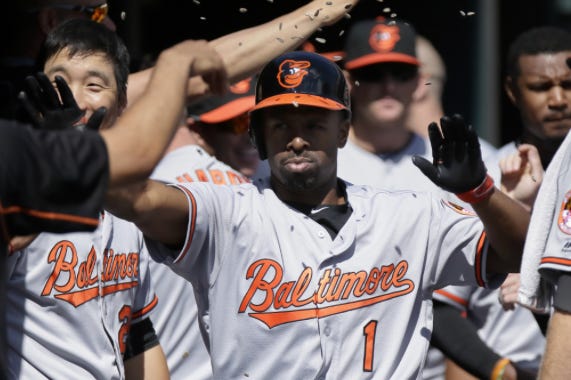 Michael Bourn- I loved what I saw from Bourn last year in his short stint with the Birds last season. He was a nice little spark plug for Baltimore, exactly what they needed. A guy who could get on base (.358 OBP), used his speed on the base paths, not just with his steals, but being a threat to steal got in opposing teams heads. Take away the brainfart he had in the Wild Card game, and he played pretty well in the field for Baltimore. He is a perfect top of the lineup guy, although I would like to see him take more walks, not much power, but he can get ahold of one. I think Buck would love a guy like Bourn at the top of his lineup for 150 games, would give him a speedy guy that can distract pitchers while the big guys are up at bat. He doesn’t have to play everyday, and can be a weapon off the bench too, I think he fits in well with the guys in the clubhouse as well.

Angel Pagan- This is an intriguing name that has been floated recently. Buck Showalter was on the 105.7 The Fan “Orioles Hot Stove” show last night and had some good things to say about Pagan. I expect the Orioles to do their due diligence and check in on Pagan, but I don’t think he ends up here. Much like Bourn, I would love Pagan at the top of the lineup. He has very low strikeout numbers, but also doesn’t walk that much. A table setter who has stolen 43 bases over the last three seasons, that is more than plenty for this ball club.The age is one drawback, he’ll turn 36 during the season, so a deal for him shouldn’t be more than a year. If the O’s do decide to take a run on him, I wouldn’t mind seeing a one year deal worth $8-$10 million. His numbers last year weren’t terrible for a guy his age, .277/12/55, but my guess is Angel will not be wearing an Oriole bird on his hat next season.  This isn’t really an Orioles move, if they are going to upgrade, it likely will be from in-house, and won’t be a guy this age.

Mets Sluggers- The O’s have recently been linked to two of the Mets’ outfielders, Jay Bruce and Curtis Granderson. Granderson is an intriguing name to me, could also come cheap in a trade. I’m not sure if it is a salary dump because of them re-signing Yoenis Cespedes, but it does seem like the Mets are looking at moving the Grandy Man (if this happens, lets print the shirts, Nate). I think he would fit in great in this clubhouse, a lefty who can play either corner outfield spots, and he has always raked at Camden Yards (278/18/43, .346 OBP). He turns 36 before the season, so much like Pagan, the age scares you. He had such a strange season last year, .237/30/59. Yes, 30 homers and he didn’t even knock in 60. I’m not sure if that says more about the Mets not getting on base in front of him, or if he just loves hitting solo dongs, 24 of the 30 were solo shots, including 18 in a row, that is insane.  He did hit leadoff in 82 games, so he likely never had anyone on base in front of him. He’s due $15 million in the last year of his four-year deal, strikes out a dickton. But if the Mets are looking for bullpen help, that is what the O’s have plenty of. I’m not sure I’d give up a Brad Brach for him, but I’m sure the O’s would listen to a deal if the Mets decided to pay some of his salary. I think he would be more of an upgrade than the next fella though. 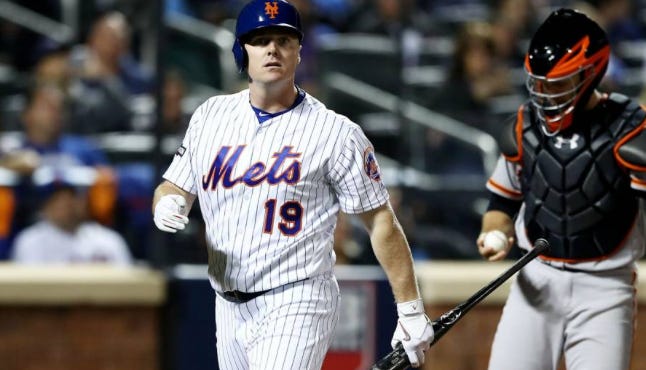 The other Mets outfielder being talked about is Jay Bruce. I can’t say no enough to this guy. He was the hot guy that everyone wanted at the trade deadline, and he pissed down his leg when he got to New York. Bruce hit 33 bombs last season, but only eight in 50 games after the trade. A .219 batting average went along with the poor power numbers, and he’s not very good with the leather. Doesn’t seem like a natural fit with the team, and also doesn’t seem like a “Buck guy”. Couple the poor performance in New York with his $13 million he is due to make this season, and you got me wishing I had four hands, so I could give Jay Bruce four thumbs down. The Orioles don’t need another 30 homer/160 strikeout guy, they have plenty of those. They need a high OBP guy who will swipe some bags and play some solid defense, Bruce ain’t that. Hey Clem, tell the Wilpons to not even THINK about calling the O’s about this poor excuse for a baseball player.

This brings us back to the square 1. While these names being floated seem good on paper maybe, you look closer and they are too old, making too much money, or just don’t fit with the team. As of right now it looks like Joey Ricakrd will be that leadoff, corner outfielder, which doesn’t sit well with me. I don’t think he has the tools to be a successful leadoff hitter. We saw him excel last year in that role, but no one knew who he was, and the had no tape on him. Once people got familiar with him, he dropped off. I think they are better off with Adam Jones over Rickard at leadoff, I just prefer Rickard on the bench. I guess my wish for a leadoff guy out of those I mentioned would be Michael Bourn, likely cheaper than any other FAs out there, Buck is sort of familiar with him, and he performed well when called upon last year.

That’s all for right now, I’ll be back later to discuss more of the Orioles offseason, if they have their Opening Day catcher on the roster right now, and who gets left out of this pitching rotation. In the meanwhile, you can listen to me on 105.7 The Fan today around 12:20. I’m joining Jerry Coleman, and former Redskins General Manager, Vinny Cerrato to discuss what I wrote above, plus more Orioles talk. Tune in, you know you want to (If it is just ads when you click the link, refresh. People in Baltimore have bills to pay).

Follow me on twitter, @BarstoolRDT, maybe I’ll venmo you some cash, maybe you’ll be making the best decision of your life. Only time will tell.