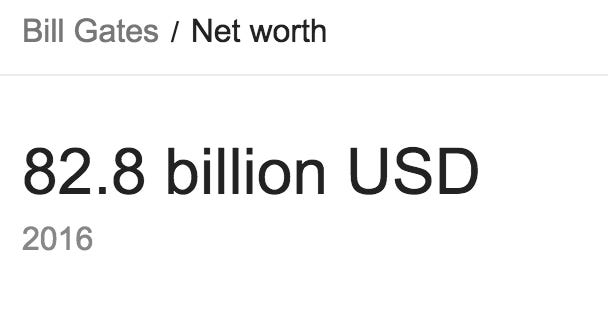 and does not give a fuckkkkkkk about chess.

Do you ever sit back and think about how much money 82.8 BILLION dollars is? It’s crazy money. I’m not even sure that amount of money literally exists in the natural world. I get a pay check every 2 weeks (knock on wood) and I feel like a new person. I stare at my bank account for hours on end, like fuck yes, look, I have dollars in it. Enough of you lovely people bought a Dwight Schrute Xmas sweater and I got a 5k bonus and I’m walking on sunshine. Started thinking about buying a beach house n shit. But in reality, I’m still broke as shit. Bill Gates wouldn’t stop walking down the sidewalk to pick up my bank account if it was sitting outside of his house. He’s just so fucking rich, it doesn’t even make sense. There’s not 1 thing on this entire planet, literally on this entire planet, that he cannot have. It’s hard to even think about. Want to buy a rare endangered albino elephant? He can. I don’t get why he hasn’t bought entire countries at this point and named them after himself. There’s fuck you money, and then there’s Bill Gates money.

My other point about Bill Gates is he definitely is part of some sort of New World Order. You don’t get that sort of wealth and not secretly run the world. It just doesn’t make sense. Once people like Gates, Zuckerberg, etc get to that sort of wealth, they 100% for sure join the Illuminati or Free Masons or whatever it was that Charles Widmore from LOST was a part of. They pull the strings, they dictate who lives and who dies. And most of all, they know all the secrets. Because obviously all these kabillionaires have the money to save the planet, feed the Starvin Marvins of Africa, etc. But there is a reason they aren’t allowed to, which they talk about in their secret rich people meetings. I might have just said too much, but it’s insane if you don’t believe in this. Get woke, stay woke, woke.