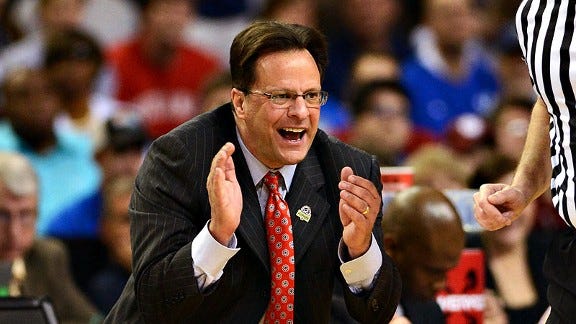 The next two days in the college basketball world are relatively slow before we see a monster slate of games on Saturday. So with that and our guy Jerry back at the Stool, I decided to steal (paying homage to the Patriots, am I right?) his reactions style blog. There was obviously plenty that happened this past week, so we’ll get right into it.

–  First I want to talk about Tom Crean. Charlie brought this up last night after the win that Crean doesn’t get the credit he deserves for what he’s done at Indiana. That’s partially true. There are two different chapters you have to look at when you look at Crean’s tenure at Indiana. When he took the program over it was obviously a disaster thanks to Kelvin Sampson and there was a rebuilding period. Everyone expected that to be about 3 years long mostly because it’s still Indiana, the talent in-state is absurd and that should be a fairly easy program to turn back around. He did the rebuilding process as well as almost anyone could. After winning just six games in his first year, he jumped to 27 in his 4th and made a Sweet 16. That’s where you can start criticizing Crean though. After the rebuilding process was over, Indiana has been expected to compete for Final Fours. They haven’t made it past the Sweet 16 and that includes a year where he was the No. 1 seed. He got in his own way against Syracuse that year as the No. 1 seed by trying to get cute in attacking the zone, which cost them the game. He then went two years without winning a NCAA Tournament game. Crean needs to have a good March and needs it soon. Two of his three signature wins have come at home in the regular season. He needs to start having more of those in the second weekend of March. So while it’s fair to say there’s been a little bit of a let down for Crean, you have to praise him for what he did to get Indiana to that point.

– Speaking of Indiana in March, this is a team that can absolutely get to the Final Four. Or lose to a No. 13 seed. Last night Dick Vitale asked ‘what is the real Indiana team? The one that lost to Ft. Wayne or the one that beat Kansas?’ Well, the answer is both. The way they shoot the ball, the lack of a point guard and how they can get stagnant on offense leads to a roller coaster of a season. But, their ceiling is just about as good as anyone in the country. Have fun watching them all year.

– UNC had to get the ball to Joel Berry down the stretch. After he made that runner to cut the lead to four, he never got a shot off again until late in the game. He’s the best player Carolina has and they needed to find a way to get him a look. Shit, he’s shooting 48% from three this year.

– Roy Williams was critical of the UNC crowd last night in his press conference. If you didn’t see it, he essentially called out the UNC crowd for sucking except for the Duke game. It’s true. The Dean Dome is wildly overrated and the wine and cheese crowd is brutal. I was there for a UK-UNC game when UNC was No. 1 in the country and you would have thought they had no idea the season started. The Dean Dome is the most overrated home court in America with Rupp Arena a close second – they have too many blue heads in the lower level and not enough students.

– Assembly Hall showed it’s one of the toughest places to play. Someone asked the best home courts in America – it starts and ends with Phog Allen at Kansas. Other places that come to mind are Assembly Hall (IU), Cameron (Duke), The Pete (Pitt), Rupp (just so many people), Century Link (Creighton), The Pavilion (Villanova).

– Louisville needs to find some offense and needs to find it quick. Yeah, its calling card is the defense and scoring off of turnovers. But, this team needs Donovan Mitchell to become more of a dominant scorer.

– Louisville needs to remember the game is more than just one half. After blowing a 22-point lead over the weekend to Baylor, the Cardinals almost blew another massive second half lead to Purdue. The hell is Rick Pitino doing in the locker room at halftime?

– Purdue is still Purdue. This just isn’t a team that can compete for a national title. They will likely be a No. 5 seed again this year and most people will pick the No. 12 seed over them. They just panic against pressure and the guard play isn’t strong enough to help out when Swanigan struggles.

– Wisconsin found its offense. The best thing they did was see the 2-3 zone and immediately put Nigel Hayes at the top. Having him be the 3rd scoring option is what will win this team games.

– Ethan Happ is the best player on Wisconsin. He absolutely dominated that Cuse game and is one of the best rebounders in the game.

– The questions I had about Syracuse are still there and glaringly obvious. The first being a lack of a true point guard and the inability to get rebounds. What happened to them being ‘so tall,’ Cuse fans?

– It’s obvious but Duke is going to be scary good when the three freshmen join the team. The real question is who loses minutes? The first guy to will be Chase Jeter. After that? It’s a toss up, but I think you see Frank Jackson lose some because of how good Luke Kennard has become. K won’t bench Jefferson or Jones, so I think you see the rotation being Jones-Allen-Tatum-Giles-Jefferson as your starting five with Bolden-Kennard-Jackson as your top 3 off the bench.

– Michigan State needs to find a scoring option. Miles Bridges can’t carry this team and opponents have the game plan to just let him try to be the guy and it’s clearly working. Paging you Eron Harris and your 17.5 ppg at West Virginia.

– Lonzo Ball is must-watch TV and you better watch that UCLA/UK game on Saturday. We’ll see two of the best point guards in the country in Ball vs Fox and both are triple-double threats anytime they are on the court. Ball has been compared to Jason Kidd and while he shoots like Kevin Martin, his passing is unreal.

– Get to know St. Mary’s and its star Jock Landale. They currently sit No. 9 in KenPom and No. 12 in polls with wins at Dayton and Stanford. Landale is going to make an All-American team as long as he doesn’t get injured. He’s currently averaging 19.7 ppg and 9.0 rpg.

– The Mountain West had its most important day in over two years yesterday when Boise State beat SMU and Colorado State beat Colorado. Those are two big time wins for a conference that had lost some of its luster.

– Tonight the only game to watch is Cincinnati at Iowa State at 9pm. Tune in for the Monte Morris show. He’s making a case for best point guard in America and NPOY.