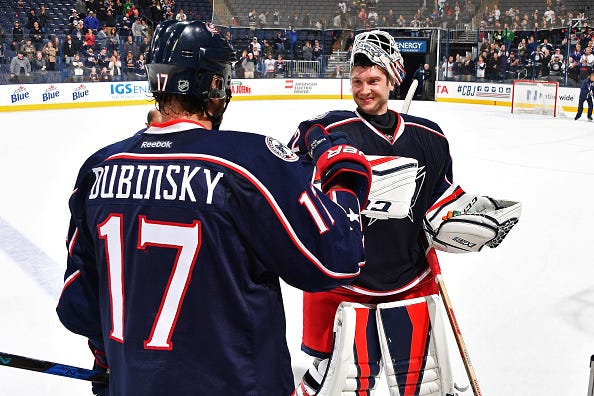 Hey. You guys remember when the entire hockey world wanted John Tortorella’s head on a stake? Remember when everybody said he’s a buffoon who can’t coach talent? A neanderthal who places more importance on grit and shot blocking than he does on scoring. Well I hope you all brought your own paper towels because there’s egg all over your face. A little over a quarter of the way through the 2016-17 NHL season and the Columbus Blue Jackets are one of the hottest teams in the league. 9-2-3 in the month of November and they’ve scored 5 or more goals in four of those wins. John Tortorella went from coaching one of the most disappointing teams in hockey history with Team USA in the World Cup, to leading one of the most surprising teams in the NHL this year. Live look at all the haters right now.

It really all started back on Friday November the Fourth, Two-Thousand-Sixteen. You may remember that as the night that the Blue Jackets popped a 10 spot on the Montreal Canadiens. Sure, it was a home game and the Canadiens had Al Montoya in net. It was a perfect storm for the Blue Jackets to gain some momentum against one of the best teams in the league. But 10-0? That’s a statement no matter who you’re playing. And it’s not like 1 guys is carrying the load for the Blue Jackets.

They don’t have a Connor McDavid who has the ability to completely take over games. But they’re getting help from everybody. There’s 8 different players on the roster who have double digit points so far this year. Zach Werenski, who was playing at Michigan last year, is 6th among all defenseman in scoring with 16 points. Sam Gagner, who scored 8 goals all last season in Philly, has 8 on the year so far in just 20 games. They’re getting what they need out of Cam Atkinson and Nick Foligno and Brandon Saad so far. This is looking like the team that a lot of people expected the Blue Jackets to be before the start of last season but then all hell broke lose. They fired their coach, they traded Johansen, it was a complete meltdown. But 21 games into this season and things are looking pretty good in Columbus.

Now the question is whether this was just a fluky month of November or are the Blue Jackets for real. Mainly that’ll come down to Sergei Bobrovsky (goddammit I hate the Flyers so much). Only Carey Price has more wins (13) so far this season than Bobrovsky’s 12, but Price has also played 3 fewer games. He doesn’t have a save% or GAA that screams “Vezina” but he’s won the hardware before and he’s done it with a worse team. Are the Blue Jackets a legitimate Stanley Cup contender? Hell no. But are they a team that can fuck over the Flyers and hold on to that Wild Card spot in April, especially if guys like Seth Jones and Brandon Dubinsky step up a little more? For sure. The Columbus Blue Jackets are a playoff team and considering they still have guys like Sonny Milano and Pierre Luc-Dubois waiting in the pipeline, they’ll only get better. So yeah, I’d start paying attention to Columbus if you haven’t already.

FULL DISCLOSURE. – the main reason I’m writing this is because all of my “takes” usually end up being bad. So the same way I said the Penguins were dead last season then they ended up winning the Cup, I’d really enjoy for this blog to have the adverse effect on Columbus.