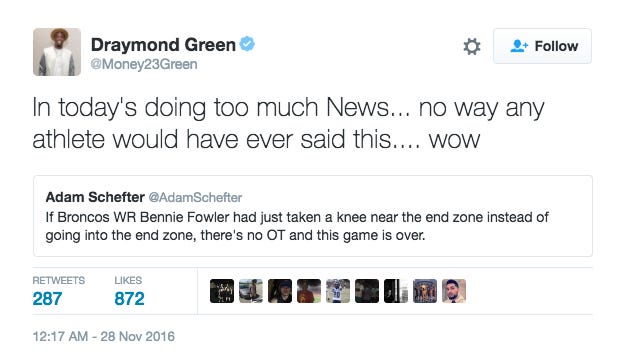 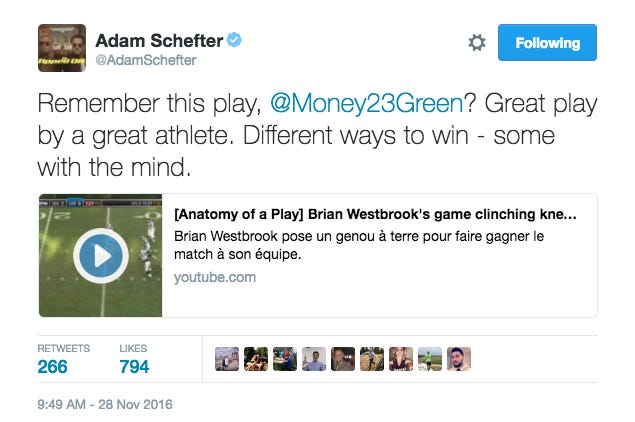 Real excited to see how this one ends up. In one corner we have the Bay Area Ball Breaker. The Crusher of Dreams And Record-Breaking Seasons. Owner of 10 strong Twitter fingers and a peg leg Snapchat dick. Draymond motherfucking Green.

In the other corner, we have the Little Bad Boy of Bristol. A man that will break you in half in 140 characters or less and then tweet out your medical records to prove it. Adam Schefter.

At first blush, I would have said Draymond had the clear advantage. He is taller, stronger, and more athletic than Schefter. Draymond has the high ground in the beef since he struck first (always important in a Twitter beef) and he already used his trump card by mentioning Schefter isn’t an athlete. NOTHING pisses off reporters more than being told they had to play the sport in order to know about it.

However, Draymond made two fatal flaws. According to Wikipedia, Draymond only participated in football practice at Michigan State a couple times.

And he STUNK at football.

Meanwhile all Adam Schefter has is some of the best workout film known to man.

And once intercepted Tom Brady. Ever heard of him?

Draymond’s second mistake was calling out John Clayton. Winning a two-front Twitter war is damn near impossible. But when the second front you just called out has the look of a guy that would drive through three states while wearing your head as a hat, you should either get an apology tweet cued up or say goodbye to your loved ones before hitting the mattresses.

So through 3 rounds, I’m giving Draymond a slight 29-28 edge. But between picking a fight with Mad Dog Clayton and fighting in Schefter’s home turf of Twitter, I fully expect Draymond to tap out before the Barstool Cyber Monday telethon begins. You don’t bring a fight to a guy like this and live to tell the story.