Ah nothing like cracking open a video of some impossibly shredded dude when you’re at your fattest and most pale after God knows how many hearty Thanksgiving meals. But if anything I feel like this was mostly an ego boost seeing this dude who undoubtedly works out more in a week than we all have in the last few months completely whiff with a bunch of chicks. Overall the idea here seems pretty not-2016 of him, he was honestly lucky some chick didn’t sprint away muttering something about assault and safe spaces and being triggered in one run-on sentence. But I’ll take four minutes of girls wildly indifferent to this dude’s immense physical gifts just as gleefully.

This dude is like Zac Efron with a just a dash of some Incredible Hulk gamma rays and these girls completely no-sold it because it’s just not how girls think. Maybe 90s chicks in a Diet Coke commercial would go crazy over some construction-strong minimum wage worker’s “buns” but now chicks need more than that. They need a little personality, perhaps some high quality blogs under your belt, but they really need you to have something more going than just some Jersey Shore-caliber muscles and sputtering out some bullshit about how you’re a YouTube fitness model. Get them in a frat with a Jungle Juice or two under their belt, maybe the story changes, maybe they’re not questioning why this strange man who doesn’t attend their school is desperately taking his shirt off on campus. But I’m choosing to focus on the positives here: Everyone who ate an unconscionable amount of carbohydrates over the last few days won this round, guys. Take your physical superiority and visible hard work elsewhere bucko.

PS would, would, would and a maybe for real-life Velma from Scooby Doo in the background: 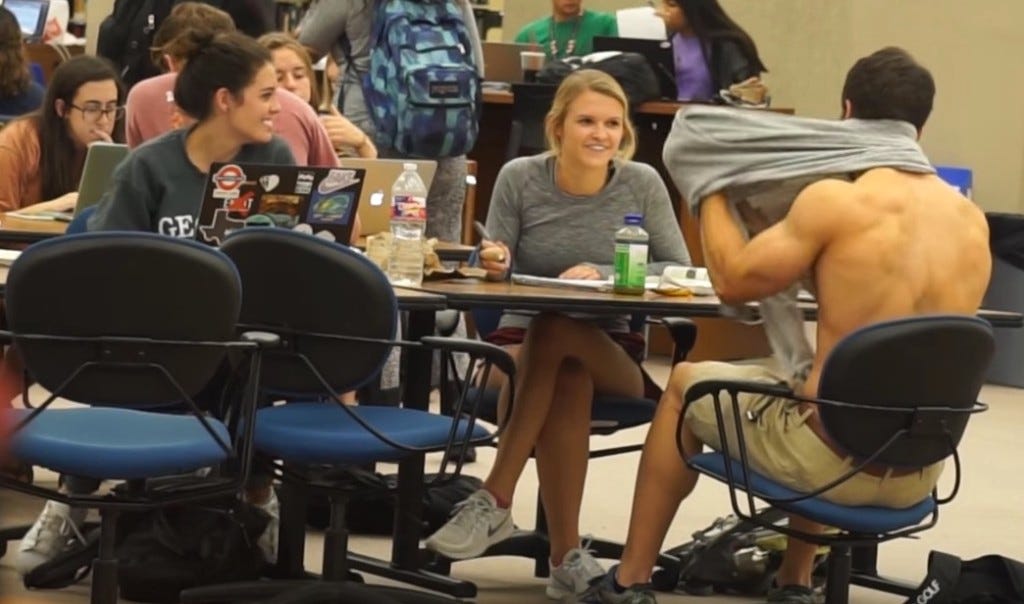