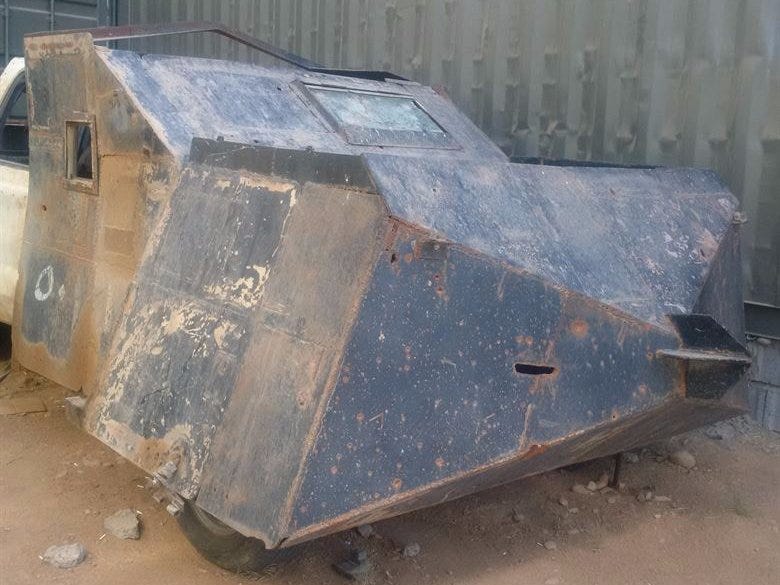 Col. John Dorrian, spokesperson for Operation Inherent Resolve, showed off a photo of one of the vehicles the terrorist group has been using in Mosul for vehicle-borne improvised explosive devices, or VBIEDs.

“It’s reminiscent of a Mad Max vehicle, with armored plating in the front to protect the driver until he can detonate the explosives he’s carrying on board,” Dorrian said in a Pentagon briefing on Wednesday, according to The Washington Examiner.

Not a chance that these ISIS fighters didn’t get this MadMax suicide car idea from watching bootleg movies that they picked up when they were getting a carton of cigarettes for 7 dollars. Copycat written all over it.

It’s gotta be a pain in the ass to drive one of those bad boys, though. Imagine trying to drive your suicide vehicle into a crowd of people or buildings and you can barely see anything. It’s probably like waiting for the frost to leave your window in the winter time. You know you have places to go/ people to blow up but that damn little window is making it impossible to see around the corners. Frustrating as hell.

The article goes on to mention that coalition forces are dropping bombs on these vehicles at a staggering rate. I’d be beyond frustrated if I was welding my dick off trying to get these terror machines into operational mode and then a 500lb bomb gets dropped on my candy ass outta nowhere. Disheartening as fuck. Easily one of the biggest drawbacks to being a member of ISIS. Easily.