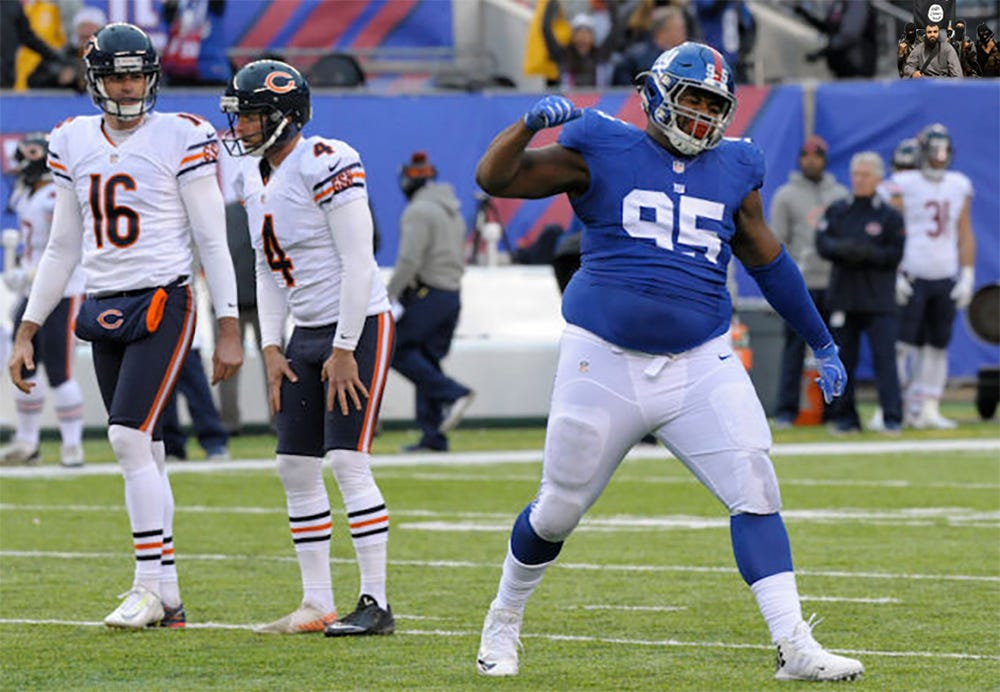 Its a sad day in America.

Our least important football players’ continued incompetence is coming at a time when the NFL- and by extension, our armed forces can least afford it. You want to talk about a catch 22? The most stressfull position in football is kicker, but for some reason we put the people who are least equipped to handle pressure (kickers) at that position. You dont put a dog in charge of vaccuuming the White House, and you dont use a rainbow trout to determine air qualty of a clean coal mine. So whose bright idea was it to make the wimpiest, most emotionally fragile players in charge of executing in the most high-pressure situations possble? Logic dictates that kickers should be selected from the military or at the very least, people who didnt self-select to become kickers. Theres a reason that snipers are the best snipers, and fat people make the best cooks.

Theres no accounabilty anymore in this world and the fact that NFL kickers missed more basic points then your standard comment section just reenforces this. I went to go Hacksaw Ridge this weekend, since enough time has finally past where its ok to go see Mel Gibson movies again and it gave me some great insight into special teams woes. The film was about the invasion of Okinawa and how some medic claimed conscious objector status because he was super religious which makes no sense at all. If God didnt want you to kill during a war then how come he gave you fingers to pull triggers and brains that are capable of cognitive dissonance? Anyways the Japanese fighters reminded me of the ideal NFL player since they would of run through a brick wall for there leader, because defeat was so dishonorable that it was actually prefrable to die. If kickers had to answer to themselves like the Japanese soldiers that stabbed there own stomachs I think they would be a little more motivated to make easy kicks. Instead there flopping all around trying to draw a flag instead of raising one like the troops at Iwo Jima. The fact that kickers have chosen November- the NFLs salute to service month- to become wildly inept is a disgrace not only to our members of the miltary but also to the Japanese soldiers that will always go down in history as the Buffalo Bills of global conflicts.

So whats actually happening? One theory is that the Kickers HAVE to be colluding. As we indicated on Pardon My Take, the NFL could have a hand in this. Take a look at there currently ongoing charity initiative:

Follow the money. Yetserday the NFL saved $12,000 out of its own pocket. Not exactly chump change for Goodell, who as recently as 2010 was making only $1 a year in salary. A 12,000,000% increase in take-home pay would be enough to make even the most honest man think twice.

Are they protesting the treatment of Blair Walsh? Yeah probably. They tend to have more loyalty to each other then to there teams anyways. Thats what you get with unions.

Some suggested that the gravitational pull from the Supermoon could be causing kickers to miss at unprecented rates, its a poor craftsman that blames his tools. So if this is indeed the issue and I’m a head coach I’m looking to harness the powers of nature. Cities with extremeley heavy fanbases like Carolina, Houston, and Indianapolis could jerry rig the stands by putting all there fattest fans on one side of the stadium so the ball is slightly more attracted to that side via gravity, and then not tell the opposing kicker. Granted you’d need to account for which sideline Andy Reid is on but thats why you have a analytics department.

Or it could be that whats happening is something thats commonly known as a mass hysteria event. A example of mass hysteria would be the popular Phoenix song “Lisztomania” where everyone in like 1560s France decided to make Liszt figurines out of there own French pubes or whatever just because there neighbor did it. And not to be morbid but there are also economic studies that show that when news artcles about famous peoples suicides are all over the papers and TV shows, the suicide rate jumps nationally due to people thinking its a ok thing to do and ever since Blair Walsh missed his 27 yd kick, its almost like kickers from coast to coast are subliminally thinking that missing easy kicks is a ok thing to do.

Alternativeley, a easy fix might just be time to bring back the toe-poke. The soccer-style approach hasnt worked for the USMNT (which is a entire sport filled with kickers) so why would we ever expect it to work on a gridiron. A American problem demands a American solution, so we just get Mike Pence to pass a law mandating the application of electoshocks to kickers whenever they fail to convert- as a nation we need to get back to a straight approach folks.

Thats what we call Kyle Williams now. He dosen’t have a name anymore:

1. Time to take this guys man-card:

The answer is no. Never*

*Here are the updated occasions where its acceptable to cry:

-When your team selects the wrong person in the draft

2. Thoughts and Prayers to Bruce Arians:

Im not one to question Arians but theres a reason your called a HEAD coach not a CHEST coach. It happens to everyone that allows themselves to let anyone love them- they get soft. Arians has grown to close with this team and has emotionally handicapped himself by caring about his players. I guess his aorta is threatening to do the mannequin challenge but the old Bruce I know would tell you thats no reason to skip film room Mondays. Arians needs to get back to his old emotionless self and cut a player for parking in his spot, or hire qualty control interns to shoot airsoft pellets at players who spend to much time stretching before practice.

3. Confirmed sex-haver Russell Wilson caught a TD to go along with all the STDs he caught this offseason. Must be nice for the kid to wake up feeling a little sore in his body as oppose to his lip.

4. Carson Wentz could learn alot from Dake Prescott about how to throw accurately when your target is  a bunch of trash.

5. For all those who thought Joe Flacco got to comfortbale after his big contract you have some more ammunition. The questionably elite signal caller admitted last week that after he got his huge payday he went out and bought $10,000 worth of vibrating massage chairs that didnt even fit him. I would of expected this type of behavior out of Trevor Sybian but not from Joe, who has literally put himself on the hot seat this season.

Speaking of electric chairs, Ray Lewis says that Flacco lacks passion and probably wouldnt even kill one let alone two people if they got into a fight with him. If Ray Lewis is telling you that you need to become angrier and more impulsiveley violent then its time you listen to him.

6. Aaron Rogers hasnt spoken with his family in several years according to a story in Bleacher Report. The author apparently spoke with several family members and as if that wasnt enough, Rogers got punked by even more Cousins on Sunday night. I call him Captain Kirk because hes in charge of a doomed enterprise and only nerds like him, and last night he allowed himself to be overcome with emotion and technically assaulted Redskins GM Scot McCloughan.

Cousins says the moment was “purely organic” which is ironic because McCloughan has a history of being more of a ethanol based lifeform then a carbon based one. Irregardless of how it developed, Kirk should never of laid hands on his boss. This is what happens when you cultivate a league thats mroe concern with concussions then repercussions Sports is  the only industry that I can think of off the top of my head without doing any research where peoples bosses earn like 10x less then they do and its becoming problematic. McCloughan should bench Cousins for his actions and see what he’s got in Colt McCoy.Kirk thinks that just because hes a star he can grab his boss by the short and curlies well thats not how America works Kirk.

7. Every good NFL backfield needs a nickname. Between LeSean “Simpex A” McCoy and speedy Reggie Bush I would like to offically decree the Bills backfield to be henceforth referred to as “Bump and Run.”

8. I am sick of all the effort shaming that is going on regarding Kyler Fackrell (which is almost a racist name given how absurly white it is) and his 50 yd sprint to get onto the field and summarily manhandled:

#51 makes it on the field JUST in time to have absolutely no outcome on the play and be thrown to the ground like a rag doll pic.twitter.com/wifAPIqiuk

Especially given the fact that we dont have the all 22 here so we dont know if it was his assignment to get thrown to the ground like a out of position cigarette butt, but this is a Dom Capers defense so I’m ruling anything out

9. Tony Romo is the best backup QB in the NFL with a record of 9-1 this year, even better record than Tom Brady. People forget that the backup is the one repsonsible for getting the starting defense ready to play on Sundays by doing Scout Team work all week and you literally could not ask for a better QB to prepare your defense to catch interceptions than ol Romolicious. Having Romo and Mark Sanchez out there during the workweek throwing unintentonal INTs is basically like batting practice for this Cowboys defense, and they are truly seeing a benefit from all of those extra reps.

What we’ve all learned from this ordeal is that Tony Romo actually might have the clutch gene but he’s a carrier of it like the monkey from Outbreak, even though he shows no outward symptoms of it. By the way I choose to live my life in the alternate realty where the Outbreak monkey carried the Mutabo virus onto the set of Friends when he took on the role of Marcel and killed Ross, Chandler, Rachel, Monica, Phoebe, and Joey with a violent hemmoragic fever. Its a wonderful reality and I welcome everyone to join me in the world where Donald Sutherland drops a vaccuum bomb with pinpoint accuracy through Central Perks exhaust chute in the year 1997.

At the very least, the Cowboys should give Romo his old duties as backup back and that includes as the holder for extra points and short potential game-winning field goals in the playoffs.

When the alternatives are having conversations with your relatives its pretty easy to see why no ones complaned. Also important to remember that its literally been the Lions playing on Turkey day for the last 40 years so its not like expectations were sky high. When its Thanksgiving and your 2 or 3 sheets to the wind you’ve got beer goggles on so sometimes Joey Harrington can look like Peyton Manning if you squint hard enough.

69 of the week: A Bit Redundant