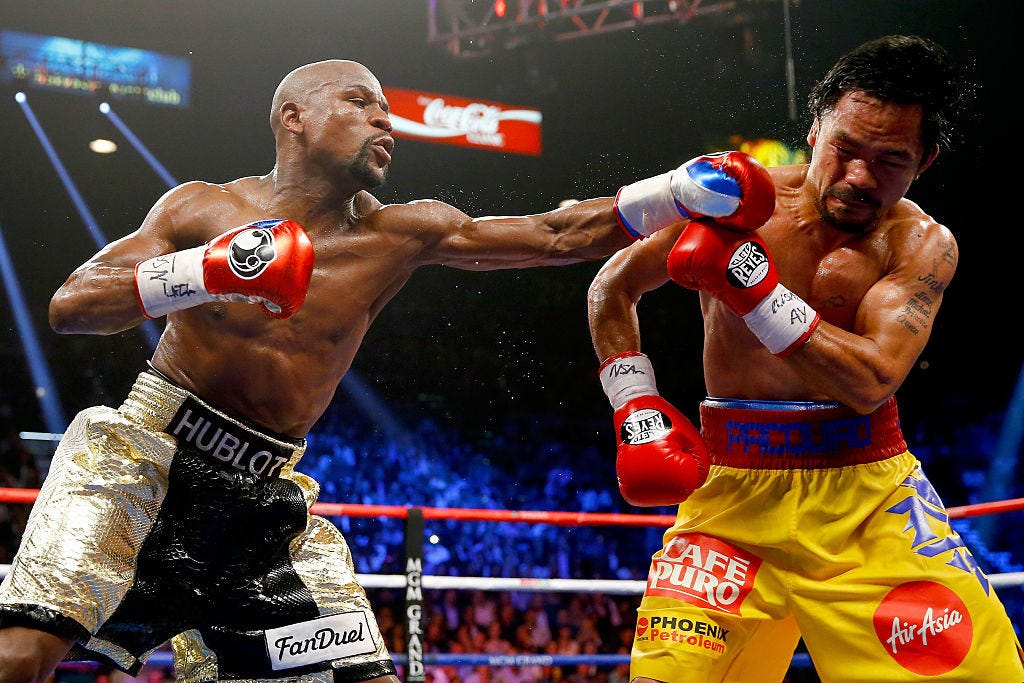 SI Boxing – Boxing promoter Bob Arum says WBO welterweight champion Manny Pacquiao will fight again in the spring and adds that the chances of a rematch with Floyd Mayweather are at “75%.”

“Like everyone else, I’m guessing there will be a rematch.” Arum told ESPN.com. “I give it 75%. Do I know it’s gonna happen? No. Do I know if Floyd wants the fight? No. I know nothing more than the public knows at this point and what I observed.”

Pacquaio lost to Mayweather by unanimous decision in May 2015. The fight shattered the pay-per-view record with 4.4 million buys, which generated more than $400 million in revenue. The almost 17,000 spectators at the MGM Grand Garden Arena in Las Vegas paid nearly $72 million to see the fight.

Pacquiao made approximately $150 million and Mayweather took home $250 million for that fight.

Mayweather (49–0, 26 KOs) has not fought since beating Andre Berto in September 2015, but he did attend Pacquiao’s fight on Saturday.

“Floyd came to the fight and he was very friendly with [Top Rank president] Todd [duBoef] and some of our staff,” Arum said . “Now, that doesn’t mean that the fight will happen, but if it does, it won’t take a long time to make because the animosity that was there before the first fight is gone. There’s no more animosity between the camps.”

Hey guys remember that fight we all paid for that was talked about forever and didn’t live up to the hype even a little bit? Well good news, the fighters are 2 years older than they were and they’re going to do it all again!

Couple of things. Obviously I’ll watch, any boxing fan or sports fan is going to watch. That doesn’t mean I’m happy about it but it’s the truth. Just like some shitty color rush game on Thursday Night, there are some sporting events I will watch no matter what the quality. Second, the only thing that makes this compelling is if Pacquiao wins and ruins Mayweather’s record, that’s it. I’ll root for it and pray for it but at the end of the day we all know what’s going to happen. Mayweather will win because he’s too technically sound to get hit squarely, and we’ll all say it was a huge letdown even though we knew it was going to be from the moment it was announced. Awesome right? I’ve always been a boxing guy but this just sucks, UFC this weekend will be a million times more entertaining than this fight, facts are facts.

Bonus, all the articles telling you are a bad person for buying this fight because both of these guys are kind of shitheads. Fun times all round.