The time is here ladies and gents- MLB promo season. Next up after that is Spring Training, and then it will be Opening Day before we know it. I’m a sucker for giveaways and bobbleheads and shit like that, so this is a big day for me. The last few years I’ve done my top Orioles giveaways, and they’ve done some good ones. But there are some absolute beauts in store for this year. Lets jump right in. 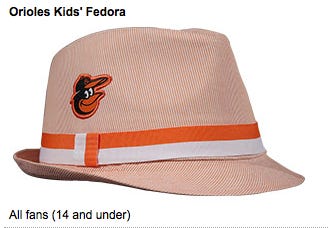 -Kids Fedora (April 9, All Fans 14 and under)- For the kids who want to look like Jason Whitlock and get your ass kicked as you walk around recess, they are giving away fedoras. I’d boot my kid so damn far if he ever tried to wear this hat.

-Fireworks (various dates)- I love me some fireworks, but lets be real. No one wants to be in Baltimore past dark and hear loud bangs like that. You don’t know whether to look up at the sky, or duck below the windows. 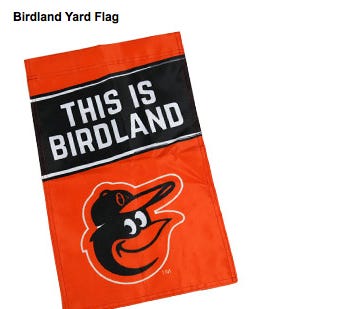 10. Birdland Yard Flag (May 9, First 20,000 people 15 and over)- What better way to show your neighborhood that the entire DMV area is Birdland? This flag is being given out against the Nationals, how nice of the Orioles to give current Orioles fans a flag, as well as the Nats fans who all grew up Orioles fans. They can put these flags up in their room next to their pictures of Cal and Brady.

9. T Shirts (Various Days, All Fans)- Straight up, I love me a free t shirt, and there isn’t much I won’t do for a free shirt. The Birds had some great shirts last year, the Hyun-Soo Kim shirts, Emoji PowerCo shirt, 50th Anniversary World Series Champions shirts. I fully expect another round of great t shirts that I will somehow end up with a million of. I need one to be Gausman themed, the guy deserves something.

8. Infielders Bottle Stopper Set (July 22 All fans 21 and over)- I think the bottle stoppers are the things that go in wine bottles? If so, I think I’m going to start drinking wine so I can use these. What better way to celebrate the best infield in baseball, than stuffing Manny Machado and Chris Davis into a bottle of your finest bottle of red? These should be a neat little giveaway.

7. Orioles Hooded Sweatshirt (September 23 all fans over 15)- Always a fan of the hoodie giveaway. Not the best or thickest material, but good enough to get you through those October playoff games. Plus, it’s better than dropping $75 on one at the pro shop. Can’t have enough hoodies, you know the ladies love to hoard yours. 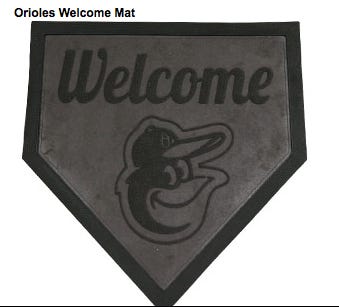 6. Orioles Welcome Mat (April 22, First 20,000 15 and over)- How nice of the current Orioles to pay tribute to the 14 straight losing seasons that the Birds had by giving out a doormat with the Oriole bird on it. The Birds were the doormat for the A.L. East for YEARS, but not anymore, you guys. This is a sneaky good giveaway, creative too.

5. 25th Anniversary Oriole Park at Camden Yards Replica Ballpark  (August 19 All Fans)- What better way to celebrate the best ballpark in baseball than with a replica ballpark giveaway? It changed the way baseball stadiums are made now, so it’s time to celebrate it. It’s OPACY’s 25th Birthday so it will be a special night with this giveaway. This is going to be a collectors item that I’m gonna need to get my hands on for sure.

4. Orioles Floppy Hat (June 2 First 20,000 people 21 and over)- No promo schedule is complete without a floppy hat. You need a floppy hat for 1 reason, and 1 reason only. Wearing it to Seacrets with a throwback basketball jersey while you drink no less than 1,000 Pain In De Asses downey ocean. A classic giveaway that will never ever get old.

3. Manny Machado Starting Lineup Figurine (June 3 all fans)- I’m totes excited for this one. Fun Fact- I’m a HUGE McFarlane Sports figure guy, have tons of them. Just sit on eBay and bid on random football and baseball player McFarlanes. They’re dope. If this is anything like those figurines, then it should be a pretty dope giveaway. Any giveaway involving Manny is going to be a hit, the Gnome last year, bobblehead a few years ago, this one will go right in the display case with those. I’m anxious to see what it looks like too, my guess is a figurine of him murdering a ball.

2. Jonathan Schoop (August 5 First 25,000 fans 15 and over) and Zach Britton (July 1 First 25,000 fans 15 and over) Bobbleheads- These will be the big ones. Bobbleheads always attract the big crowds, luckily these are for the first 25K AND YES BEFORE YOU MAKE AN ATTENDANCE JOKE, there WILL be over 25K at both games. Jonathan is coming off a career year, and is slowly becoming one of the best second baseman in the game, good for him for getting a bobblehead. We all know about the season Zach Britton had last year, greatest season by a closer ever. Don’t you dare make a joke about the Wild Card game either, but it would be pretty funny if the bobblehead is of Britton sitting in the pen. Hmm. Either way, these are my second best giveaways of the season, make sure you get out there to grab them. 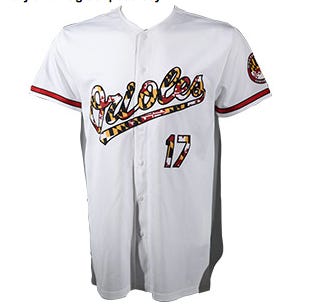 1. Maryland Flag Script Jersey (May 20, All Fans)- The RUNAWAY number 1 choice for best giveaway. This jersey is just so god damn beautiful. I know what you’re thinking. “People from Maryland are obsessed with their flag.” Yeah, we are. Because it is the dopest flag ever made because the one with stars and stripes. I just think the rest of you are jealous your flag doesn’t look as cool. I can’t even picture one other states’ flag,  you know why? Because all your flags suck. The Birds did the Maryland flag hat last year, but stepped it up big time for this giveaway. I can’t wait to wear this thing every god damn day in the summer.

Love the giveaways this season, and love that baseball season starts soon. Pitchers and catchers report next week, World Baseball Classic coming up, then regular season ball for everyone. Best time of the year. See you at the yard for some sick giveaways. Also, I’ll be in studio with 105.7 The Fan tonight from 7-9 discussing the Orioles offseason so far, go ahead and give it a listen.