I seriously can’t believe the cop didn’t shoot this guy. Not cause of all the hubbub about police shootings, but because this guy just stole his fucking car and he’s an armed human. Incredible restraint there by the cop, but I guess it’s better to get your car stolen than to be the latest cop in the news getting crucified for use of deadly force. Still, it’s gonna be tough ambling back into the station after your car got stolen out from under you because you couldn’t subdue a suspect in the middle of the street in broad daylight. And what was that old man doing? Trying to help the officer or the guy he was fighting? Either way, he surely just enabled the man’s escape. Come on guy, too man chefs’ll spoil the broth. Just let the officer do his job.

It’s a tough week for police getting their cars stolen. First it was this guy: 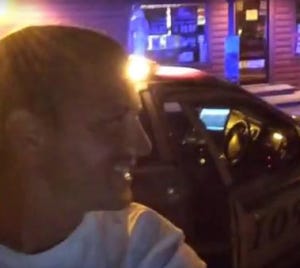 Stealing a cop car, then posting this video of himself listening to country music and describing his music taste as he joyrode around in the stolen vehicle.

Now it’s this poor officer, losing a wrestling match like Tex going against Smitty (a reminder to check into Lunchtime Snaps With Smitty) and getting his whip brodied right under his nose like it’s goddamned GTA. Can we get some fucking backup?