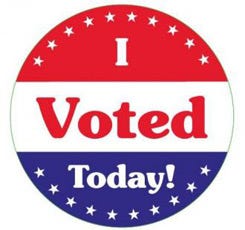 I tried to be a responsible citizen today by going to vote early. I didn’t have to stand in line for an eternity because I was there as soon as the polling station opened. I was adulting like a real boy.

There were so many rules that I didn’t want to abide by. I did, though, which is the reason there is regrettably no dope ass selfie of me tapping the touchscreen in my booth.

I was so happy and proud of myself for voting early. Voting early means that I won’t be in one of those insane lines on Election Day which is a big time pro-move by me. This is my fourth presidential election as a voter so you could say that I’m pretty good at it.

After I smashed that down ballot option to save time, I was driving away happy as a pig in shit and then it hit me; I didn’t get a sticker. I have a lunch meeting this afternoon, so I’m meeting some folks at a restaurant. I was looking forward to stunting all over the average citizens who don’t take their civic duties as seriously as I do. But now what? Now it’s just a normal Monday meeting where I will have multiple beers during lunch while wearing my Halloween costume which will suspiciously not have an I Voted sticker on it for the world to see. Will they think my voting tale is a lie? Fuck.

The worst part is that I have to wait four more years to get that damn sticker which also means that I will go EIGHT YEARS between having that sticker. I know what you are thinking, “Chaps, you can get the sticker in two years at the midterm elections.” Please. Only suckers vote for local and congressional races which also can include the Senate. Fuck that. Not important unless there’s an issue like getting candidates through the Supreme Court or something. I don’t see that happening anytime soon, so I’ll stick to the big elections.

Anyway, not having an I Voted sticker is the worst thing that has ever happened to me.