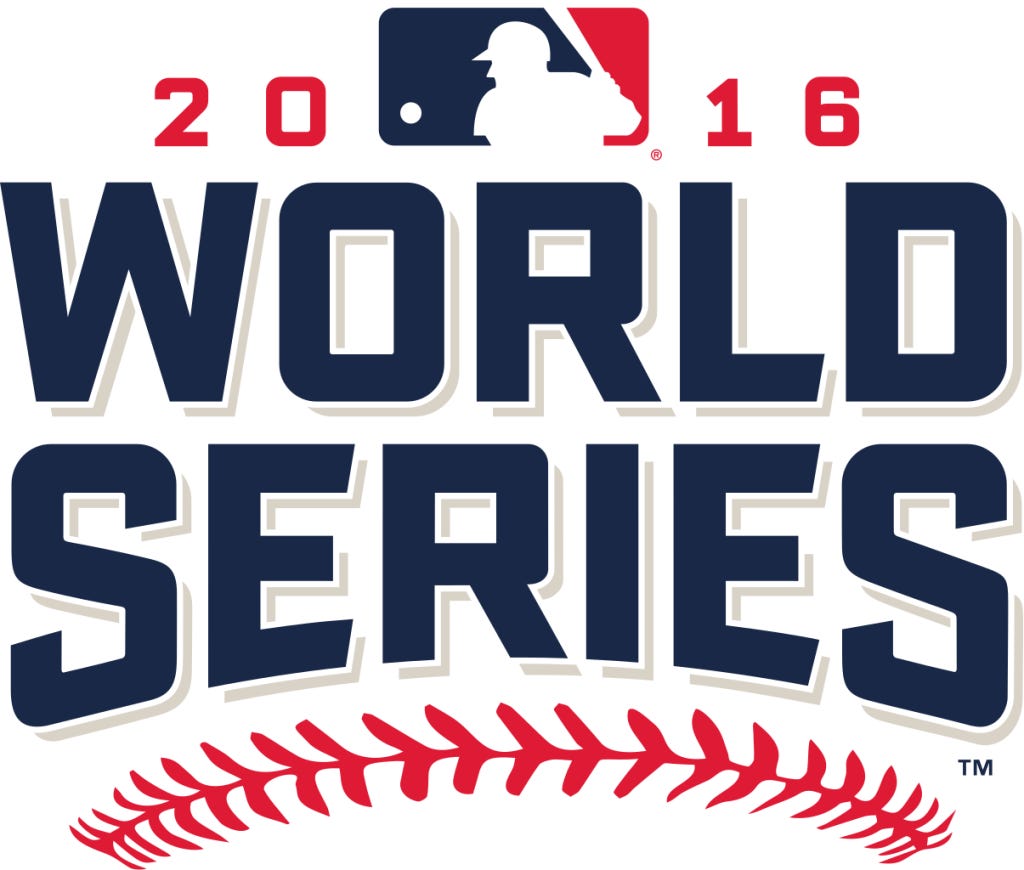 Yesterday was the worst. Just the absolute worst. This is the first time I’ve ever had to wait in-between World Series games and it totally blows. I don’t know how fans of traditionally successful franchises do it. Time moves slower. Food tastes worst. And my will to live outside of these games has reached a record low.

On the bright side, opening pitch for game 3 is around the corner. So let’s get ready with an in-depth look at Indians’ starting pitcher, Josh Tomlin. We’re starting here because I think Tomlin is capable of turning in a big start for the Indians and I don’t want you to endure that without at least understanding why. And then on top of that, understanding Tomlin will help better understand how the Cubs approach him and ultimately play tonight. So let’s do it.

Step 1 is looking at Tomlin’s numbers for the year to get a foundation on his stuff and style. And at first glance, Tomlin was overwhelmingly below average this year:

Here’s where Tomlin is terrible compared to league average:

And here’s where Tomlin is better than league average:

Again, at first glance this is pretty terrible. It’s obvious Tomlin is benefited by an extremely low walk rate at 1.03 per nine, which ranks best in MLB. Outside that, though, it looks like Tomlin doesn’t really do anything well as evidenced by some advanced metrics. The table below captures these metrics. Red is where Tomlin finished in the bottom 25% of all 73 qualified starting pitchers in 2016. Green is the top 25%.

And again, this is pretty terrible. He’s close to dead last in homeruns per 9 innings and strikeout rate. He’s not much better at limiting hits or stranding runners. And most telling is his Fielding Independent Pitching (FIP) rate at 4.88, which measures a pitcher’s effectiveness at preventing HR, BB, HBP and causing strikeouts. FIP essentially allows you to evaluate a pitcher’s dominance relative to his peers. So for the sake of comparison, consider the following:

So really everything points to Tomlin being meat. His standard numbers stink. His ratios stink. His advanced metrics stink. Everything stinks and this guy’s a bum. Right?

A quick glance at his game logs from 2016 reveal Tomlin ran into just about the worst 6 game stretch in August you could possibly put together. I’m talking downright putrid. Like everyone thinks Tomlin would save himself a lot of time and trouble if he just went out and shot himself kinda bad. (Bonus points for relevant Major League reference.)

5 straight losses to start the month. Tomlin surrendered about 30% of the season’s homeruns and doubles in just 15% of the season’s innings. He made it through 6 innings just once. He registered 5 of his 6 lowest game scores for the year. And he very nearly pitched himself out of the rotation but for an elbow injury to Danny Salazar. So for all intents, and purposes, August was a month to forget.

So let’s forget it and look at the impact doing so has on Tomlin’s 2016 numbers:

That’s a pretty solid season when you take out Tomlin’s disastrous August. He’s well below league average in ERA (by almost a full run) and BA against. His slugging still kind of sucks but his WHIP goes from pretty good to about 8th best in MLB. On top of that, you see more innings per start, a better bb/k rate and a drastically better chance of the Indians actually winning.

So the next important piece of this is looking at how Tomlin bounced back in September and October:

You don’t have to be a numbers guy to understand just how much better Tomlin pitched over his last 5 starts of the regular season. Again, he was on the cusp of getting bounced from the rotation at the end of August, and instead of closing out the season on a horribly shitty note, Tomlin turned it around and literally improved on every single measurable category, including his already MLB leading walk rate.

Drastic improvement in such a short window of time doesn’t happen without drastic change. So let’s look at what Tomlin changed. Here’s Tomlin’s pitch selection from the start of the season through August:

Now compare that to games in September and October of 2016: 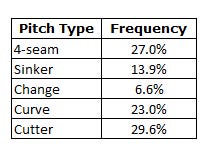 Those tables represent a fairly substantial change in philosophy. That’s because Tomlin’s cutter was getting ripped apart. All 9 of the hits he gave up to Toronto on August 20th were dick ball cutters. The pitch Tomlin relied on throughout the first 4 months of the season was failing him. It was still breaking down and away from righties at the same rate, he just couldn’t consistently command it in and out of the strike zone. The end result is a fairly consistent 87 mph cement-mixer that’s begging to be crushed onto rooftops.

So Tomlin put the cutter in his back pocket. He used to throw it about 42% of the time on 0-0. That number went down to about 30%. To compensate, he doubled his sinkers on 0-0 from about 6.1% to 18%. And then he traded in his 4-seam fastball early in the count to open up more curveballs. The whole goal of course was to give hitters a different look than what the scouting reports suggested. And obviously it worked.

Here’s how the pitch selection carried over into the 2016 postseason:
Josh Tomlin – Pitch Selection – Regular vs. Postseason

And this is where it all comes full circle. Tomlin is not the pitcher people are talking about. He is not the pitcher – right now – that you see when you pull up his season statistics. If anything, he is a completely different animal.

I say that because it’s obviously he’s different based on the numbers. But I also say that because typically, a pitcher will try to limit the amount of pitch-types he shows the first time through a lineup. For example, in the case of Kyle Hendricks, that’s the changeup. Hendricks wants to go as long as he possibly can in a given game before showing the other team his changeup. That’s the ace in his sleeve when he’s in a jam. Some would call it his “go to.” The longer he can wait to show the change to the other team, the better off he is in a start. It’s common sense.

In Tomlin’s case, his go-to has historically been the curveball. It’s been his best pitch following Tommy John in 2012, which allowed him to get healthy enough to spin the pitch with confidence. But at some point this year, he fell in love with his terrible cutter and got away from spinning his curve early in the count. As soon as the cutter completely gave way on him in August and everyone knew that we was a heavy cutter guy, his performance went to shit. And that’s when Tomlin realized he couldn’t wait any longer in starts to bring out the curve. He could change his pitch selection or continue to get rocked. So he changed his pitch selection.

Tomlin’s now throwing his curve with much more regularity down in the zone to get groundballs. And in the process, he’s been fantastic. He’s beaten the Red Sox and Blue Jays in back-to-back playoff starts. He continues to generate weak contact on the ground. And he never ever ever beats himself the way we saw Trevor Bauer do so in Game 2.

It makes sense when you consider how good the Indians’ bullpen has been down the stretch. With Miller leading the way, Tomlin doesn’t need to turn in 7 innings of quality pitching to give the Indians a chance. He just needs to make it through the lineup twice, and anything after that will be considered a bonus. The whole point is keeping it close enough to let Andrew Miller make an impact, which means grinding through 5 innings of keeping the ball in the stadium and on the ground.  If Tomlin can do that, the Indians will have a chance to steal game 3.

The reality though is he needs to do that against the best lineup in baseball with 30mph outbound winds to center. He needs to fool a team that is rarely fooled, and he needs to do it on the road on the biggest stage in baseball. It’s also worth noting that this is a Cubs team that has faced Cueto, Bumgarner, Matt Moore, Kershaw, Rich Hill and Corey Kluber at their absolute best this offseason. So comparatively speaking, Tomlin is relatively harmless.

So with all of that said, I think Tomlin has a couple effective innings to start. I think the Cubs take some pitches early, but only to get a feel for his timing and stuff. The lineup won’t take pitches to work the count in their favor … Tomlin’s a strike throwing machine so that doesn’t do much other than guarantee that you’ll hit behind in the count. Rather, the lineup should be patient just to get a feel for his tendencies. After that, it should be open season. The key will be striking in innings 3-5 because you absolutely cannot let the Indians turn a lead – even just one run – to Andrew Miller and Cody Allen. I don’t think that happens, but it’s certainly not out of the question with the way Tomlin’s pitched down the stretch.