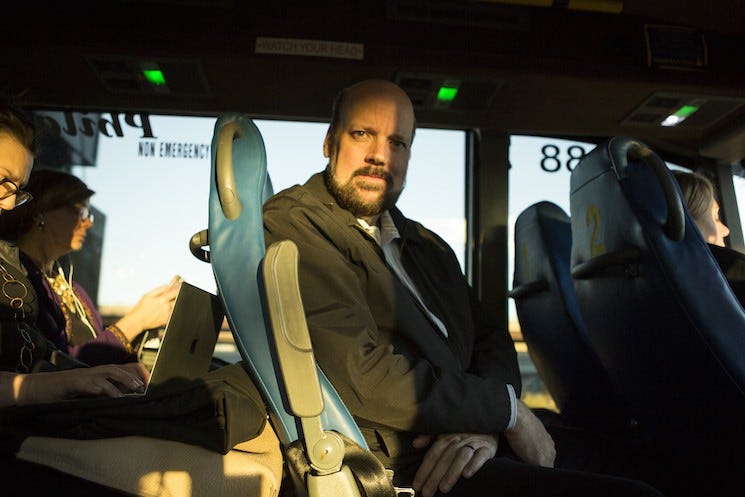 Philly – According to a 2012 report from NYU’s Rudin Center of Transportation, Philadelphia has around 42,000 “super commuters” who travel to a different city once or twice a week for work, placing it in the top five cities for super-commuting. Census records peg the number of daily commuters from Philadelphia to New York City at roughly 1,500. “Super commuters tend to be more middle class than the average worker,” Sarah Kaufman, an assistant director at the Rudin Center, writes in an email. “They’re living where it’s affordable to them and where they can enjoy a higher quality of life. NYC salaries matched with Philadelphia rents seems like a win.” Philadelphia’s median income was a little more than $34,000 in 2013, one of the lowest of all major cities, according to a 2013 Pew study. New York City’s median income is $50,711. The average rent for a one-bedroom apartment in Philadelphia is $1,350/month, compared to $3,100 in New York. Mornings are a relatively smooth two-hour ride into Manhattan. “I kind of enjoy this time, it’s meditation. I listen to the radio, and I sleep,” Kelley says. Evenings are considerably more chaotic — many days he gets home around 9:30 p.m. “On a Friday afternoon, after a long week at work, it can’t get any worse,” he says. “I know it’s gonna be an hour late, every single Friday, so I just schedule like I’m leaving at 5:00, even though I’m leaving at 4:00.” Unlike its competitors, Megabus offers an upper deck. “That’s where people get loose,” Kelley explains. “They’ll crack open a little bagged one. People smoke weed on the bus, they get caught. I saw a woman get off a fresh meth hit then get on the bus.”

This poor man’s Paul Giamatti needs to stop being a worthless Jerry Heller and start channeling his inner Chuck Rhoades to improve his life. Same goes with his 42,000(!!!) other comrades voyaging North to NYC every damn day. Albeit, not all are on the bus. The train is a horse of a different color. Amtrak/Acela between the two cities is the definition of wham, bam, thank you ma’am. An hour-twenty spent in comfortable, (sometimes) Wi-Fi available seats is a king’s carriage. The NJ Transit is takes longer, but is cheaper, less painful way of Chinese Water Torturing your life on a daily basis. For the life of me I can’t fathom taking the bus every day for that long to and from work. I don’t care if the upstairs of the Megabus is in fact Studio 54 in its drug fueled, orgy infested prime. It’s still the damn bus. Every sense is tested to its breaking point. The sights of fupas everywhere taking up multiple seats. The distinct smell of stale urine. The sounds of animals who feel the need to scream into their phones. You can even taste the lack of dignity in the air. Everything is downright miserable. No job is worth that kind of life. And these lunatics are willing taking a stroll on their own personal Trail Of Tears on a daily basis. And, yes, I am aware comparing 6 hours on a bus everyday to the Genocide of Native Americans may not be politically correct, but it’s not that far off.

But Godspeed to the common working men and women sacrificing their happiness to save a few bucks. I can’t imagine a worse commute every day to work. Oh, wait, I can.