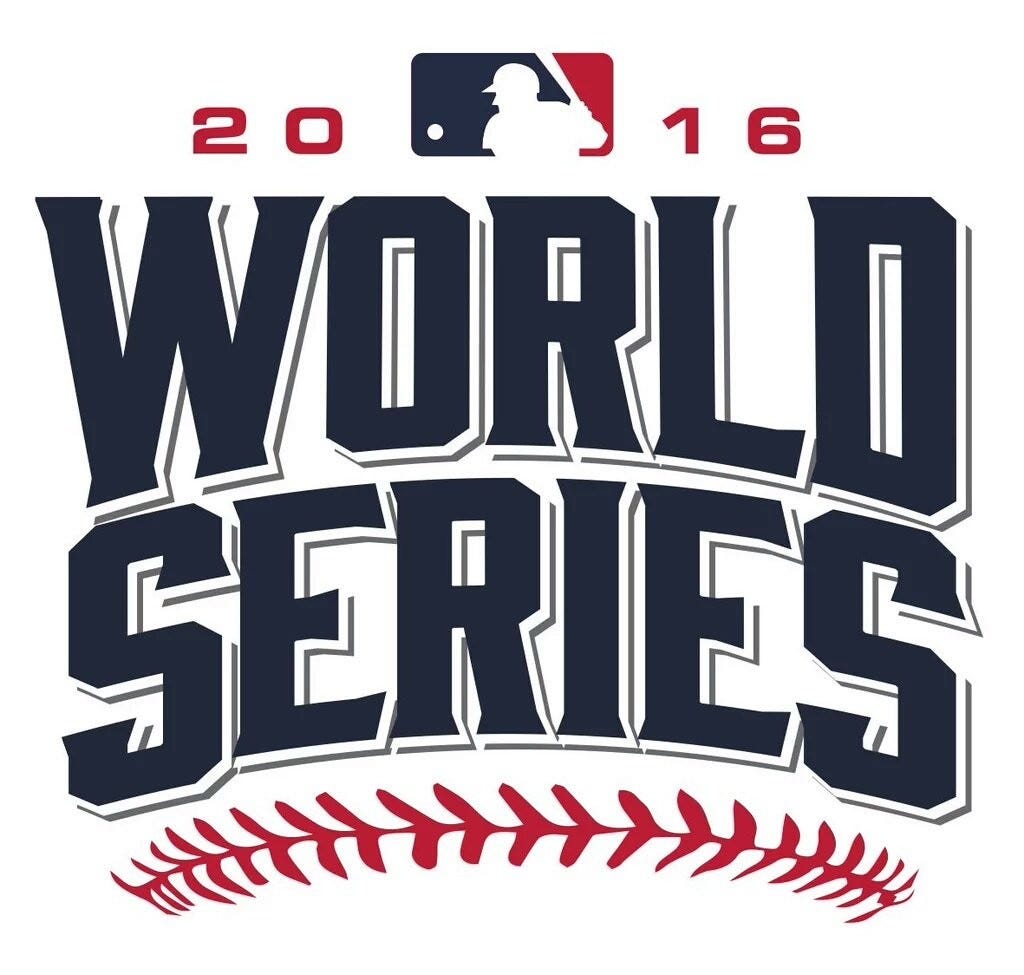 So about last night…

1. Sometimes you run into a buzzsaw starting pitcher. Sometimes that starting pitcher is fucking dialed-in. And sometimes that dialed-in buzzsaw slices through your lineup like a honey roasted virginia baked christmas ham. When that happens, you have no choice but to tip your cap to the opposing pitcher so with that said, Corey Kluber was absolutely FILTHY. It was hard not to admire his command of three separate plus-plus pitches. In the process, he looked as good as any pitcher I’ve seen in recent memory. I was most impressed with how well he painted front door sinkers to lefties (the pitches that start at a left-handed hitter’s hip then run back over the middle of the plate). It was uncomfortable watching Fowler, Rizzo and Coghlan back out of the way only to watch the ball dive right back over the strike zone.

2. It’s also hard to criticize the lineup when the opposing pitcher throws as well as Kluber did in game 1. So I won’t.

3. Few things sting more as a baseball fan than watching a potential rally end on a strikeout. It’s the black hole of fandom. One second you’re high as a kite, rifling through the batting order in your head figuring out a reasonable amount of runs to score given the circumstances of your rally. Then next thing you know Andrew Miller and his dirty uncle charlie set your hopes and dreams on fire by striking out David Ross and Kyle Schwarber with runners in scoring position down 3-0 to end the 7th and 8th respectively. I absolutely hate it when that happens.

4. Speaking of Andrew Miller, he threw 46 pitches in game 1. That’s 19 more than any game he’s pitched this year, and the most pitches he’s thrown since September 2011. Of course it’s fantastic to get wear and tear on Miller’s arm early in the series, and I’m fairly certain he won’t be available for game 2. But I think it’s more important that the entire lineup got a chance to see his stuff this soon. Rizzo said seeing Kershaw in game 2 made the difference for game 6. Obviously they didn’t see Miller as much as Kershaw, but I still think it’s going to pay dividends later in the series. Everyone knows the advantage shifts to hitters the more often they see a pitcher.

5. Francisco Lindor is really, really fucking good.
6. Speaking of Lindor, anyone making a big deal out of Baez bullshitting around with him after he doubled in the bottom of the 8th … anyone crying about Baez laughing with Lindor there down 3-0 is the runaway favorite for Hardo Of The Year. The HOTY. Seriously if you’re in that crowd please do me a solid and pound sand. Baez can run a card game in-between pitches at second base if he damn well pleases and there isn’t anything anyone can (or will) do about it. Remember: The reason we love Baez is because he’s a spark-plug in every sense of the word, and his personality is no exception.

7. Zobrist looked outstanding against Kluber and Miller. He has such a compact, level swing that matches up really well against power stuff. Because it’s compact, he can wait to start his swing relative to a normal big leaguer. Because he can wait, he has more time to see the pitch. Because he has more time – even though it’s just fractions of a second – Zobrist can better recognize the pitch. And because he can better recognize the pitch, he’s better able to put the barrel on the center of the baseball. That’s why Zobrist is considered one of baseball’s best fastball hitters and it all starts with a compact swing. It also helps to be close personal friends with Jesus Christ, allegedly.

8. Lester got some bad luck in the first inning with a bases loaded infield single, but not before he issued back-to-back two out walks to Mike Napoli and Carlos Santana. Next thing you know, the bases are loaded for a Jose Ramirez dribbler into the thirdbase Bermuda triangle and the Cubs are suddenly down 1-0.

9. You can’t complain about the umpires when Kluber pitches like he did last night. I thought the zone was exactly what you see 162 games a year – a few bad calls on close pitches. Nothing malicious. Smoltz nailed it when he was talking about homeplate umpire Larry Vanover’s setup behind the dish and how he naturally favors the left side of the zone. And unfortunately for Lester, he was throwing predominantly to the right side of the zone. Really nothing you can do about that, so on to the next. 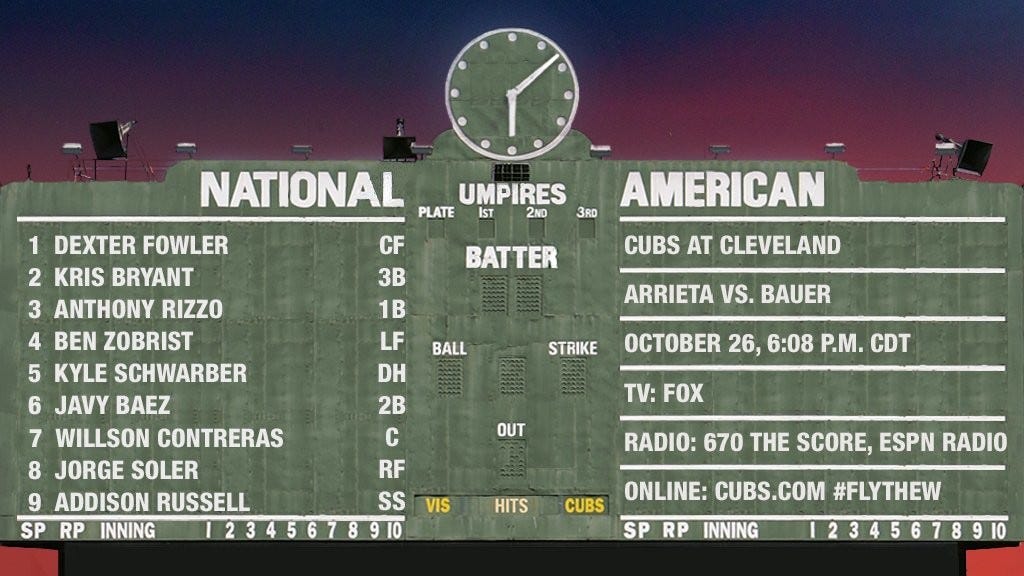 1. Trevor Bauer is pretty good. One day he’ll turn out to be really good. But for now, he’s pretty good. He works off a two seam fastball like Kluber. It’s not as good, but it’s kind of the same concept of just pounding the bottom of the strike zone early in the count to get to the swing and miss stuff later.

2. Bauer has a filthy curveball and changeup. He typically only throws the changeup when he’s behind or even in the count, so expect to see that quite a bit tonight.

3. Bauer refuses to pitch inside to righties. It’s all away, away and more away. As a result, righties hit him much harder than lefties which is why you’re seeing Soler and Contreras in the lineup tonight. Righties registered a 100 OPS+ and a .257 average against Bauer in 2016. Compare that to lefties who hit just .239 with an 86 OPS+.

4. I’m under the impression Jake doesn’t like pitching to Contreras. Maybe it’s the 5.18 ERA Jake has in 6 games with Contreras. And maybe I’m influenced by his 1.34 ERA to David Ross in 4 starts this year. I just know that it’s very important Jake is comfortable from pitch 1 with anything and everything in his universe. I need his chi to be balanced, and Contreras better not get in the fucking way of it.

5. Schwarber is definitely hitting one into Canadian air space this evening. He looked magnificent in Game 1. Most impressed with his pitch recognition. He flinched on the first breaking ball and after that he was dialed in like he’s been in the lineup the whole year. That’s insane to me. Also, the lineup looks so, so much better with him in it.

7. I think Arrieta is the kind of player who benefits from watching a lineup the night before he pitches. I’m not going through the game logs to prove this up, but I’d be willing to bet a whole lot of money that Arrieta’s numbers are much better in games 2 and 3 of a series than in games 1 throughout the regular season. He’s a very observational and analytical pitcher. He’s in touch with what the other team is trying to do to beat him. So watching the opposing lineup the night before gives him an opportunity to visualize a gameplan and get mentally prepared. And that’s basically the key to his success… being in a balanced frame of mind and not overthrowing. If he does that, you’ll see something pretty similar to what Kluber did last night.