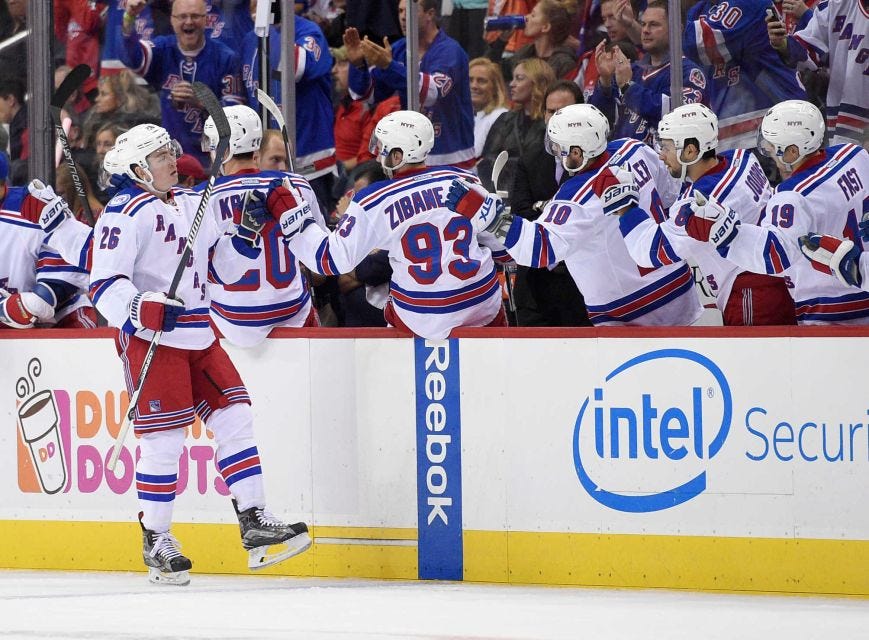 After a 4-point weekend highlighted by a big-time comeback in Washington Saturday, the rested Rangers welcome the battered B’s to MSG fresh off a 5-0 home drubbing. The Blueshirts high-flying offense gets to tee off against a squad anchored by a pair of goalies that would be in Providence if not for injuries (hello, 50% off Papa John’s). Adding to Boston’s wounded is FA splash David Backes, who is sidelined after (apparently minor) elbow surgery. Tonight is set up to be a mismatch the speedy Rangers should take full advantage of as long as they account for Marchand & Pastrnak, who’ve been responsible for 7 of their team’s 15 goals this season. Lundqivst will man the pipes again after a strong weekend while Kreider & Buchnevich miss another one.

It’ll be interesting to see what the Rangers do when fully healthy – someone’s gotta go once Kreider & Buch are ready. Obviously McIlrath is not in AV’s plans barring injuries but I’m not sure NY wants to risk losing the 24 year-old for nothing on waivers. The odd man out would most likely be Josh Jooris with Lindberg back in the fold centering the 4th line. He’s been solid & popped his NYR cherry against the Yotes but his lack of special teams minutes should be the deciding factor against any other forward hitting the wire. Sending Buchnevich or Skjei down, who are both waiver-exempt, hurts the current team more than potentially losing Jooris to a claim.

AV’s squad continues to be very well-balanced offensively. Eight forwards with at least two goals, none with more than three. The bottom 6 are chipping in & even Dan Girardi tallied a game-winner Sunday night. Speaking of game-winners, how about this beauty from Jimmy Vesey to take down the Caps?

Jimmy Vesey’s second goal of the game, #NYR up 3-2 pic.twitter.com/HZGXOGVkCq

That’s a big boy goal right there from a kid taking college classes just a few months ago. Wish Nash still had the stones to drive the puck to the net like that. Vesey’s been as-advertised after his first handful of games & looks to have Vigneault’s full trust. After protecting him early, Vesey’s seen 17+ minutes in each of his last three games. That fearless finish in Washington proved that, while I’m sure there will be bumps along the way, Jimmy Vesey absolutely belongs right where he is.

Defensively, their need for another top gun alongside McDonagh is obvious. I’m in the minority in not treating Nick Holden like the new Girardi, but he’s obviously not a top-pair guy. Still, for a blueliner who hadn’t seen his first full NHL season until 27 years old & was had for a 4th-round pick, he’s been OK. Done exactly what was expected – play physical, block some shots & stay out of the box. Until the Rangers make a play for Trouba/Shatty/anyone from Anaheim he’s their best option opposite McD. When 4 Rangers are seeing 20 minutes on the back end & none of them are named Girardi, that’s reason enough to be content for now. Plenty of season left to make a move.

Let’s just make sure the good times keep rolling with what should be a prime-time slaughter of a B’s team with no bite.