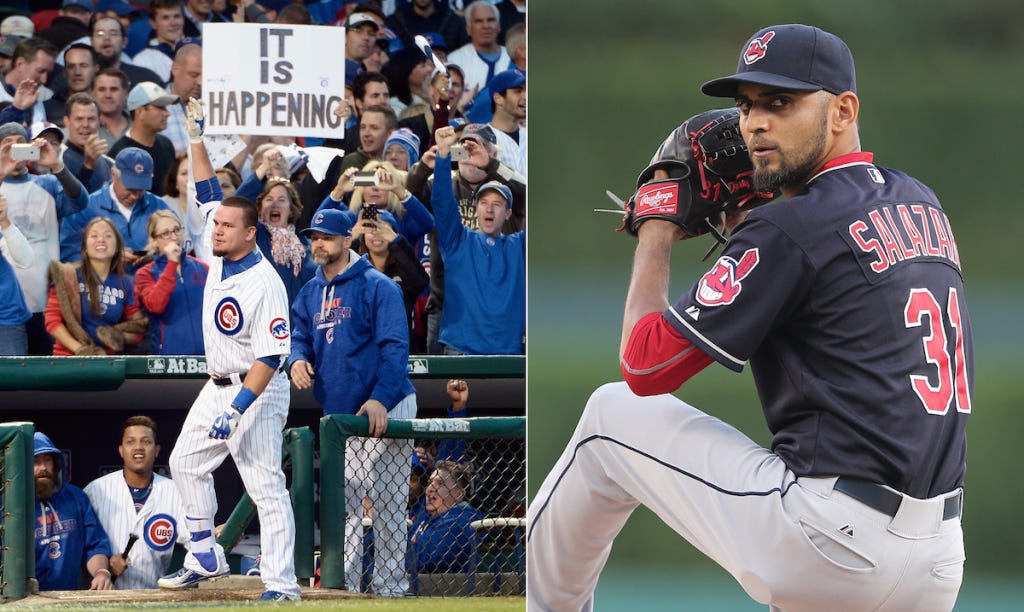 The World Series rosters are set, and both the Chicago Cubs and the Cleveland Indians have reinforcements on the way.

In the first week of the season, the Cubs lost some major fire power in their lineup when 23-year-old Kyle Schwarber tore his ACL after he collided with Dexter Fowler in the outfield in Arizona. He hasn’t seen game action in the majors since then, and that was back on April 7, his second game of the year. For the Indians, they at least had the benefit of Danny Salazar making 25 starts for them this year, but he could not have gone down at a more inconvenient time for the Tribe. Salazar hit the disabled list for some time in August with elbow inflammation, but it was an injury to his forearm at the beginning of September that kept him off the postseason roster against Boston in the ALDS, and against Toronto in the ALCS.

Now they’re back. But what is it, exactly, that these two teams are getting back? How do you quantify the impact that each player will have, especially when one’s a hitter and one’s a pitcher? I guess you would start with what they’ve brought to the table in the past. I’m counting the postseason, because Schwarber hit .333 with a 1.308 OPS for the Cubs in October last year. Among all the Cubs players who played at least 70 games last year — Schwarber played in 78 between the regular season and postseason — Schwarber had the highest OPS on the team (.891). Now, that’s not entirely fair because guys like Anthony Rizzo and Kris Bryant played more than double the amount of games as Schwarber, but it’s more just to give you an idea of the kind of impact bat he is.

When it comes to Salazar, the Indians are getting back a starting pitcher who has a 3.63 ERA over the last two seasons, which is still only third best on his own team. Just goes to show you how great the loss of Carlos Carrasco (3.49 ERA) has been, too. But if you want to take a more recent approach to Salazar’s impact, then you can say that he was second in the American League in ERA at the All Star break (2.75). This is a really good pitcher we’re talking about, one who doesn’t get enough credit because he has guys like Corey Kluber and Carrasco ahead of him in the rotation.

But we’re not trying to evaluate what impact these two guys have had in the past. Both have been great. We’re tying to determine who will have the greatest impact in this year’s World Series. The answer to that question, for me, is Kyle Schwarber. Why? It’s pretty simple, actually. The Indians have home field advantage in this series. If the World Series goes the distance, and we see a seven-game series play out, then you will see Schwarber in the Cubs’ lineup as their DH four times. You’ll also see him as a pinch hitter when they play at Wrigley Field. Schwarber has the opportunity to impact every single game of this series.

The vibe that I’m getting is that Salazar would not be ready to return right now if this were the regular season, and the same can’t be said for Schwarber. By all accounts, that dude is ready, and he’s in great shape. Pitchers need time to get ramped up. They need rehab starts, and they need to face live hitters, build their pitch counts higher and higher, and Salazar doesn’t have that luxury. He’s been throwing in the bullpen, mixing in new pitches lately that he hadn’t been throwing previously during his rehab process, and facing live hitters who are his own teammates, but it’s extremely difficult to replicate game action if it’s not real game action.

Now, that’s not to say that Salazar can’t come back, take the ball in Game 4 and give the Indians a solid five innings of work. I think that’s the plan, actually, is to have him piggyback a start with Ryan Merritt at some point, so Game 4 makes the most sense after Corey Kluber, Trevor Bauer and Josh Tomlin get their turns. But it’s all systems go with Schwarber, whereas the Indians are trying to take a little more cautious approach with Salazar’s return. It’s great that he’s back. They’re certainly a better team with him on the roster than without him, but Schwarber has a chance to impact every game, and the best case scenario is that Salazar impacts roughly half a game as a starter, possibly a little bit more than that if he’s also used as a reliever.