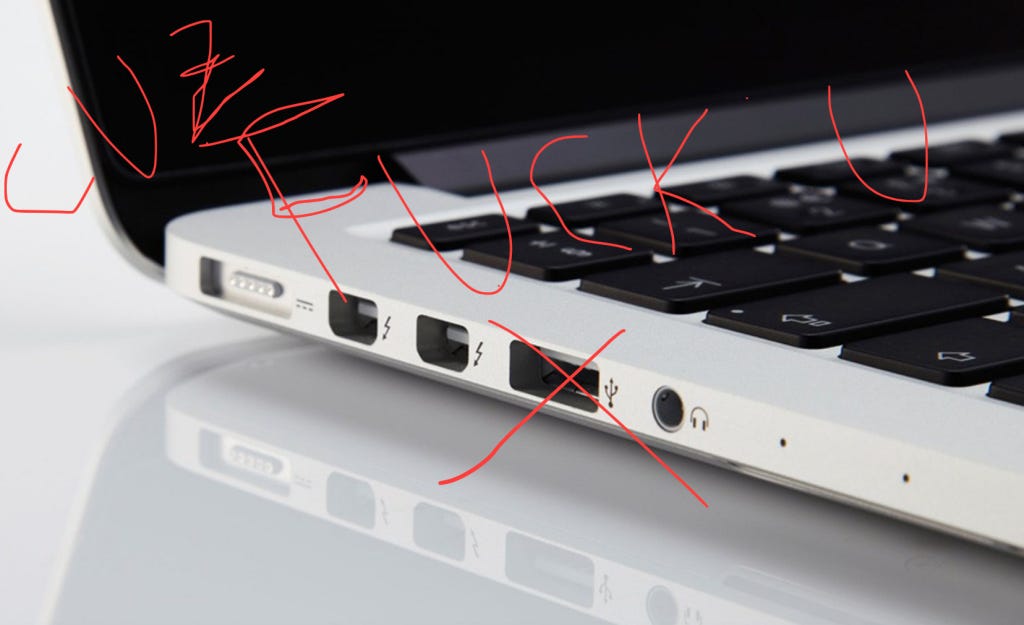 (HighSnob) – If there’s one thing we’ve learned over the past year, it’s that when it comes to the march of progress and moving forward, Apple and CEO Tim Cook are savage AF. Having already ditched the earphone jack on the iPhone 7, rumors now suggest that the regular USB port will be next to meet the Cupertino company’s scythe. The retiring of the earphone jack was correctly predicted by Japanese tech site Macotakara, who now paints a similarly bleak outlook for the traditional USB port. One rumor suggests that while the traditional USB ports could be removed, Apple might keep one or more USB Type-C ports — which are used to charge most new Android phones. Although still unconfirmed, it’s not likely that Apple would be using anything with “USB” in its name ever again if it did decide to remove the ports. Apple users with USB accessories would either have to upgrade their hardware or use a proxy adapter similar to the iPhone 7’s lightning dock.

What in the world is going on over at Apple? Are they just trying to see how fucking dumb they can be and still get us sheep to buy shit? I mean no USB port? That’s insanity. I’m not even a “real” person who has to use shit like thumb drives or a Hank person who needs to use external hard drives because their computer is so full of video, I’m just a person who loses those charger cubes all the time. The only place I can charge my phone is my laptop because it’s the only thing I never lose. Those fucking wall charging cubes are almost as hard to keep track of as the Apple TV remote. Once they’re moved from an outlet once you can pretty much kiss them goodbye. Bring one out to a bar? Bring one to a hotel room? A friend’s apartment? It’s fucking gone. Kiss it goodbye. It’s like an electronic sock the way it just disappears. So yeah, you can count me out on buying the new MacBook. Much like how my XBox is a $300 Netflix player, my laptop is like a $1500 phone charger and instant messenger. Without the USB port it’s pretty much pointless to me.