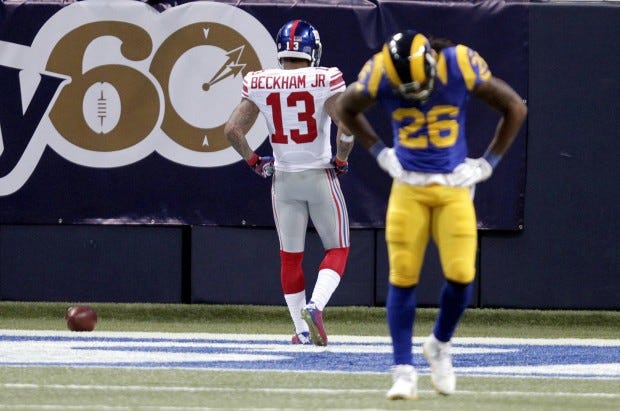 Let’s just get this out of the way: Fuck Josh Brown. Fuck the Giants leadership for how they pushed off acting on this situation & their overly-supportive sound bytes. Fuck Brown’s now-former teammates for their diplomatic, distancing quotes instead of taking this opportunity to be vocal on the most disgusting problem in pro sports. The so-called “no-nonsense, classy” rep is apparently nothing more than a facade & from a fan’s perspective this past week has been a flat-out disgrace. Rant over.

Winning won’t cover up the black eye on this franchise but there’s a season to play nonetheless. After getting back to .500 with a W over Baltimore, the key to that win is once again the focal point. As Odell Beckham was smashing rookie records left & right, the Rams took to beyond the boundaries to get ODB off his game – resulting in this:

Couple notes from this rumble. First, who’d have thought getting ejected for throwing hands would be the career highlight for both Preston Parker & DaMontre Moore? Also, even though he’s been one of the best G-Men so far, it’s a bad look for the Rams version of Janoris Jenkins getting man-handled by a dude in Dockers. 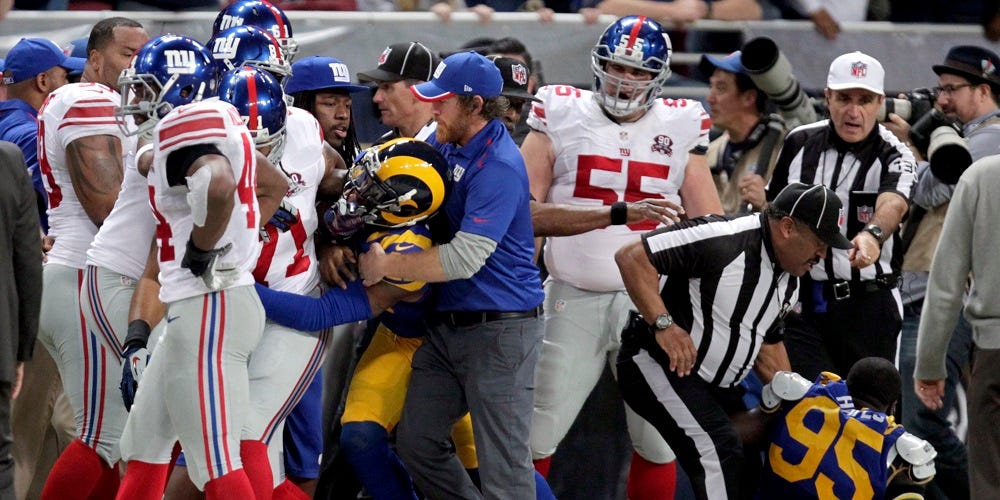 Interesting to look back at the Giants sound bites after this game from 2 years ago. Odell: “I was just trying to find a way for me to keep my composure and not get the little penalties that were going to hurt the team. It was sometimes difficult today, but I tried my best to keep my head in the game and stay the course.” He did get a taunting penalty that game which Coughlin chewed him out for. Eli also made comments after the game about Beckham needing to keep his head on a swivel because of his showboating.

Doesn’t look like much has changed since then. Fast-forward to earlier this week with a quote from Rams coach Jeff Fisher: “I think Odell learned that last week when a big touchdown play that shifted the game he let loose of his emotions, took his helmet off, and now they’re kicking off from the 20-yard line…I think the whole league needs to learn from that. Give yourself a chance to win. That could have cost them a victory last week. We don’t want to put ourselves in a position to where those kind of things happen to us.”

Nice under-the-radar needling from Fisher, followed by essentially saying they’ll play to the whistle and not bait Beckham into extracurricular stuff. We’ll see what Gregg “Bountygate” Williams thinks about that after kickoff. If it’s not the Rams slowing him down (CB Trumaine Johnson is out) ODB still has a hip injury to get past. As of warm-ups this morning, reports said he will play but he wasn’t his usual self. If he’s out there as a decoy, Cruz & Shepard will need to turn back the clocks a month to carry the load against a beatable secondary without their top gun.

This has gotta be a game where the defense breaks out. Case Keenum has racked up as many TO as TD so the takeaways need to come. JPP & Vernon have gotta get their hands on him. Obviously they’ll be focused on corralling Todd Gurley (busy day for Snacks & Hankins), which opposing teams have done so far to the tune of 2.9 YPC, but if this big money D can’t impose their will on Case Keenum there’s gonna be a lot of doubt hanging over their bye week.

With Dallas off & Philly hosting the undefeated Vikes, Big Blue just need help from the Lions against the streaking Skins to tighten up the NFC East with a win in England. Victory into a bye week is always a big deal & the Rams aren’t good enough to spoil it. After a disappointing week for Giants fans watching their organization do nothing, the least they can do is take care of business on the field.