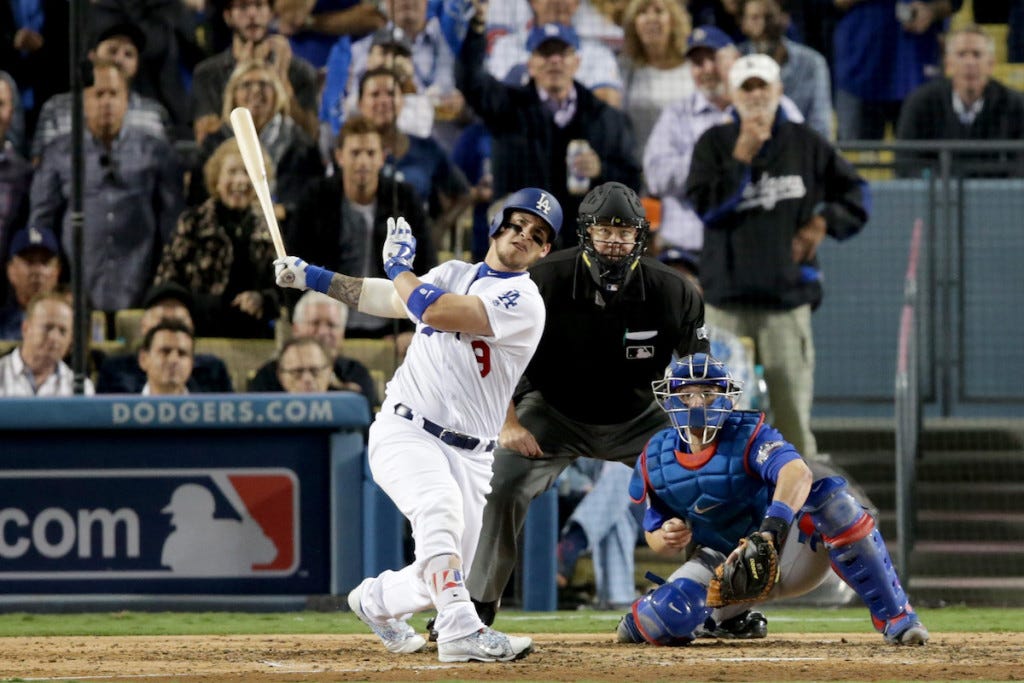 Without a doubt, this is the best three-man rotation in the game. This was also the very same three-man rotation that the Chicago Cubs trotted out there in the first three games of the National League Championship Series against the Los Angeles Dodgers, a series in which they now trail two games to one. But the pitching hasn’t been the problem for the Cubs, really. Hendricks was solid in Game 2, tossing 5.1 innings of one-run ball, albeit in a 1-0 loss. Lester was pretty good in Game 1, giving his team six innings, and only allowing one earned run in a Cubbies victory. But that was back when the Cubs’ bats were alive and well, scoring eight runs on nine hits in the series opener.

Since then, though, it’s been a completely different story. The Cubs haven’t scored a single run since Game 1. Two games, two shutouts. In Games 2 and 3, the Cubs are hitting .100 with a .260 OPS. For the whole postseason, the Cubs’ top five hitters are batting .167 with a .506 OPS, and that’s WITH Kris Bryant hitting .357 with a 1.007 OPS in that same clip, so you can just imagine how bad the numbers are for Dexter Fowler, Anthony Rizzo, Ben Zobrist, and Addison Russell. You don’t have to imagine. I’ll tell you — they’re hitting .115 with a .371 OPS this postseason. It gets even worse when you consider that Jason Heyward is hitting .105 with a .413 OPS, but my expectations for Heyward could not have been lower after the year he’s had.

While the Cubs couldn’t hit water if they fell out of a boat right now, you’ve got several Dodgers hitters who are red hot in this series. Andrew Toles, Yasmani Grandal, Adrian Gonzalez, Justin Turner, and Corey Seager are hitting a combined .295 with a .915 OPS in the NLCS, as both Grandal and Turner took Arrieta deep in LA’s 6-0 victory in Game 3. And, not to kick Cubs fans while they’re down, but in Arrieta’s last four postseason starts, the Cubs are 1-3, and Arrieta has a 5.83 ERA, while allowing 14 earned runs and four home runs in 21.2 innings. Not great.

And, of course, you’ve gotta give it up to Rich Hill, who’s had a WILD last year or so. At the age of 36, this guy was working out with his local legion team last summer, got a shot with the Red Sox in September, earned himself a one-year deal worth $6 million with the A’s, was the most highly sought after arm at the trade deadline this year, was acquired by the Dodgers when the best pitcher on the planet, Clayton Kershaw, was out for two months with a herniated disc in his back, and last night, took the mound and shut out the 103-win Chicago Cubs in Game 3 of the National League Championship Series. He might be the best story of 2016.

Stating the obvious, the Cubs have to win Game 4. For as dominant as they were in the regular reason, they were three outs away from the San Francisco Giants forcing a decisive Game 5 against them in the NLDS, but avoided it thanks to a classic Giants bullpen meltdown. Now, with a more dangerous opponent on the other side, the Cubs find themselves in a scenario where if they lose Game 4, they’ll somehow need to haul off three consecutive victories, which means that beating Kershaw becomes mandatory. You never want to be in that position, especially when your offense has been as bad as it has been in the last two games.