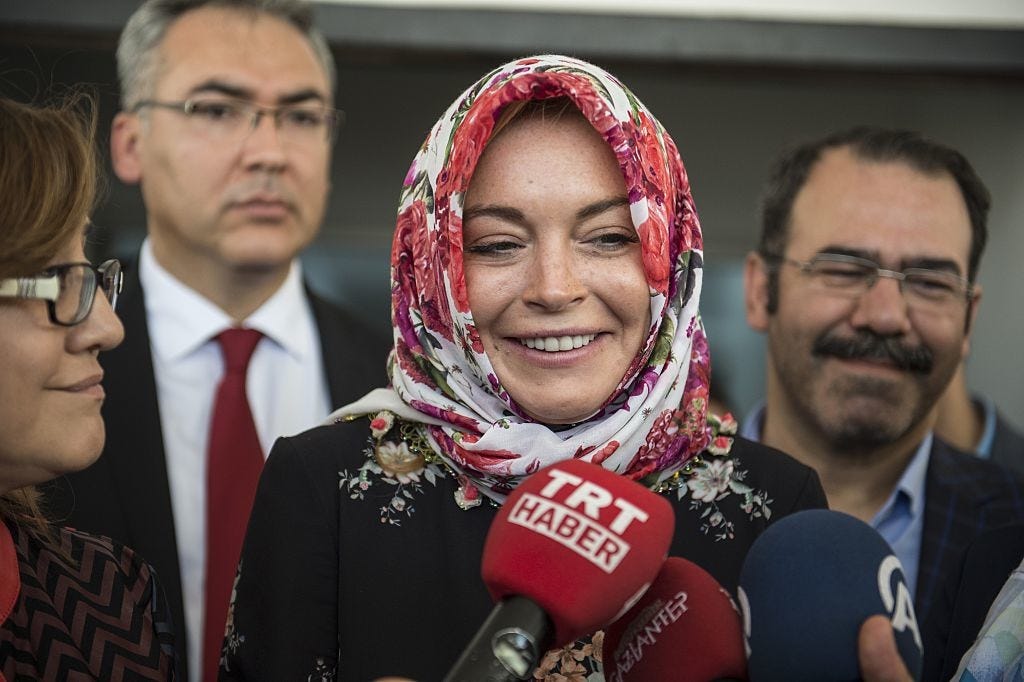 Page Six- Lindsay Lohan’s recent humanitarian visit to Syrian refugee camps in Turkey bizarrely ties in to her new nightclub — named Lohan — in Athens, Greece. Page Six has learned that Lohan and her team plan to offer an energy drink to refugees. According to an insider, Lohan has partnered with a German energy drink, Mintanine. The beverage, which is available at Lohan’s eponymous Greek nightclub, will also be supplied at the refugee camps. “There’s hardly food, water or anything” else at the camp, explained a source close to LiLo, “so at this point sending anything is helpful.” We guess so?

I can’t lie guys. I did NOT see Lindsay Lohan’s career path of child actor to sex symbol to washed up celebrity taking a hard left into humanitarian. But here we are. You have to give Lohan’s P.R. firm credit for this one. A celebrity simply throwing on a headscarf and pledging to donate a bunch of stuff to refugees automatically makes you Mother Theresa in peoples’ eyes. So at least Lindsay is trying. And by trying I mean she is trying like a kid tries to make a boo boo feel better by having their parents kiss it. Or Cher donating her skis to the Pismo Beach Disaster Relief in Clueless. Lindsay simply doesn’t know any better. Look at her upbringing. It makes perfect since that Lindsay thinks loading up refugees with shitty energy drinks is the way to go.

Sure the boring, liberal media will tell you to donate water or canned goods to the less fortunate. But Linds is looking to the party started in Turkey. I mean I guess if I was a refugee, I’d probably prefer just to sleep the days away until I found a new place to live. But I guess there is something to be said to be zooted out of your mind after slugging a few drinks that likely are 100 times more toxic than Booty Juice (Tropic Thunder is underrated imho). Nothing beats a good energy drink high. You feel invincible, happy, and everything makes perfect sense. Plus you become an impeccable dancer. I suppose that could be a more fun way of spending your time as a refugee than just hoping for the best from people that donate to Rescue.org. So maybe Lindsay isn’t all that crazy after all, even though giving a bunch of tired potentially fed up refugees unlimited energy may not be the best idea.