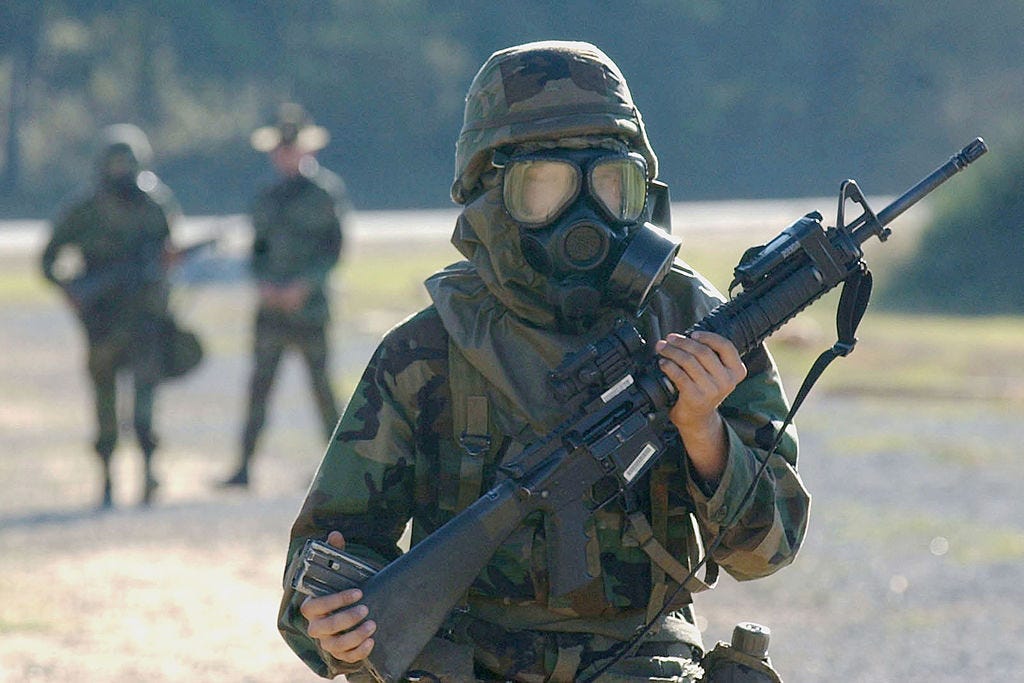 Yesterday I detailed the massive Iraqi-led coalition operation to liberate Mosul — Iraq’s second largest city — from ISIS control. You should read it; it’s good and informative.

This will be, no joke, one of the largest battles the planet has seen in years. Over 80,000 coalition forces are involved from nearly 90 different countries. Around 5,000 ISIS soldiers are involved, having prepped, prepared and planted themselves throughout the city for months. Good guy forces have already uncovered and overtaken several tunnels, for example, complete with kitchens, storming in on ISIS terrorists whipping up dinner.

Yes, we are literally in their kitchen.

There are many, many dangers to this operation — like thousands of civilians being rounded up as human shields, hundreds of thousands of citizens being forced to flee their homes, and thousands of terrorists evacuating Mosul and returning to their home roots in the EU.

And another dire concern — chemical weapons.

It’s no secret that ISIS is, to some capacity, in possession of chemical weapons. They may be large, they may be small, and ISIS may not even know how to use them, but they’re there. They exist. Just a few weeks ago, US forces confirmed this existence, detecting the presence of a sulfur mustard agent.

In a previously undisclosed incident, U.S. forces confirmed the presence of a sulfur mustard agent on Islamic State munition fragments on Oct. 5, [an] official said. The Islamic State had targeted local forces, not U.S. or coalition troops.

Chemicals weapons are bad and they’re RARELY used. Nearly everyone on earth is in agreement that once their usage becomes the norm, we’re all fucked. Syrians used sarin gas during the Syrian Civil War in 2013; it sent shockwaves throughout the world community and led many to call for a collaborate, global, forceful overthrowing of the Syrian military.

Will ISIS use them? Our belief is that if they know how, they will. Another wildly important reminder of the surreal dangers our heroes — American and foreign alike — face entering this monumental battle.

Is it worth it? If we want to truly and completely destroy ISIS, absolutely it is. US officials “believe some of Islamic State’s best fighters are in Mosul” and the city stands as the terror group’s last, and biggest, stronghold in Iraq. ISIS’ leader is also believed to be holed up in Mosul.