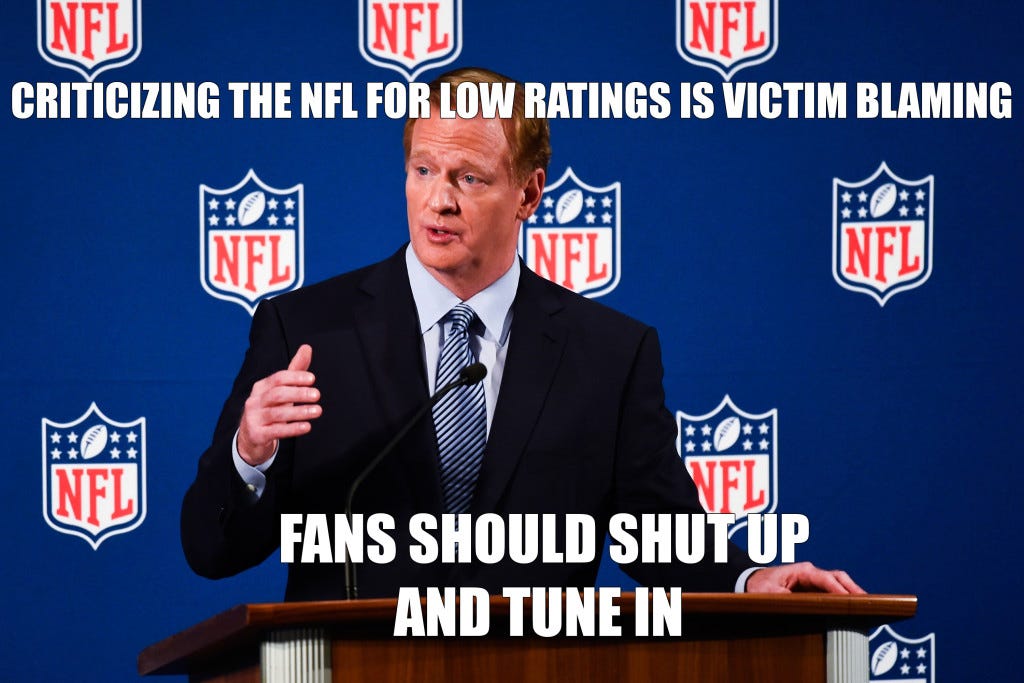 Ok this is big boy talk here. So if your not prepared to hear a little inconvenient truth you can smash that back button on your browser and go back to baseball prospecticus or whatever site you like to use to make your sports reading as close to homework as possble. I’m gonna go there and if your not ready to hear some adult-talk you should just leave immedately.

NFL ratings are lower than a 100 year-old blue whales ball-sack and unless corrective action is taken immediately we are going to be confronted with the terrible possbility of Roger Goodell losing his job. Some people are blaming the low TV numbers on market saturation,  terrible games, and the fact that players themselves are hurting ratings by watching less game film- but I’m here to tell you that the real culprit here- is ungreatful fans. Commissioner Goodell needs to stand up and lead if he wants to get this ship righted I’ve got some ideas to help him:

-Start supsending fans. The NFL is a accountability league and there’s nothing in the CBA that says Goodell’s power is limited from suspending fans for conduct detrimental to the league if they dont tune in. So why not expand blackout policies to include cities where the TV ratings arent as high as they were in the previous league year? Its a privilage not a right to watch the NFL, and maybe they just need to be grounded until they learn a lesson. You treat your customers like dirt and they stick to you like mud. So Goodell should stop catering to bad fans’ every beck and call with in-stadium wifi or by slashing jersey prices to under $200. Instead, maybe think about adding another commercial in between the touchdown and the PAT, or after every first down until ratings go back up.

-Bring back helmet to helmet hits. Kind of ironic that the league has spent so much time over the past 5 years establishing concusson protocols when it should of been paying more care to its own baseline test for ratings. Not only does it help keep fans exited, but also, if players are seeing double- that counts for twice the ratings on a Neilson box when they watch tape

-There’s not enough media coverage of the league. Darren Rovell just came out today with a great prediction for the future of media and thats that brands will hire journalists to work for them directly, kind of like if Darren Rovell got a gig with budweiser or Ray Rice got a gig with OTIS systems. The NFL already has NFL network so the logcal next step is for them to develop another network dedicated to covering the NFL network like white Randy Moss and Ian Rapoport

-Schedule games on Tuesdays, Wendsdays, and Fridays also and have them all played in England and Australia so they can also covers Saturday mornings before college football starts. Right now the league is operating at only 3/7th capactity. That means there’s a market ineffeciency out there waiting to be exploited and its like CNN showed us- if you make it into a 24-hour league the qualty of the product goes up. Also maybe suspend some more star players and throw more flags during prime time games to get rid of all this celebration grafitti thats making the game seem too much like a game

In conclusion, criticizing the NFL for its low ratings is victim-blaming at its finest and we should all be ashamed of ourselves.