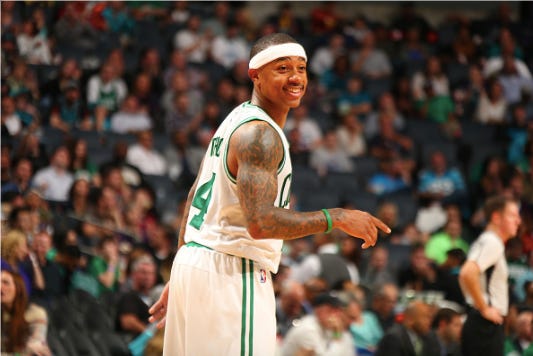 (CBS) – Boston Celtics guard Isaiah Thomas is not a fan of the triangle offense, which the New York Knicks are kind of, sort of running under coach Jeff Hornacek this season. He told the New York Daily News’ Stefan Bondy that, for teams that don’t employ legends like Michael Jordan, Kobe Bryant, Shaquille O’Neal, there’s no point in trying to teach everybody the system:

“I just think if you don’t have Kobe or Shaq or Michael Jordan, the triangle doesn’t work,” the Celtics All-Star told the Daily News.

Hey, he’s not wrong. When was the last time the triangle offense was effective when it was used without those type of guys? After walking into MSG and pulling out their fourth win in a row, I love the chirping from Isaiah to the Knicks. Point blank, “your system stinks and you’ll never beat us with it because your puppet master is a stubborn old man who is so asleep he doesn’t realize who is on his roster.” Shots everywhere. Shots at Phil, shots at Melo, that preseason game was electric and this division needs a good Knicks/Celts rivalry so I hope this can be the spark that lights the fire.

I also think Isaiah was sticking up for his friend and former coach Jeff Hornacek who was a big Isaiah guy during his time in Phoenix, saving him from the wasteland that is Sacramento. He knows that if Hornacek has to run this offense, his job is probably cooked within a couple years. That’s just the kind of guy Isaiah is, about as loyal a guy as they come.

The Knicks come to the better, more successful Garden on Wednesday, and I look forward to Isaiah backing up his claim.