I’m usually not very optimistic about the Bears and this season has certainly been a challenge so far, but I really feel that the Bears are about to make a run that will remind us of 1985. Things are starting to click and injuries are starting to heal. God is touching our players and ridding them of pain. 12-4 is still in our sights and I doubt anyone has missed the playoffs with that record.

Last week’s 29-23 loss to the Colts was disappointing to say the least, but I take solace in the fact that if our other franchise QB was healthy and it was his turn to play a series, he would have hit Jefferies with the game winning TD.  Unfortunately, Cutty is going to be on the shelf again so we’ll have to deal with just one elite QB. I guess things could be worse. Let’s move on to the Jagwires.

Fun Fact: Indianapolis is the most sexually satisfied city in the country according to “Men’s Health” magazine.

The Bears lead the all-time series 4-2.  Seems like the Bears have a winning record against every team they play. We’re only going to look back at the most recent meeting from 2012.

The Bears manhandled the Jags 41-3. Bear for Life, Armando Allen put the final nail in the Jags coffin with a spectacular 46 yard run in the 4th quarter.  The Bears D dominated Blaine Gabbert sacking him 3 times, picking him twice for TDs and forcing a fumble. I expect more of the same this week against Blake Bortles. 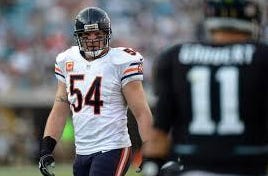 Zach Miller will likely be working with Vic Fangio and the Bears D this week showing them the ins and outs of the Jags playbook. Chris Prosinski will be working with Dowell Loggains with the Jags defensive playbook.  Between that and the 4th Phase I don’t see a possible way the Jags can beat the Bears in this one.

Offensive Player to Watch: Zach Miller is out for revenge and should dominate this game.

Defensive Player to Watch: Chris Prosinski is out for revenge and should dominate this game.

*Should be 5-0-0 if not for the referees, injuries, global warming, and a couple of bad bounces.