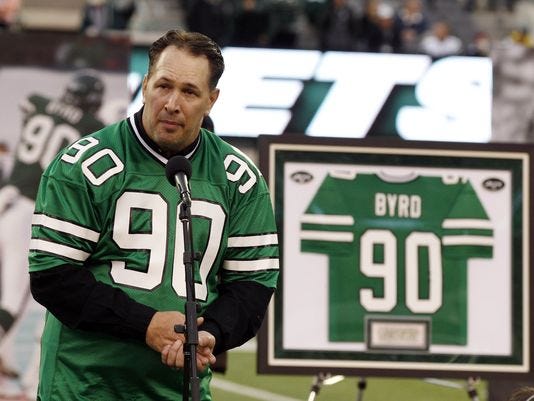 Claremore, OK : A former NFL star was killed Saturday in a Rogers County crash.OHP officials said Dennis Byrd was killed and two minors were injured in a crash Saturday in Rogers County.A 17-year-old male driving a 2000 Ford Explorer traveled left of center and struck a 2004 Hummer H2. The teen was taken to the hospital with injuries to his head, trunk, arms and legs.Byrd was driving the hummer and pronounced dead at the scene. A 12-year-old passenger of Byrd’s vehicle was also taken to the hospital with multiple injuries.Byrd played for the New York Jets from 1989-1992. Prior to that he attended and played for the University of Tulsa.

I was horrified to see this news, because I had always had a memory of Byrd as the first game I ever attended was the Jets -Chiefs game when he got paralyzed. My dad was a big Jets fan, and I remember, even as a little kid, how quiet the stadium was sensing something was wrong. I remember watching the made for tv movie and Dennis sprinkling dirt from his home in Oklahoma on the hospital floor as part of his ritual when the nurse told him this was his new field. Awful , awful news.

A few years ago the Jets retired his number, as a homage to everything he’d overcome in his life and an inspiration to everyone about no matter what the setback life deals you, things are never insurmountable.

Prayers to the Byrd family. “Fairness doesn’t govern life and death, if it did no good person would ever die too young” – Mitch Albom.