This goal has been 107 days in the making for PK Subban. Just over 3.5 months ago, Subban was sent to Nashville from Montreal in a trade that shocked the world (well… I mean… at least those of us who love hockey). There had always been rumors about the Canadiens trading PK Subban but nobody believed any of it. Nobody thought that Marc Bergevin could be so dumb to actually get rid of one of the most electrifying talents the league has to offer. But there were all were. The afternoon of June 29th and boom, the course of history was changed.

So last night. In his first game in Nashville. On his first shot in a Predators uniform. PK Subban lights the lamp with a bomb from the point on the powerplay. Not sure if you could script it up any better. And then he caps it off with one of the finer fist pumps these eyes have ever seen. What a beauty. And he’s certainly not wrong about this.

I actually pray for Bergevin’s sake that this was a personality trade and not a hockey trade. At least that would make a little more sense.

Also–PK is already the most stylish son of a bitch that Nashville has to offer. 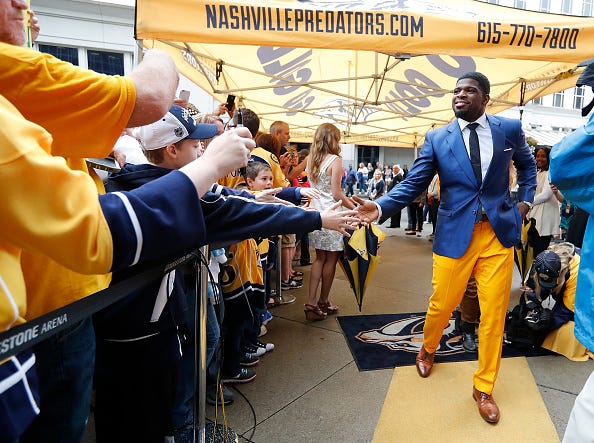 Last sidenote: between the yellow glass partitions and the yellow helmets, there is no uglier sight to be seen than a Predators home game. Makes me want to vomit.