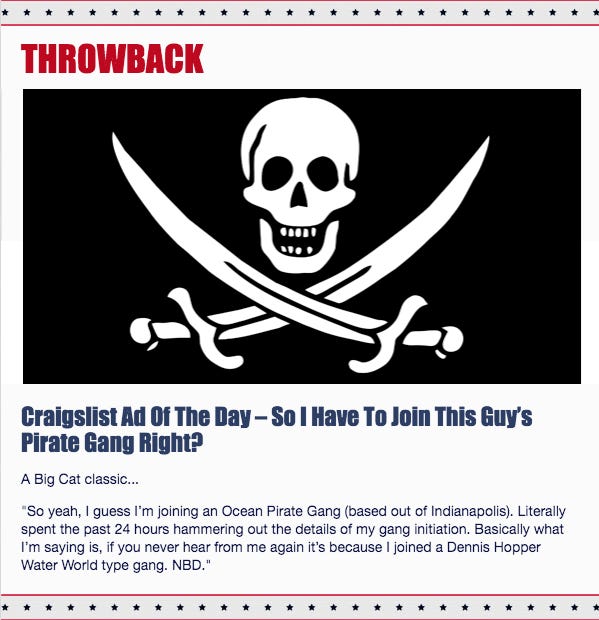 Sign up for the newsletter to get these in your inbox every weekday morning. Not going to post these forever so if you don’t want to miss out I recommend getting in on Random Thoughts.

Big Cat: Craigslist Ad Of The Day – So I Have To Join This Guy’s Pirate Gang Right?

So yeah, I guess I’m joining an Ocean Pirate Gang (based out of Indianapolis). Literally spent the past 24 hours hammering out the details of my gang initiation. Basically what I’m saying is, if you never hear from me again it’s because I joined a Dennis Hopper Water World type gang. NBD.

PS
I know this probably won’t happen, but a small part of me thinks it might and I could not be more excited to start my new life as a Pirate.

listen up, im looking for people who wanna form a tightknit group of people,and once we got enough people are asses are going nautical so im most definetly going to need a top notch navigator and people really good with boats.and you gotta have a pair of balls to join.no pussies, no weak stomachs, and no half assed/half hearted motherfuckers/ the age factor is 16-25 I aint askin you to be hardcore phsyco you just gotta be ready to throwdown when shit gets ugly.i wont tolerate any crew members screwing eachother over, we take care of our own not kill or cheat our own.and hey if u got a boat that’s good for around 15 people, all the better if you want to know more hit me up at [emeraldskys@hotmail.com) but if your not 100 percent serious don’t even fuckin bother

For full effect press play before reading our email exchange

I’m in, let me know when and where.
PS
I own a handclaw
PPS
I just broke the record for most sting rays petted/poked in a single afternoon so I’m basically an oceanic expert.
______________

alright brew, tell me why exactly you want in? I aint trying to be the fuckin quizzler,i just wanna know.plain an simple

Because I’m already in a land gang named the Bad 2 the bone crew (you’ve probably heard of us) and I’m trying to expand my portfolio. Plain and simple. It’s like that famous Steven Seagal quote “I hope one day people know me as a great writer and actor and not just a sex symbol”. Tired of being a sex symbol, want to be pirate gang guy too.
Also, because we’re being upfront with each other here, I can’t judge distance over water so you’re probably going to need to find someone else to fill that hole. Literally my only weakness though. On the flip side, I’m the fastest short distance swimmer in the world.
_____________

alright utilize what knowledge of the sea u got and teach it to our new recruits..now here come the tough q’s you got a problem with killin?? remember no pussies an no half hearted motherfuckers

You got a problem with killing? Because you asking me that makes me think you do. And no, I do not, used to be a monster at Call of Duty.

that’s good real good best keep that attitude at bay though an just as long you don’t fuck with any of your crewmates. you can do anybody else in but the way I see it crew is family if you happen to find yourself breakin that code your ass is chum u got that? harming crew in any way shape or form,a no no

What happens if a crew member tries to kill me first? Are you saying I can’t even kill someone out of self defense?

yeah if one of em is trying to down you then by all means,defend your life but don’t try to fuckin wave that term around loosely and I don’t think itll a situation like that will get that far though,now heres another tough q. you down with(running substances to special customers?)and(moving {live} items to /very/ special customers?

I’m going to say no to both *wink*

good,now as of right now there are to headmasters,me and another guy,the other who is also our boat guy which may or may not have a problem with my business ethics.best to keep such knowledge away from him to be safe,but most likely if he keeps pressing we may have to/just maybe/ have to (relieve) him of command.are you cool with it?