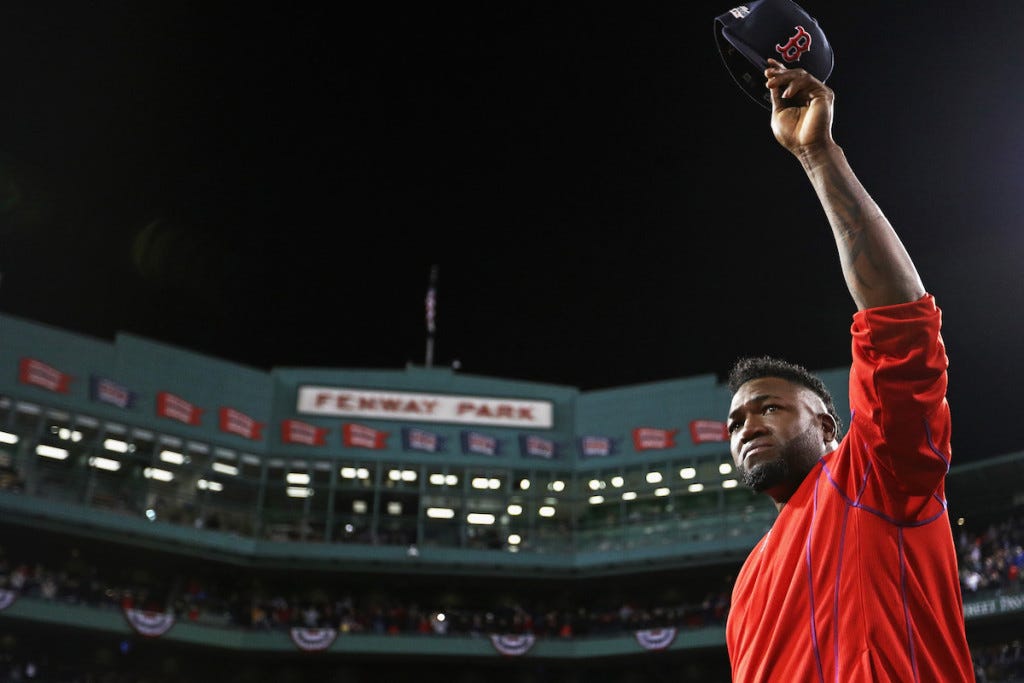 How do you measure the impact that a player has had on a franchise, a fan base, a city?

Is it the rings? For decades, Red Sox fans were tormented by their rivals in New York. The word “rings” had such a negative connotation to it for me, because that’s what we were taunted with for years upon years. I remember those obnoxious “Got Rings?” t-shirts that Yankee fans used to wear around Fenway Park in the 90’s and early 2000’s. No, we didn’t have rings. Not until David Ortiz showed up and changed everything. There was a time when many of us had accepted that just one World Series ring was never going to happen in our lifetime. Now, Ortiz walks this earth as the only man who can say that he has not one, not two, but three World Series rings with the Boston Red Sox.

It it reputation? For all intents and purposes, David Ortiz will be remembered for many things here in Boston. But when you think of David Ortiz, what’s the first thing you think about? That’s the beauty of it — everybody will think of something different. As Red Sox fans, he has impacted our lives in so many different ways. He’s the lovable teddybear with the big smile and infectious laugh, but he’s also the most feared and intimidating figure that we’ve ever seen in a batter’s box. His reputation has gone beyond just what he’s done on the field, and you can look no further than the David Ortiz Children’s Fund raising millions of dollars to help save the lives of hundreds of children.

Is it the moments? Fourteen years in a Red Sox uniform, and a lifetime of memories. Which one’s your favorite? I have a couple. I was there on that October night in 2004 when David Ortiz hammered a walk-off home run off of Paul Quantrill in Game 4 of the ALCS against the Yankees, which sparked the greatest comeback in the history of pro sports, ultimately leading to the Red Sox’ first World Series title in 86 years. I was also there on that April day in 2013 when Ortiz returned to Fenway Park for the first game after the Boston Marathon bombing. The nightmare was over, but the city was still in shock, in fear, and in mourning. That’s when Ortiz famously told us that “This is our fucking city, and nobody gonna dictate our freedom. Stay strong.”

Some day, when Ortiz gets his statue outside of Fenway Park, I hope it’s the image of him holding his fist in the air after making that speech. For all that Ortiz has done for the Red Sox organization and the city of Boston, I truly believe that was his defining moment. Despite all the big hits that he’s collected over his career, and there have been many, that’s the one moment that I’ll always end up going back to as the moment that he cemented his legacy as being the most important player in Red Sox history. Because, think of it this way, who else could’ve made a speech like that with the message resonating the same way that it did coming from Ortiz? Nobody. The answer is nobody.

But, just as Ted Williams and Carl Yastrzemski both got to do many years ago, last night was David Ortiz’s turn to bid farewell at Fenway Park, on the same field where he transformed himself from a Minnesota Twins castoff to a Hall of Famer. The way that it happened, a three-game sweep in the first round of the postseason, was very anticlimactic, and certainly not the way that any of us imagined that Ortiz would go out. However, Ortiz’s legacy was cemented long before this series with the Cleveland Indians began, and it certainly doesn’t diminish it in any way because of the way that it ended.

How do you measure the impact that a player has had on a franchise, a fan base, and a city? It’s all of it — the rings, the reputation, the moments, the laughs, the walk-offs, the speeches, the milestones, the parades, the hugs, the home runs, the legacy. All of it. David Ortiz is gone. We’ve finally reached the time that seemed like it would never come, witnessed his final at-bat, his final game-winning hit, his final World Series, his final home run, his final point towards the sky to honor his late mother, his final game. We’ve witnessed the end, but his impact on the Boston Red Sox franchise will be felt forever.

David Ortiz, this Red Sox fan thanks you. It won’t be the same without you, but it also hasn’t been the same since you got here. As a player who nobody here in Boston knew prior to your arrival, you came to a team that was historically known for losing, and you left as a legend, leaving behind a team that was known for winning championships while you were here. That’s how you measure a player’s impact.