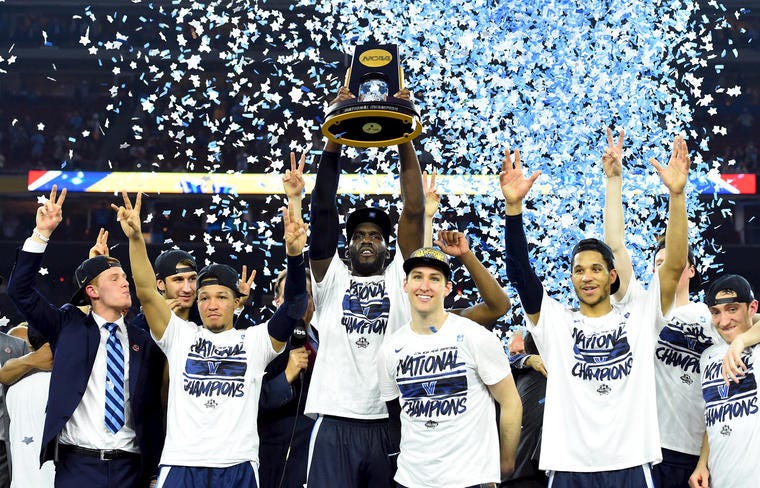 If there’s one thing about Stoolies and those who blog on the site, everyone loves to bet. Everyone wants to find that magical ticket before the season and hope someone like Nova cashes in for them come March. So we’ll take a look at that today.

Before we do Top-25 rankings, Player of the Year rankings and what not, we’ll take a look at Vegas. Who are the teams you should stay away from? Who are the shorter odds that are worth the safe bet so you have a ticket in your hand come late March? Who are the sleeper teams that can make a run to the Final Four like Syracuse did last year?

Last year we saw Villanova hit at 25/1 on most books as I gave advice to pass on them when I did this back in early November. I was dead wrong as I thought their defense would be the reason they wouldn’t win the NCAA Tournament. In fact it was the exact reason as their move to a zone – more on the zone movement in a later blog – was huge in getting them to Houston.

For simplicity sake, we’re taking the odds from Bovada. There are nine teams currently listed below 25/1, so we’ll take a look at each of those individually before jumping into some longshots.

1) Duke +400: If you want the safe bet here’s one of them. The Blue Devils are absolutely loaded, despite the injury to Harry Giles. They have guys with experience of winning a title in Grayson Allen and Amile Jefferson along with a ton of depth. The biggest problem for Duke is the lack of a true point guard, although Frank Jackson is a helluva player. They also happen to have the best coach in the game who has a history of winning.

2) Kentucky +750: You’re rarely going to get Kentucky at double digits, especially before the season starts, so at 7.5/1 it’s decent odds relatively speaking. Like every other year they have a ton of talented freshmen coming in and couple leftovers to mix with them. This year it’s Isaiah Briscoe, Derek Willis and Isaac Humphries who will provide the experience. Biggest concern for Kentucky is lack of outside shooting and depth at the guard position. But, like Duke, if you have a ticket with their name on it, you know you’re alive come March.

3) Villanova +1000: This Villanova team is going to be good. They are going to win 30 games and I like Josh Hart as a Player of the Year candidate. The problem here is it’s so damn hard to go back-to-back in college basketball. The loss of Daniel Ochefu on the defensive side of the ball is huge as he was the anchor to that defense. I’ll pass on Villanova as winning a title for those two reasons alone.

4) Kansas +1000: I’m a little surprised to see Kansas starting at 10/1 as they don’t lose a ton this offseason. They return Devonte’ Graham, Frank Mason, Carlton Bragg and Landen Lucas among others and bring in Josh Jackson – who might be the most talented player in the country. This sounds like a team destined for a No. 1 seed. Getting them at 10/1 before they can run through the Big 12 again seems like a steal.

5) Arizona +1400: If Arizona had Terrance Ferguson, I’d absolutely be in love with them. They do have a ton of talent, led by Allonzo Trier who surprised a lot of people coming back to college. It might take them some time to get comfortable playing with each other as they do have to mix some pieces and see how Ray Smith looks coming back from injury. Despite a strong recruiting class, I’ll pass on them as a national title winner.

6) Michigan State +1600: Michigan State caught a massive blow this week when Ben Carter went down with a knee injury. Carter, who is a transfer from UNLV, was expected to play the power forward spot and let Miles Bridges be the 3 or 4 depending if Izzo wanted to go small ball. It’s an Izzo team, so they’ll obviously be good but this loss is huge as he’s out indefinitely.  I’m going to pass on putting money on Michigan State.

7) North Carolina +1600: This is one of the more confusing teams in the country. They lose Brice Johnson – who was an absolute monster and Marcus Paige, who struggled for most of the year but provided that veteran leadership. Yes, there’s talent on this roster, but there’s also major question marks. The biggest one for me is Justin Jackson. He was supposed to be a star and he just hasn’t looked that part yet. Can he finally make that jump? I do like when Joel Berry did last year and he needs to be that type of player again this year. However, when it comes to winning the title, I’ll pass due to the question marks and same thing as Villanova – it’s so hard to get back to the title game.

8) Oregon +1600: This is the team that should win the Pac-12 (with Arizona right behind them). Despite Dillon Brooks missing some time, they have all the pieces to make a run again. In fact getting them at 16/1 while Arizona is at 14/1 doesn’t make a ton of sense to me. Tyler Dorsey is due for a monster year while Chris Boucher blocks almost anything at the rim. There’s depth here and they get Dylan Ennis, who only played in three games last year. I’m putting money on the Ducks.

9) Wisconsin +1600: Similar to Oregon, Wisconsin should be the favorite to win their conference. The Badgers return everyone – including Ethan Happ who I think has a legit chance to be First Team All-American. They have experience at the most important position with Bronson Koenig returning at point and surround him with a familiar face in Nigel Hayes. Add in a couple shooters and this team is dangerous. I’m in on the Badgers this year and taking them at 16/1.

So to recap for the lower odds, I’d take Duke, UK, Kansas, Oregon and Wisconsin. Here are some longer shot teams I’d be willing to put a couple bucks on.

Virginia +2500: One of these days Tony Bennett is going to get to the Final Four. He’s too good of a coach to not get there. This year, despite losing Malcolm Brogdon, he has a shot. He’s got a top two in London Perrantes and Austin Nichols who can compete with any two in the country. The jump Perrantes made last year to be more of a scorer while still distributing is the reason why they’ll be decent this year. Not to mention any team that plays top-5 defense in the country will always be there.

Xavier +3300: Don’t let the buzzer beater from Wisconsin ruin your thoughts about Xavier here as they will challenge Villanova for the Big East crown. They have three guys who can score at will in Trevon Blueitt, JP Macura and Edmond Sumner. On top of that they have a coach in Chris Mack who is wildly underrated. Look at what he did with their defense last year, mixing in the zone, especially using Macura up top to get them to a No. 2 seed in the NCAA Tournament. They won’t be losing on a buzzer beater this year.

UConn +4000: This team has the makings of one that can make a deep run in March or absolutely implode and finish 5th in the American. What they need to do is be consistent on the offensive side of the ball – especially with Rodney Purvis and Jalen Adams. Adams has the chance to be a special player and be the next Kemba/Shabazz, but needs that consistency. Much like Virginia, you know UConn will be in the top-25 defensively and that’s something that travels.

Gonzaga +6600: Again, this doesn’t make a ton of sense as to why Gonzaga is behind the likes of Maryland and West Virginia in odds. The Zags have one of the best backcourts in the country, despite never playing together because they are transfers. The group of Nigel Williams-Goss and Jordan Matthews makes this a top-15 team in the country. I’ll take my chances as they’ve gotten to the second weekend the last two years. They key? Keeping big man Przemek Karnowski healthy.