I was really trying to be positive about the Bears this week. I really wanted to do it and then this happens and I’m reminded of how awful our draft picks have been for the last decade. I know it’s still too early to call Kevin White a bust and I’ll give him the benefit of doubt when he comes back but my God. Missed his entire first season and now will miss the majority of his second season. Just can’t catch a fucking break. All I want is for this team to be competitive and it feels like it’s just so hard to get there. And the worst part? I fucking love them this Sunday at the Colts +4.5. The Colts shouldn’t be 4.5 point favorites over anyone so the Bears will rope me back in to crush me yet again when they lose by 100 to the Vikings and Packers later this month. Fuck.

Seriously though, look at the last decade. If you want to know how to put a franchise in the dumpster here is the blueprint. 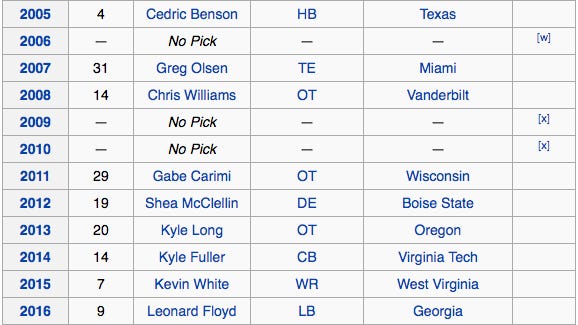