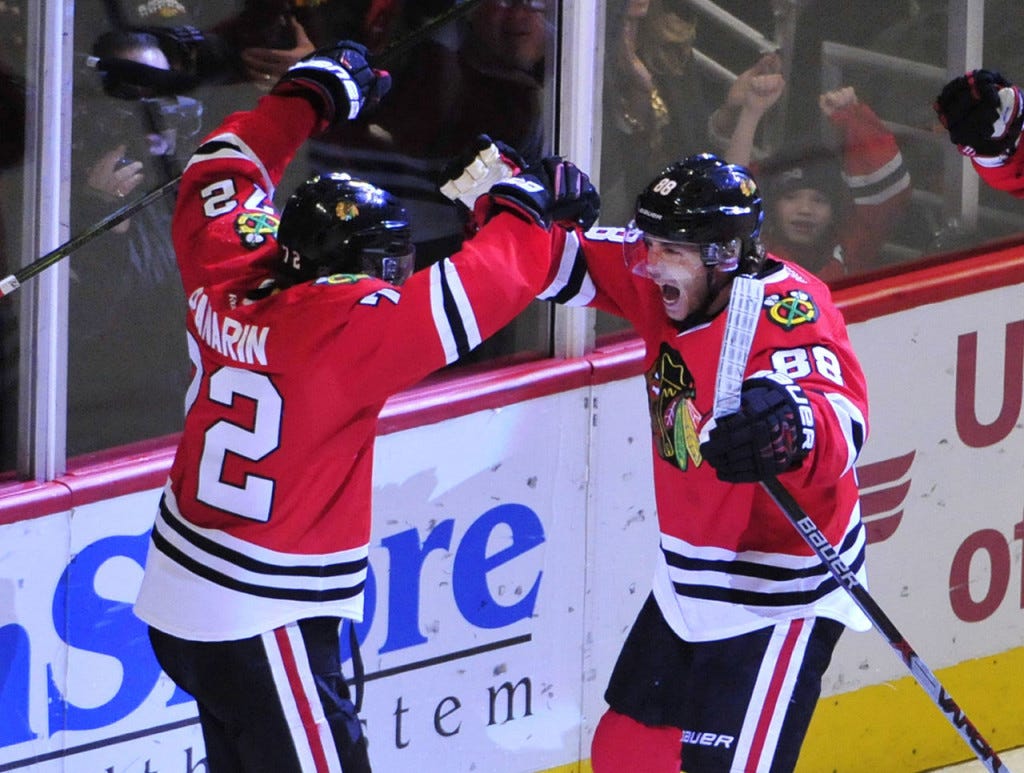 “It’s definitely a thought process. We’re saying, ‘Let’s have a look at it in camp.’ And maybe we can have a different look, or something to think about, at least, going into the season with [Jonathan Toews] and Kaner being on different lines, and having more balance on both lines.”–Joel Quenneville

Tough news when you hear that soulmates might get split up. Kane and Panarin had instant chemistry last year without even being able to speak the same language. Gretzky-Kurri, Butch-Sundance, Noah-Ally, Kane-Panarin. And now…it might be over in the name of balance. And honestly, I think that’s for the best. The Blackhawks still have several spots open, and while keeping a line together that saw Anisimov have a career year, Panarin win the Calder, and Kane win the MVP is not a bad option, it’s probably not what is best for the team.

In addition to Kane and Panarin getting split up, there’s also been a lot of chatter about Hossa dropping down to play RW next to Marcus Kruger. That line would instantly be one of the better checking lines in the NHL. A pure shut down line. That line would probably free up Toews to be a little more offensively minded since he wouldn’t necesarily be drawing the other team’s best line.

Leaving the rest of the forward spots open to Panik, Schmaltz, Motte, and Hinostroza. My best guess would be

Schmaltz has gotten work at both wing spots. I’m not exactly excited about this idea, but he has shown the ability to play with good players and has the hockey smarts to make it work with these two.

Another rookie in the top 6. Again, not an ideal situation. I wasn’t especially high on Motte before the preseason, but he has looked great early on. Another guy who knows how to play and can put himself in positions to score. Panik makes sense here as well, but I’m a little concerned about his ability to finish on the end of Kane plays. Motte has a little more natural talent.

I am higher on Panik than most. I think he has ideal size and speed and he’s shown the ability to make an impact on the forecheck. Panik was a 2nd round pick that never really developed in the Toronto organization, but that organization sucked at developing talent. In the proper structure Panik has been effective. Can he finish? Can he be consistently impactful over 82 games? I don’t know. I know he can skate, and that he’s shown a willingness to be use his body. I think this line has potential to turn defense into offense and that Hossa should give more quality minutes with less mileage on his legs over the course of the season.

Prototypical fourth line. Hinostroza is a natural center with nice hands and great quickness. This line will provide a spark. Desjardins is also a capable center and might be able to help Hinostroza on some draws because that’s been a problem area.

At the end of the day the Blackhawks will cycle guys in and out of those spots and up and down between Rockford. Hartman, Rasmussen, Mashinter, and possibly Kero, Baun, Lundberg and Johnson will get looks this year. Joel Quenneville will repeatedly tinker with the lines until he finds the right combination. The safety net on this roster is that Patrick Kane has always been able to carry a line. He played many seasons with Michal Handzus as his center and still managed to produce just about a point per game. Will Kane be able to win the scoring race without Panarin…probably not, but the team might be more dangerous overall with Panarin lining up next to Toews.