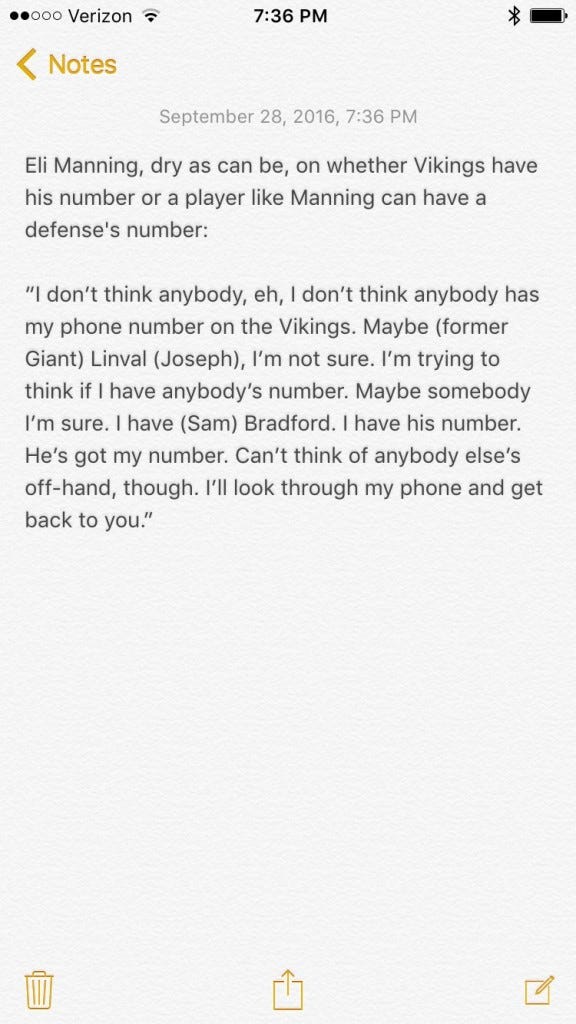 Not gonna lie guys, I was pretty concerned about the Minnesota game before I read this joke. The Vikings are 3-0 with wins against two NFC contenders and I imagine that new stadium of theirs is going to be a fucking madhouse on Monday night.

But a joking Eli is a loose Eli. Sure it may not be a traditional knee slapper, but I don’t want Eli telling the Aristocrats joke to a bunch of reporters. I want him keeping the room loose with bad dad jokes. That’s the easiest way to change the narrative from how good the Vikings D has been this season and how bad Eli has played against the Vikings in the past (3-5 record, with a 5:14 TD:INT ratio). Nobody rallies the troops like Easy E when he’s cool as a cucumber. He probably was asking linemen to pull his finger before leading game-winning touchdown drives during both Super Bowls.

And it’s reasons like that, as well as the whole two-time Super Bowl MVP thing, is why I love the living hell out of Eli Manning.

P.S. In case you haven’t heard it yet, Justin Pugh has Eli’s number and called him during Monday’s Pardon My Take. Plus Eli said he has the Barstool app, nbd.

If you don’t have iTunes listen here (HERE)