BREMERTON, Wash. – A Washington man is fuming after he was kicked off and banned from riding his town’s transit service for six months because of his smell. The issue was not his body odor, but the overwhelming smell of marijuana. Matthew Little is even banned from standing at bus stops.  According to Kitsap Transit, passengers can be banned for reeking of cat urine, human feces and bad body odor, among other bad smells. They are warned at least three times. So far this year, Little is the only passenger to be banned because of hygiene for marijuana. Little isn’t shy about his affinity for marijuana. “(I’m) never ashamed of any of it,” he said, showing off artwork, books and a vest adorned with marijuana leaves. Little is a well-known medical marijuana activist and user. “Too bad you don’t have smell-a-vision,” he said, opening a jar containing marijuana. It’s that very aroma that’s causing a stink for Kitsap Transit. “From time to time, I smell like I just smoked some marijuana probably because I just did,” he said. Kitsap Transit accused Little of emitting an odor on buses that “unreasonably disturbs others,” and banned Little for six months. “Out of the blue, I’m kicked off your buses for six months? How do I get to my doctor’s?” he asked.

To answer my own question quickly, yes. Yes this does look like a man who was kicked off public transit for a year because he stinks like weed. That’s exactly what he looks like. 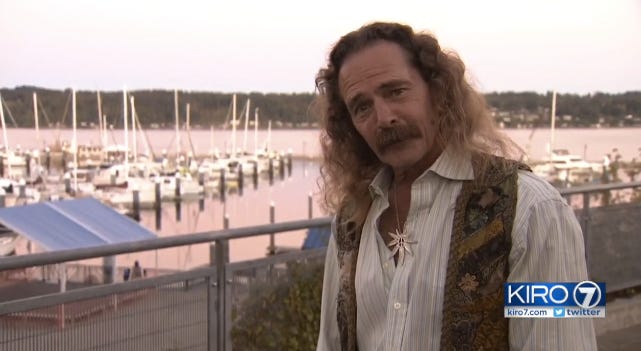 More important than that, however, is the list of what smells could get you suspended. Cat urine, human feces, and body odor? You have to imagine they’re presented in order of most common and/or most expected, right? Cat urine is number one? It’s more common to find a lady who smells like she has her felines do wet work on her than it is to find a chick who just hasn’t showered in a few days? They’re more used to running into chicks who go to Cat Litter Box Beach for some downtime rather than visit the ocean.

And human feces is number two? “You shouldn’t have a big pile of poop in your pants” is more important to list than “Hey, take a shower every now and again”? That shit tells you all you need to know about public transit. Forgetting to put on some Old Spice in the morning is literally the least of their concerns. Doesn’t even come close to being as necessary as people reeking of cat piss and straight up poop.

PS – Love Matt Little’s excuse. “How am I supposed to get to my doctor aka my drug dealer if I can’t take the bus?” Get a car, you fucking hippie.