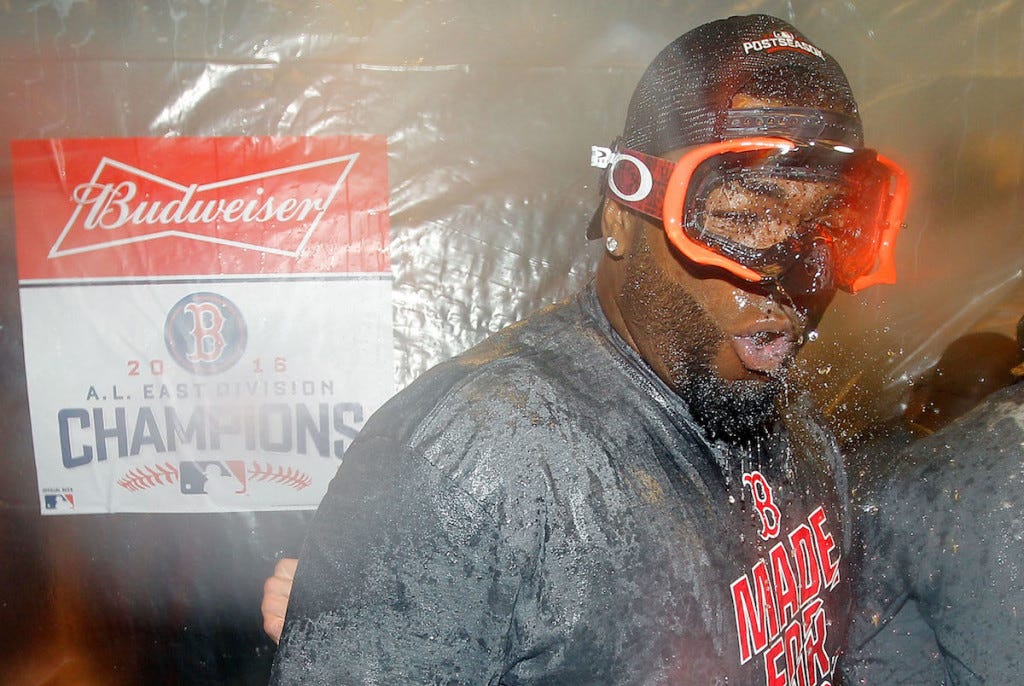 LET’S FUCKIN’ HAVE IT, JOHNNY FARRELL!! The Red Sox are your 2016 American League East division champions, and it couldn’t have happened in a more bizarre way.

That was fucking weird, man. I could smell it coming from a mile away. It was just too perfect. The Blue Jays had lost up in Toronto, so the division was already wrapped up by the time the Red Sox went to close out the bottom of the ninth. Craig Kimbrel loaded the bases, and I just thought to myself, how hilarious would it be if the Red Sox blew this game on a walk-off grand slam, and then went nuts in the clubhouse with champagne bottles to celebrate anyway? Classic.

As I’m sitting here, though, I’m trying to think back to the final day of the 2015 season. Another last place finish for the Red Sox — their second in a row, and third in four years — and a very sad and depressing finish to their season, as fans had to say their goodbyes to beloved Red Sox broadcaster Don Orsillo that day. In that moment, I didn’t see an AL East division title on the horizon. I just thought, where do we go from here? How do we fix this? Going from worst to first is hard enough once, never mind twice in a three-year span.

That being said, the Red Sox belong here. They are the best team in the American League East. From wire to wire, they’ve had the best offense in the game. Since the All Star break, they’ve had the best starting pitching staff in the American League, and their bullpen finally came around in the month of September, putting up some of the best numbers in the majors. They deserve this. I talked about how I didn’t expect a division title at the conclusion of last season, but what about back in spring training, after the Red Sox signed David Price, and traded for Craig Kimbrel?

I thought, those moves definitely make you better, but the list of question marks is so long. How is Hanley Ramirez going to fare at first base? Can Dustin Pedroia stay healthy? What will become of the third base competition between Pablo Sandoval and Travis Shaw? Can Jackie Bradley Jr. actually hit at the major league level consistently? Who the fuck is their left fielder? What are the Red Sox going to do with Blake Swihart when Christian Vazquez is ready to be called up in June? Can Rick Porcello rebound from his awful 2015? Can David Price handle Boston? Will Clay Buchholz actually stay healthy and contribute at the same time? How will Eduardo Rodriguez rebound from his knee injury? What can Steven Wright give you as a fifth starter? Will the retirement tour become a distraction for David Ortiz?

Those were all legitimate questions back in February, and because so many of those questions ended up working out for the Red Sox, today, they are division champions. And it’s not even just those questions from spring training working out for Boston that did it. At least, that wasn’t the whole story. They ended up getting help from names who weren’t even thought of back in February — guys like Sandy Leon, the fourth string catcher who came out of nowhere to become their everyday backstop. Andrew Benintendi, who was called up from Double-A, skipping Triple-A entirely, and is now your everyday left fielder. Brad Ziegler, who was a trade acquisition that came without any fanfare, yet has been one of their most reliable relievers in the second half. And even Drew Pomeranz, who apparently isn’t going to be doing jack shit for them the rest of the way, but pitched well for a decent stretch after being brought to Boston.

Then, there are the names that I haven’t even mentioned yet, and that’s because they weren’t question marks in spring for me. Those names, of course, are Xander Bogaerts and Mookie Betts. I had Mookie pegged as an MVP-type player on Opening Day last year. I was off by a year, because he’s going to finish somewhere in the top 3 this year, possibly even win the thing. After what he did in the second half of last year, I’m sure Mookie was a popular pick for MVP prior to this season, but did anybody have Porcello winning the Cy Young? Anybody?

I was all in on the Porcello comeback train, but definitely didn’t see this type of season coming. I remember picking him to win 17 games, and people thinking that either I was an idiot for actually believing that, or I was being a dick for exaggerating what his win total was actually going to be. I was dead serious, but I think the funniest part about that is that predicting 17 wins for Porcello back in March was considered a joke for going way over, but here in September, it’s a joke for being way under. When Porcello gets the ball in Game 1 of the ALDS, he’ll have earned that opportunity, and the Red Sox wouldn’t have even sniffed a division title without what Porcello has done this year.

But their work here is not yet done. This is not a team that’s just happy to be here. For some teams, cough, Cleveland, cough, that might be the case. But for the Red Sox, this is stop number one on the road to the World Series. Buckle up. Game 1 of the American League Division Series is a week from today.

Radio plug: I’ll be talking Red Sox with Zolak and Bertrand today from 10:50am to 11:50am, and then back on again at 6pm to 7pm doing the Baseball Reporters with Tony Massarotti on 98.5 The Sports Hub. LISTEN LIVE HERE.