If you are interested in watching a steaming pile of crap, we have a breakdown of Ryan Fitzpatrick’s game last week right here. If you are interested in watching New York Jets fans freak out about the quarterback position, you can check out our Twitter mailbag below. Thanks as always for your questions and make sure to subscribe to the podcast. Our latest episode is embedded at the bottom of the article. On to the questions.. 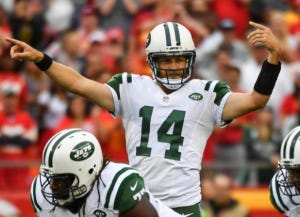 @TurnOnTheJets@barstoolsports why not go to geno at some point @KC? It was clear fitz was off by late 3rd Q yet game was still in reach.

It is pretty clear the Jets have limited to zero faith in Smith. If you aren’t going to pull a guy after he throws his 3rd, 4th and 5th interception, who looks like he is being paid to throw the game, when are you going to pull him? I guess you could make the argument they wanted to avoid stirring up a potential quarterback controversy but that is dumb. Sunday’s game was winnable in the 4th quarter. Sometimes a guy just doesn’t have it, making an in game change doesn’t mean a permanent change.

I agree that Marshall has not done enugh positive to merit there being no reprecussions for him handing 14 points to the other team over the past 2 weeks. This is actually a moot point now because he has a torn labrum and will be out a month or so. The Jets have brought back Jeremy Ross, who actually outplayed Marshall at returner and receiver in the preseason. Marshall has a future here but he has to improve his ball security before giving him a larger role.

.@TurnOnTheJets why do the Jets have a backup QB they’re afraid to put on the field?

It is poor roster management to have two quarterbacks that you keep inactive every week and then a backup quarterback you refuse to play. If the Jets are not going to use Smith as a conventional backup, who comes in when their starting quarterback is skidding off the rails, then just release him and make Bryce Petty the backup. This blogger thinks Smith is better than Petty but if the team doesn’t share that opinion, than there is no reason to keep Smith.

I suppose it isn’t crazy to give Petty a chance down the stretch if the Jets are 3-10 or something like that. Yet, the reality is the Jets already have shown their skepticism about him in the long term by drafting Christian Hackenberg in the second round and their skepticism of him in the short term by keeping Geno Smith around. Petty’s ceiling is likely a career backup.

@TurnOnTheJets@barstoolsports Why did Fitz do that?

Because he enjoys seeing us miserable? More seriously, people always mischaracterize Fitzpatrick as some heady, conservative game manager because he is an un-athletic looking dude who went to Harvard. The reality is Fitzpatrick is extremely reckless with the football, an occasional playmaker who goes off script/outside of the offense and an occasional turnover machine.

@TurnOnTheJets@barstoolsports Will ASJ go the way of Scott Chandler?!? They wasted his talent in BUF. 6’8″ with soft hands… SMH — Girlish Mehta (@Girlish_Mehta) September 28, 2016

I would temper expectations for ASJ, who has a ton of size and talent but has off the field issues to deal with and will need to acclimate to a new offense. The Jets have got nothing from their Y tight end in the passing game and hopefully ASJ can be a threat down the seam a few times per game. At least once per quarter the Jets should run four verticals with ASJ and Enunwa on the inside and Marshall/Decker on the outside. Somebody is going to have a mismatch and hopefully Fitz won’t mess it up.

@TurnOnTheJets@ezbeezy214 we won’t get rid of any of the rookie receivers when Devin comes back right?

Charone Peake will probably go to the practice squad when Smith comes back.