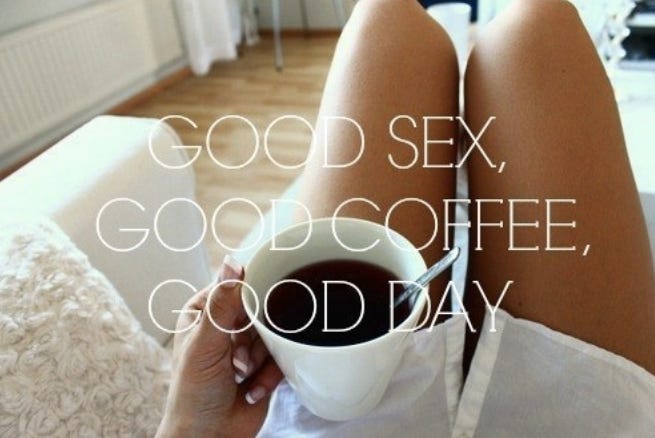 (GrubStreet) — A Maryland company called Stiff Bull has invented an “all-natural herbs coffee” that it claims can improve men’s libido and sexual performance. The coffee is, ahem, “enhanced” with herbs from the jungles of Malaysia like guarana, maca root, and tongkat ali. If you’re not sure it’s right for you, Stiff Bull’s team says it’s great for adults who want “to maintain an active relationship” and promises the “awesome effect” will last two or even three days. Sounds time-consuming! Also, it’s probably not something you should drink.

The FDA recently added the concoction, which is produced in Malaysia, to its list of Tainted Sexual Enhancement Products. Laboratory testing done by the agency confirmed the coffee contained an unlisted ingredient in desmethyl carbodenafil, which is similar to the active ingredient, sildenafil, used in Viagra. Problematically for consumers, desmethyl carbodenafil may interact with nitrates, which are found in certain prescription drugs and taken by men with diabetes, heart disease, and other conditions. It can also lower blood-pressure levels to, the agency writes, “dangerous levels.” Stiff Bull’s Keith Hanson tells Indy 100 that desmethyl carbodenafil was never part of Stiff Bull’s brew, and it was added by a cheap manufacturer looking to cut down on costs.

Ummmm… worth it? I’m not a coffee guy. Never been a coffee guy, makes me too jittery. But if you’re giving me the ability to fuck good then I’m all in. I don’t even know what the fuck this shit could possibly do but I’ll believe herbs from Malaysian jungles do absolutely anything you tell me they do. 100 out of 100 times I’ll just nod and say, “Yup, of course, everyone knows that’s what that herb does.” Make my dick hard as a kapok tree and give me the stamina of a panther? Absolutely. Of course. I graduated elementary school, bro, I know the herb turns my fuckstick into a weapon. Thanks.

And no, I don’t give a shit about the risk of death. Anything you do, you’ve gotta be willing to die for it. This dick coffee can kill me? Well, so can crossing the street. All I care about is the fact that it works. If I lay it down then die then so be it, put “Please a woman” on my tombstone. I’ve tried plenty of “get better at sex” things that didn’t work. I watched YouTube videos, used toys, used numbing condoms, ate bananas before getting drunk (potassium is supposed to make sure you don’t get whiskey dick, little tip), I’ve done all that. Still can’t make a girl cum. If this is what does it and then takes my body to heaven I’ll be perfectly okay with that. Die a happy man with a happy then terrified woman next to me.